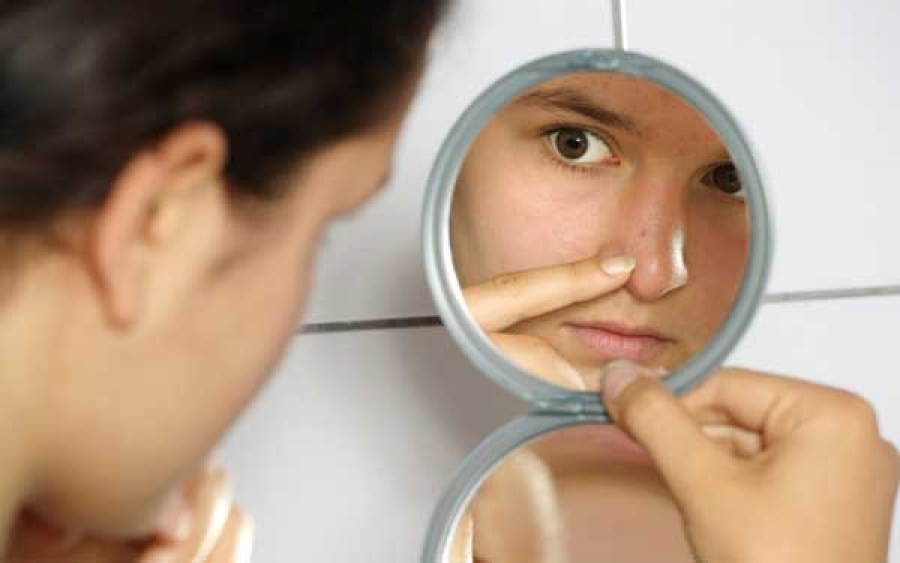 A woman looks in the bathroom mirror, taking inventory. Her skin has seen thirty-something summers, perhaps more. There is a nick of indentation at either corner of her mouth, a deepening line or two beside each eye, some expressive wear, perhaps, to the forehead. She touches these places and considers her options. Maybe a series of exfoliation treatments before her next birthday, maybe some wrinkle fillers.

But these familiar indicators of the aging process don’t trouble her as much as the growing cluster of comedones and breakouts at the side of her chin or appearing on her jawline.

She’s read that fabric softener in the wash can cause these eruptions; the softener coats the fibers of the pillowcase, which in turn coats the skin. Hmmm, maybe that’s it. Or maybe it’s that new “moisturizing” foundation she bought. It can’t be acne, she reasons. She didn’t have acne as a teenager. And now she’s too old! Besides, mothers of teenagers can’t have acne — her daughter does have the occasional flurry of outbreaks across her forehead and cheeks. The woman dabs a little of her daughter’s over-the-counter acne product on the “bumps”, and wonders what’s happening with her skin.

In a word, it’s acne. Before adult acne may be effectively addressed, however, it must be correctly identified. Many adults experience confusion, disbelief, or even denial about their condition, believing it is exclusively an adolescent condition. Technically speaking, even one “bump” or blemish qualifies as acne, although we generally use the term to describe activity of more severity and frequency than a lone pimple. We also tend to associate acne with youth, but this is statistically a misnomer. Recent studies reported by the American Dermatology Association suggest that adult acne is drastically on the rise, with more than 17 million U.S. adults diagnosed in the past decade. At the same time, the median age for patients suffering from acne has been gradually increasing to today’s age of 26.5.

The facts of acne have always been shrouded by myth and misinformation. Past generations supposed that teens became stricken with acne as the result of harboring “impure” thoughts, or as a kind of topical punishment for eating pizza and chocolate. Today, new and equally misleading myths surround adult acne. Some theorists associate acne with the Western lifestyle, specifically the high sugar, high fat diet, noting that acne is largely absent from many non-industrialized populations. While limiting consumption of fat, salt, sugar and all refined carbohydrates is healthful from any standpoint, there is no definitive link between diet and acne, for adults or teens.

Adult acne typically differs from teen acne in significant ways, and the age, or more importantly the age-related condition, of the client’s skin dictates the most effective treatment. According to Joshua M. Wieder, a dermatologist in private practice in Los Angeles, “Older skin heals more slowly. Healing takes longer, redness persists longer, and post-inflammatory hyperpigmentation may take longer to fade.”

And while hormones play a role in all acneic activity, the specific dynamics differ between teens and adults. For teens, the onset of acne relates specifically to the great, steady, sweeping wave of hormonal activity known as puberty. Wieder comments, “Adult acne, on the other hand, seems to be more closely associated with hormonal fluctuations, either monthly menstrual cycling, changes or discontinuation of an oral contraceptive pill, or changes relating to pregnancy including breast-feeding or the post-partum phase.”

This analysis contradicts the notion we have of teens as bundles of hormones gone haywire, and ourselves as adults being more solid and stable, neurochemically speaking, when in fact the reverse may be true. Another aspect of chemical triggers for acne, and perhaps the most significant trigger in adults, is what is loosely known as stress. While too much caffeine, too many commitments and responsibilities, and not enough sleep may not literally cause adult acne, the familiar stressors of grown-up life can fan the flame. Deep breathing, more vacation-days, and learning to prioritize and simplify – “de-scheduling”— as a life-skill can help, but stress is the reality for most people, most of the time.

From an endocrinology aspect, stress spikes testosterone and cortisol levels. Testosterone directly increases sebaceous activity, and cortisol flicks the “on” switch inside the melanocyte, resulting in possible hyperpigmentation. Because sebaceous glands are numerous on the face, adult acne generally is restricted to this area, specifically the lower face, neck, and sides of the chin, which in the ancient art of Chinese face reading, corresponds to the adrenal glands and reproductive areas. By contrast, teen acne may appear on the chin, nose, forehead, upper cheeks, chest, and back as well. Wieder further notes, “Adult acne may be triggered by stressful situations, either emotional or physical,” adding that the acne may take the form of stress-induced flares as well as more chronic and persistent inflammation.

The first challenge in treating adult acne is getting the client to accept the condition, and to be willing to call it acne. The second step is to address a program of care specific for adult acne. Most drugstore products for teens are too harsh for skin which has begun to age. “Yes, adult skin may more likely be irritated or dried out with the same products used by teenagers,” comments Wieder. In particular, Benzoyl Peroxide, found in nearly all over-the-counter acne preparations, must be used judiciously as skin ages, since it can lead to hyperpigmentation in darker skins.

Since older skin is more prone to persistent redness as the result of acneic inflammation, the strategy must shift from simple treatment to prevention, in order to reduce damage to the skin as early in the acneic process as possible. Ideally, preventing adult acne from ever reaching the state of full-blown inflammation begins with an in-depth skin analysis by a licensed skin therapist. This examination and analysis, performed visually and manually under magnification, gives the skin therapist a highly individualized “map” of the client’s skin condition, and the potential progression of the acne and othe conditions.

The face mapping process may be critical to helping both the therapist and the client get past those persistent acne myths. For instance, many adults believe that they cannot have acne because their skin doesn’t feel oily to the touch – in fact, they may have evidence of dryness associated with age, such as fine lines around the eyes, thinning of the epidermis, some UV damage, etc. But the fact is, while acne may seem to correlate with high sebum production among adolescents, acne is common among adults whose skin would not be described as oily.

Salicylic Acid may be used successfully in varying strengths to clear adult follicles without causing shedding, flaking, or erythema (reddening). The first line of defense may be considered a pre-emptive strike: proper cleansing. A non-irritating, naturally foaming cleanser may utilize a gentle .5 percent concentration of slicylic acid for clearing congestion in combination with soothing botanicals such as licorice, calendula, milk thistle, lemon peel, arnica, and bergamot to help prevent future breakouts. Tea tree, burdock, eucalyptus, golden seal, and chamomile may be included to help eliminate bacteria, while camphor and menthol cool inflammation. In an overnight gel formula, Salicylic Acid in a stronger concentration of 2 percent may be helpful when combined with yeast extract, caffeine, rosemary, green tea, and spirea extract to slough off pore-clogging skin cells to prevent future breakouts. Salicylic acid, in combination with kaolin and bentonite clays and natural astringents such as horse chestnut and cinnamon bark, often is effective as a clearing, calming mask for the T-zone or the entire face, as indicated by the therapist’s face mapping findings. In addition, Hyaluronic acid may also be helpful in formulas for adult acne, as a hydrating ingredient.

Americans have an undeniable penchant for youth. Parents often dress like their teenaged children, and adopt their mannerisms and speech, so perhaps it is somehow ironic justice that more and more adults are troubled by this condition once associated exclusively with the young. Whether Dad should still wear a backwards-baseball cap and call his colleagues“Dog,” or whether Mom should wear that faded denim micro-mini, are matters of taste and opinion. Adult acne, however, must be understood for what it is and given grown-up treatment not included on the kiddie menu.

Annet King, Director of Training and Development for The International Dermal Institute (IDI), is both CIDESCO and CIBTAC certified with more than 18 years of skin care industry experience. Her responsibilities include overseeing the vast IDI teaching staff around the globe, as well as developing the curriculum taught in all 45 countries. Her dynamic personality paired with her expertise make her one of the most in-demand guest speakers at educational events worldwide.