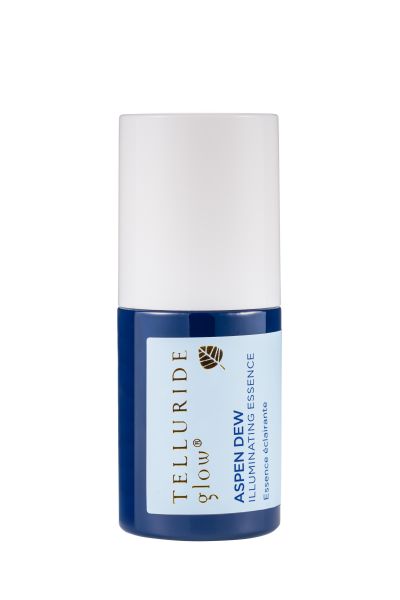 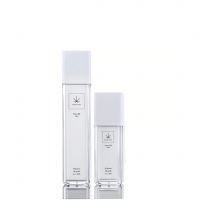 Packed with Full/Broad - Spectrum CBD oil, Vitamin B-12, and therapeutic essential oils, our lotion is designed to preserve the natural balance of the skin and revitalize your face and body for the ultimate skin soothing and calming sensation.

Scent is clean and sensual. The texture is velvety yet weightless, gives skin the look and feel of pure silk.
000-000-0000  kanavita.net
Published in Moisturizers for Normal Skin
Read more... 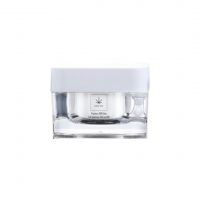 Kana Vita Balm is infused with the maximum beneficial strength of CBD and contains more than double the CBD potency found in most other formulas. Ideal for spot treatment, or as an overnight mask, this balm is perfect for targeting problem areas. 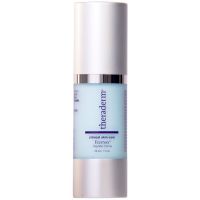 This lightweight crème is formulated with the goal of decreasing the appearance of lax neck skin and reducing forehead wrinkles and other facial lines while moisturizing. Ingredients include our patented Soluble Keratin Peptides to help visibly reduce signs of aging.
800-443-7549  https://theraderm.net 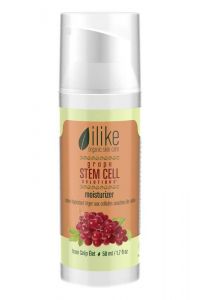 Written by GlyMed Plus 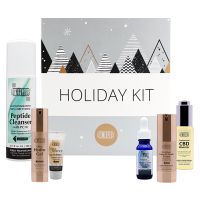 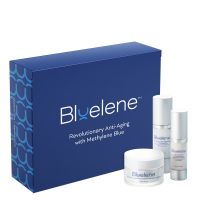 Experience all that Bluelene has to offer with our limited edition Anti-Aging Trio! This is the perfect gift for the skincare lover in your life, the perfect travel companion and a great addition to your bedside for easy access before you head to sleep.

Proven to help stop wrinkles and fine lines from maturing, this cream leaves the skin with a healthy, radiant glow. 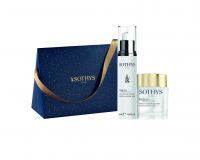 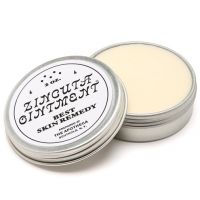 Zincuta (zin-coot-a) dates back to 1890, and is still made in the USA of the highest-quality ingredients. Zinc oxide for rapid healing and beeswax for itch relief – and an excellent treatment for burns (sun and otherwise), chafes, abrasions, raw sores, insect bites, even eczema and psoriasis. Cools and soothes as an aftershave too. Also includes wound-healing styrax benzoin and pleasant-smelling essential oils.
9179817295  zincuta.com 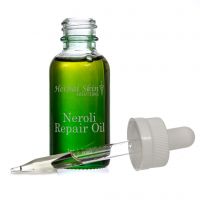 Do you have client's that are reactive from being overly dried out during dermaplaning? Try OIL-planing with Neroli Repair Oil for a nourishing glide.

Illuminate your skin with abundant luster! Powerfully repairing peptides and extraordinary lightening and brightening actives combine to release immediate results for a redefined and more luminous face, eyes, and lips! 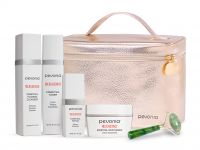 Recapture a porcelain-smooth complexion! A powerhouse blend of vitamins C & E provides the ultimate solution to even and smooth your skin’s texture. Diminish visible age spots and sun damage for a dramatically refined complexion. 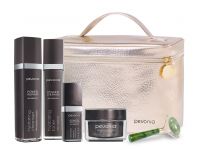 Rejuvenate and replenish your skin! This de-aging collection of best-sellers features a powerful blend of marine collagen. It works to replenish skin nutrients while softening lines and wrinkles for instant youth-reviving benefits. 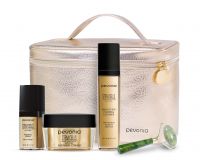 Indulge in ultimate rejuvenation! Infused with a revolutionary blend of argan and comfrey stem cells and supercharged de-agers, your restored complexion will have everyone asking for your skincare secret!

Astonishing proof that elegance is eternal! Indulge in ultimate rejuvenation for total skin renewal! These Timeless treasures lavish the skin with some of nature’s finest phyto extracts and pure caviar to deeply nourish and counteract mature signs of aging.

Written by Under Skin 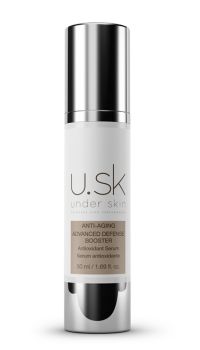 An antioxidant formula that hydrates and promotes cell renovation. The association of powerful antioxidants such as ferulic acid, maslinic acid and the U.SK Biocomplex™ (a combination of olive tree leaf extract with biopeptides), micronutrients and vectorized hyaluronic acid, improves skin texture and relief, promoting a feeling of increased thickness and filling of the skin tissue. This combination decreases wrinkle appearance and helps with uniform skin pigmentation as well as featuring hydrating and soothing properties to protect against the oxidizing stress of the environment.
800-870-7818  underskin.com

Written by Under Skin 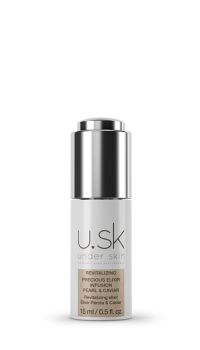 This product has been specifically formulated for skin hydration and revitalization. The high volume of protein and vitamins provided by the pearl and caviar extracts promotes cell renovation. This decreases the gradual appearance of wrinkles as well as hydrating and maintaining the elastic feeling of the skin which produces a more uniform texture.
800-870-7818  underskin.com 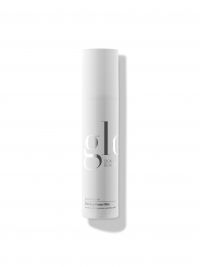 Glo Skin Beauty is Calming Flower Mist provides instant cooling relief with a unique blend of soothing essential oils. Free of fragrance and dyes, this formula is designed to calm and hydrate even the most sensitive skin. It prepares skin for the optimal benefits of serum and moisturizer application.
1-800-232-0398  gloskinbeauty.com 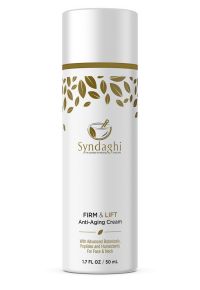 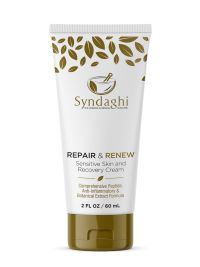 The hydrocortisone-free REPAIR & RENEW Sensitive Skin and Recovery Cream delivers soothing ingredients and moisturizers through colloidal silver combined with an advanced peptide that calms irritated skin and restores its integrity. This cream is dermatologist-tested, phthalate and paraben-free and is suitable for all skin types.
424.317.5200  www.syndaghi.com 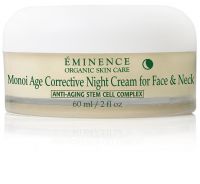 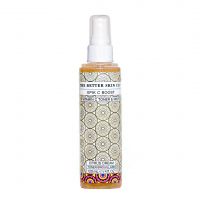 Written by The Better Skin Company 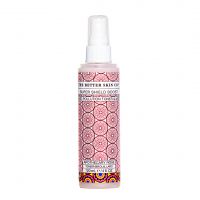 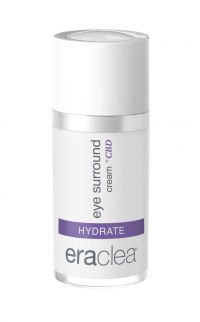 eraclea skin care’s new eye surround cream with CBD oil ($65) is a lightweight, non-greasy, hydrating and firming cream designed specifically for the delicate eye area. It helps minimize the appearance of fine lines, dark circles and under-eye puffiness. • Formulated with CBD oil to minimize the appearance of fine lines and wrinkles under and around the eye, as well as the lid
• Special proteins work to minimize the appearance of under-eye puffiness and dark circles, while firming the sensitive skin around the eyes
• Soothes and refreshes the delicate eye area
• By utilizing eraclea’s HylaFusion®, this formula provides unusually long-lasting hydration to more effectively deliver key ingredients to the skin’s deeper layers, thus increasing their health benefits. HylaFusion® is composed of three different hyaluronic acid molecules: low and high molecular weight hyaluronic acid and the patented HylaSponges® 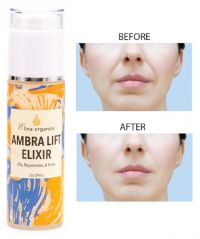 Like a facelift in a bottle, Ambra Lift is scientifically proven to visibly lift, energize, tone, and firm

As the winner of the 2019 DERMASCOPE Aestheticians' Choice Award for "Best Anti-Aging Moisturizer”, Elina Organics Ambra Lift Elixir is a bio-energized skin moisturizing and firming treatment with extracts of Baltic Amber, Marine & Silk Peptides, Hyaluronic Acid and other effective skin nutrients. 100% transdermal, organic, fresh, hand-made, and cruelty-free, it is scientifically proven to increase the expression of anti-aging and anti-wrinkle genes, while activating anti-oxidant and anti-inflammatory genes. The star ingredient, Baltic Amber, has been prized for centuries for its anti-aging properties, stimulating the production of collagen.

Like a facelift in a bottle, it visibly lifts, energizes, tones, and firms. State-of-the-art genomic testing showed it increases the expression of Sirtuin-1 – a key antiaging gene. After just TWO applications of Ambra Lift over a span of just 48 hours, it was concluded through independent scientific testing, that Ambra Lift is scientifically proven to positively change the skin. Using the gene expression method called Quantitative Real-Time PCR (polymerase chain reaction; qRT-PCR) to measure what genes are “turned on or off”, gene markers determined the following about Elina Organics Ambra Lift Elixir:

• It increased the expression of Sirtuin-1, a key anti-aging gene.

• It activated the expression of genes that promote anti-wrinkle effects. This reduces visible wrinkles, expression lines, blemishes, pigmentation changes, discolorations and other environmentally related conditions of the skin.

• It activated anti-oxidant and anti-inflammatory genes involved in protective cellular mechanisms.
In the end, exposure to Elina Organics Ambra Lift produced statistically significant changes in 47 out of 91 genes tested after a 48-hour period!
View the scientific study on the effects of Ambra Lift

3 in 1 product: Moisturizer, makeup primer, and the protection from pollutants. Moisturizes and refreshes face, neck, and neckline for 14+ hours of hydration and comfort. Reverses/prevents signs of aging and sensitivity
1-800-468-4DNA  www.ATZEN.com 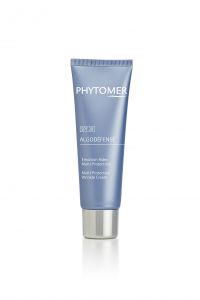 Guinot’s new Crème Pur Confort SPF 15 is a daily cream for sensitive skin that fights reactions to environmental irritants. Some skin types are extra sensitive to the surrounding environment, causing reactions to everything from water to wind to emotions – which can lead to redness, dry skin, and irritation. Guinot’s new cream offers daily protection against these internal and external irritants, while helping to rebuild the skin’s natural defenses. Using ingredients such as SPF 15 UV filters, phospholipids, and dermaline, it softens and evens out complexion with a refreshing scent compatible with even the most sensitive of skin.
(212) 532-1030  www.guinotusa.com

Guinot’s new Crème Lift Summum fights the effects of aging. With age, support fibers such as elastin and collagen (which give skin its density and firmness) decrease, causing the skin to become thinner, lose volume, and develop wrinkles. As a welcome alternative to a facelift, this new cream uses Guinot’s key ingredients Longevitine and Sea Buckthorn to help restore density to the skin and minimize the appearance of wrinkles for a firm and smooth complexion.
(212) 532-1030  guinotusa.com

Published in Moisturizers for Aging Skin
Read more...
Page 1 of 2
How to resolve AdBlock issue?
X