Autoimmune Disease and the Skin 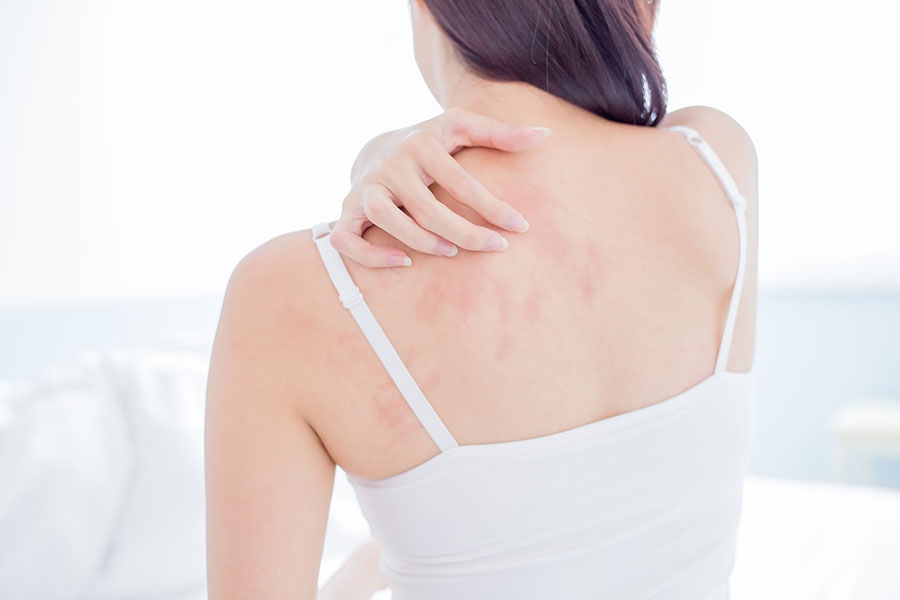 While it affects many people, autoimmune diseases does not have a lot of information as to its cause. What is known is that, for autoimmune patients, the body is unable to tell the difference between healthy cells and viral or bacteria agents. This causes white blood cells to attack and destroy other cells and tissues in the body. Patients find that their skin becomes drier, sometimes changes color, or can have photosensitivity.

In the following article, we will examine a few of the autoimmune diseases, the symptoms, and some approaches to provide relief and healing both in the treatment room and at home. We will also address you, the professional, and how to care for yourself and those you are treating with these issues.

While there are several autoimmune disorders that affect the skin, we will focus on the following more common ones: psoriasis, scleroderma, alopecia areata, vitiligo, and eczema.

PSORIASIS
According to Everyday Health, “psoriasis is a chronic autoimmune disorder that manifests as skin redness and irritation. There are five different types of psoriasis: guttate, plaque, inverse, erythrodermic, and pustular. The most common is plaque psoriasis, in which raised, red skin patches are covered by flaky, silver-white patches of dead skin, known as scales. Current research indicates that psoriasis is most likely an inherited disorder. Often, people have a family member with psoriasis or another autoimmune disorder.

Psoriasis can come and go throughout a person’s lifetime. Triggers for an outbreak include infections, skin injuries, sun exposure, prescription medications, alcohol, or stress. Those with compromised immune systems from HIV or chemotherapy are also at risk for outbreak.

The NIH reports that nearly 7.5 million Americans have psoriasis. Onset of symptoms usually appear between ages 15 to 35, although all ages can be affected. Approximately 30 percent of psoriasis sufferers also have arthritis. This is known as psoriatic arthritis.”

SCLERODERMA
Scleroderma is a connective tissue disorder. According to Everyday Health, “this means that blood vessels, muscles, and organs can be affected. Localized patches of skin thickening can occur. There are two types of systemic scleroderma, progressive sclerosis (SS) and CREST syndrome. In progressive sclerosis, the esophagus, intestines, lungs, heart and kidneys are compromised. The CREST syndrome is so named for its symptoms: calcinosis (calcium accumulation under the skin), Raynaud phenomenon (redness or blueness of fingers and toes), esophageal dysfunction, sclerodactyly (thickening and tightness of skin around fingers and toes), and telangiectasia (red skin blotches caused by dilated blood vessels).

In addition to skin symptoms, joint pain, shortness of breath, wheezing, constipation or diarrhea, bloating, weight loss, heartburn, and eye itching or burning are frequent. This illness is more common with women in their 30s and 40s.

Environmental exposure to silica dust and PVC are risk factors for this illness. Approximately 300,000 people live with this illness in the United States. 33 percent have one form of the systemic type.”

Treatment Options
As with most severe autoimmune disorders, the traditional treatments are immunosuppressants or corticosteroids with varying degrees of success. For skin issues, experimentation with herbal or aromatherapy may provide relief.

ALOPECIA AREATA
According to the National Alopecia Areata Foundation, “alopecia areata is a common autoimmune skin disease causing hair loss on the scalp, face, and, sometimes, on other areas of the body. 6.8 million people in the United States are affected by it. All ages, both sexes, and all ethnic groups can develop alopecia areata. It often appears in childhood and can be different for everyone who has it.” According to WebMD, “With this autoimmune disease, the hair follicles are attacked, and hair falls out in quarter-sized round bald spots.”

Treatment Options
Hair can grow back with the use of corticosteroids, topical immunotherapy, or minoxidil (Rogaine). Varying degrees of success can be achieved depending on the individual.

VITILIGO
According to Onosec Medical, “vitiligo is not classified as an autoimmune disorder. It is a skin condition which affects the melanocytes – the cells that create pigment in the skin. Vitiligo destroys the melanocytes and bleaches the skin creating white patches. This can occur anywhere on the body including the inside of the mouth, nose, and retina. The hair surrounding the patch can also turn white.

Worldwide, 0.5 to 1 percent (65 million) people are affected by vitiligo. According to The National Institute of Arthritis, Musculoskeletal and Skin Diseases, little is known about how vitiligo occurs. What is known is that it can run in families (30 percent), it affects all racial groups, both men and women, and sometimes, there is a correlation between the onset and skin trauma, rashes, or a bad sunburn.

Treatment Options
The use of broad-spectrum sunscreens is paramount for those with vitiligo.” Otherwise, no known treatment is available.

ECZEMA or ATOPIC DERMATITIS (AD)
According to Healthline, “10 percent of all adults in the United States and 25 percent of children worldwide are affected by eczema. Also known as atopic dermatitis, this has recently been confirmed as being an autoimmune disorder. AD is an inflammatory disorder in which the skin becomes covered in itchy, scaly lesions. These lesions cause cracks in the skin’s outer barrier, exposing patients to infection. AD is always accompanied by activation of the immune system.

There are several different types of eczema. Contact dermatitis is caused by contact with an irritant. Burning, itching, and redness occur. The inflammation goes away when the irritant is removed. Dyshidrotic dermatitis affects the fingers, palms of hands, and soles of feet. It causes itchy, scaly patches of skin that flake or become red, cracked, or painful. This is more commonly found among women. Nummular dermatitis causes dry, round patches of skin in the winter, usually on the legs. It is more common in men. Seborrheic dermatitis causes itchy, red, scaly rashes on the scalp, eyebrows, eyelids, sides of nose, and behind the ears.

Treatment Options
By far the most common treatment for all types of eczema is topical steroidal creams. There are many available through a dermatologist or less potent versions available over-the-counter.

According to Dr. Emma Guttman-Yassky, associate professor of dermatology at the Icahn School of Medicine at Mount Sinai in New York, “there is a promising new drug, dupilumab, which targets specific genes, IL-4 and IL-13, to reduce skin symptoms in people with atopic dermatitis.”

Alternatively, various topical aromatic or herbal creams and ointments can be used to provide relief from the relentless itching of eczema. As a clinical aromatherapist, and one who has had personal experience with eczema throughout my life, I have found that consistent cleansing of the lymphatic system through following a dry brushing protocol coupled with the use of aromatherapy has been extremely helpful. Using essential oils, such as cistus (cistus landaniferus), turmeric (curcuma longa), blue tansy, (tanacetum annuum), angelica (angelica archangelica), or rhododendron (rhododendron anthopogon) in dilution is very effective.

I have also noticed with my clients with autoimmune disorders that consistent dry brushing has improved their energy and overall sense of well-being, despite the illness.

Diet can also play a huge role. I discovered that wheat is a trigger for me. Having accepted a gluten-free lifestyle has virtually eliminated eczema outbreaks for me.

TREATMENT OPTIONS IN THE SPA ROOM
When dealing with a client who has an autoimmune disorder, plan your treatment to minimize inflammation. Know that their skin is apt to be more sensitive and reactive to products and stimulation. Being gentle is the key. Wonderful anti-inflammatory essential oils that can be used successfully are chamomile roman (anthemis nobilis), chamomile German (chamomellia recutiata), or turmeric (curcuma longa). One drop mixed with cool water on a cotton pad applied to red, angry skin will reduce the inflammation within moments.

TAKING CARE OF YOU, THE PROFESSIONAL
When working on a client with an active rash, follow your procedures for self-care by gloving your hands. While none of these autoimmune skin disorders are known to be contagious, it is always advisable to err on the side of caution. Always take care of you, first!

Mary Ellen Dorey is a registered aromatherapist (RA) through Aromatherapy Registration Council (ARC). She has practiced aromatherapy with reflexology in Plano, Texas for 10 years. She created a full line of aromatherapy products for BodyCare, WellCare, SkinCare and Natural Perfumes. She offers classes and seminars on aromatherapy and natural perfumery. She has been featured in many publications including The Dallas Morning News, Women’s Wear Daily, The Wall Street Journal, and USA Today. Her products can be found at doreyaromatherapy.com or through Facebook, LinkedIn, Pinterest, and YouTube at doreyaromatherapy; twitter@doreyaroma.