When the (Sun) Damage Is Done: How to Repair the Skin and Protect it from Future Sun Overexposure 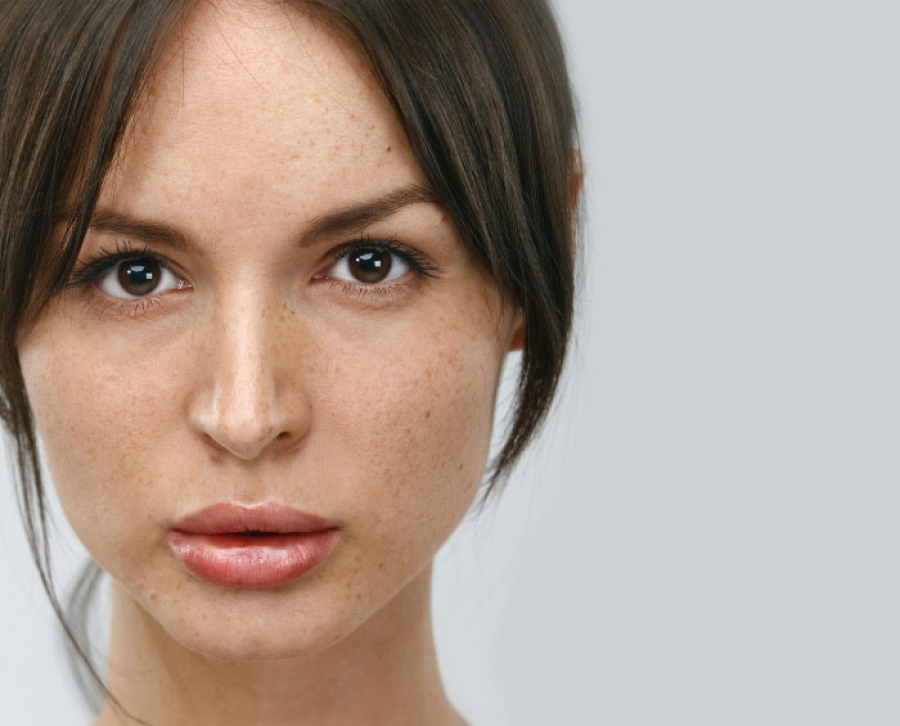 Throughout history, the skin's color, whether a result of sun tanning or sun shielding, has served as a sort of status symbol. For many years, pale and refined skin was almost globally revered and sometimes attained through drastic measures. It was not until the 1920s that the tan became fashionable; since then, there has been a rise in sun damage and skin cancer rates. Is there one right solution to achieving the benefits of sun exposure while avoiding the unpleasant side effects for people of all genetic profiles?

'When the Sun Damage is Done' from Dermascope on Vimeo. 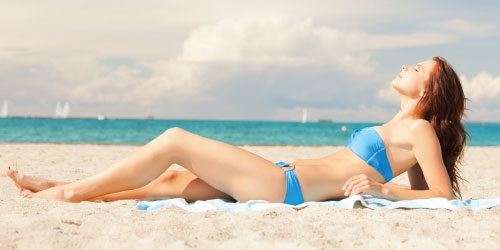 THE HISTORY OF SUNBATHING
In both the United States and Europe, the tan has gone in and out of fashion, but the preference for fair skin did not truly end until the conclusion of the Victorian Era. Before the close of that era, a light-skinned appearance was artificially achieved with arsenic and lightening powders and clothing at that time was tailored to shield the skin from the tanning effects of the sun's rays. In the 1920s, almost suddenly, people began exchanging their pale, refined skin for the bronzed appearance previously regarded for the lower class or those who had to labor outdoors. Legend has it that it was fashion mogul, Coco Chanel, who began the sun-kissed trend in the 1920s when she received too much sun while on holiday in the Mediterranean. According to the story, Coco Chanel returned home from her Mediterranean vacation and shortly thereafter, high society fans began chasing the sun's kiss and trading in their pale skin. In Europe, Parisians fell in love with Josephine Baker, a caramel-skinned singer in Paris, and idolized her dark skin. These two women were the leading figures of the transformation that tan skin underwent, in which it became perceived as fashionable, healthy, and luxurious.

SOLAR BENEFITS
Today, it is understood that warm rays of sunshine can have damaging effects on the body. It may be responsible for as much as 90 percent of visible aging, including keratosis, brown discoloration and wrinkles; but, a dose of the sun does have benefits as well.

Moderate sun exposure contributes to the production of vitamin D by the body, regulating sleep cycles and improving the immune system. Dr. Richard Weller, a leading researcher and dermatologist, has concluded through studies that a regular, moderate dose of the sun could lower blood pressure and that, although the benefits of sunlight are often attributed to vitamin D, a gas called nitric oxide is also important. Made when the sun hits the skin, nitric oxide lowers blood pressure when it enters the bloodstream. Although the reduction is small, it could make a big difference. 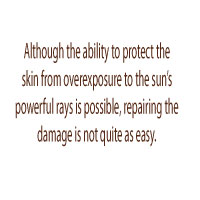 RISKS OF PROLONGED SUN EXPOSURE
While moderate exposure to the sun may contribute to an improved immune system and a reduced risk for stroke and heart attack by increasing the body's production of vitamin D and nitric oxide, excessive exposure to ultraviolet rays has been linked to negative health effects. Some of the negative side effects of too much sun exposure include sunburn, a depressed immune system, and an increased risk of skin cancer. Furthermore, excessive sun exposure is considered to be the single biggest cause of visible aging, so while bronzed skin may be attractive to some, the cumulative, long-term effects are certainly not. The unsightly signs of aging that are always complained about, such as loss of skin elasticity, uneven skin tone, and wrinkles, are all a result of overzealous sun worshiping or cumulative sun exposure.

While some people possess the ability to tan with ease, others do not have the genetic benefit of producing the rich, golden-brown tones that ultimately serve to protect the DNA from the damaging effects of the sun. For those individuals who fall into the lower classifications on the Fitzpatrick scale, they should be warned that though they may desire the appearance of bronzed skin, they are at an increased risk of developing the negative side effects related to sun exposure and should take extra precaution when outdoors.

Fears surrounding the risks of tanning were confirmed in 2009 when it was found that rates of malignant melanoma in the United Kingdom had more than quadrupled in the past 30 years and that it is the most common form of cancer among those between the ages of 15 and 34. Furthermore, the World Health Organization has found that people who use tanning devices before age 30 are 75 percent more likely to develop melanoma.

The Sunbed (Regulation) Act, introduced in the United Kingdom in 2010 with much help from Girls Aloud singer and ex-tanner Nicola Roberts, made it illegal for any business to allow people under the age of 18 to use tanning beds or any electrically powered device that emits ultraviolet radiation to produce a tan. However, there is no regulation on how often an adult can use a sunbed. 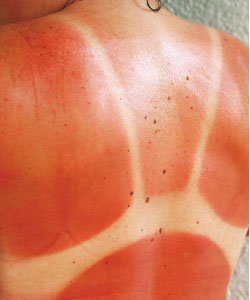 In December 2015, the FDA proposed tanning bed age restrictions in the United States in an effort to protect consumers. Stephen Ostroff, M.D., the acting FDA commissioner at the time, stated, "Today's action is intended to help protect young people from a known and preventable cause of skin cancer and other harms. 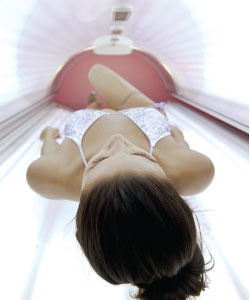 THE SKIN'S UNIQUE RESPONSE TO THE SUN
A person's skin color and their ability to tan is determined by their genetics. Natural, unsunned skin can be appreciated in a range of colors from dark brown to nearly translucent. In 1975, Harvard dermatologist Thomas B. Fitzpatrick devised the Fitzpatrick scale, which described the common tanning behavior of various skin types.

REVERSING SUN DAMAGE
More than likely, almost everyone has gone outdoors unprepared and suffered the negative consequences of the sun. For those who have been or still are repeat offenders, the battle with uneven skin color, rough skin texture, and brown spots, at a minimum, is seemingly constant. Before giving up, remember that there are therapeutic interventions available, including professional skin treatments and homecare products, that can reverse the damage and restore the skin to a more youthful, refined quality. Of course, consistency is key and diligence in the application of these beneficial skin care product is crucial to turning back the damage.

Some of the ingredients that should be looked for when treating sun damage are alpha and beta hydroxy acids, such as glycolic, lactic, citric, mandelic, and salicylic acids; these ingredients not only smooth the skin's surface for a more refined quality, but have also been proven to reverse the visible signs of sun damage. Vitamin A ingredients, such as tretinoin and retinaldehyde are also effective, although they can be irritating to the skin and cause erythema.

Other peptide ingredients like tyranostat can also serve to modulate pigment production for a more even skin tone and ingredients such as licorice, arbutin, bearberry, mulberry, and kojic acid are effective natural skin lightening agents that are safe for the entire body. 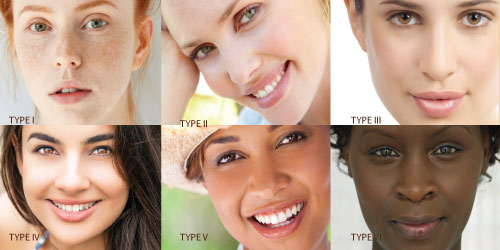 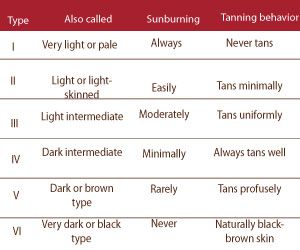 The products that are applied to the skin on a daily basis can make a big difference in the quality of the skin and in repairing the sun damage of times past. In order to make a great improvement in repairing the effect sun damage has played on the skin, incorporate a series of professionally administered treatments, including chemical resurfacing treatments, IPL, fractionated erbium, and CO2 laser therapies, which collectively work to reduce the sun damage and restore the skin to a healthier complexion.

PREVENTION AND PROTECTION
Ingredients and garments to protect the skin, such as pants, SPF, and hats, should be utilized when spending time outside. Nothing that can be applied topically or performed at a skin care professional treatment facility can outweigh the benefits that can only be achieved through the prevention of sun damage. To guard against the damaging effects of overexposure to ultraviolet rays, protect the skin by taking a few moments to prepare before going outdoors. Pack lightweight clothing to wear during the peak sunlight hours of the day and slather on a broad spectrum physical sunscreen that contains either one or both of the accepted natural sun-shielding ingredients, such as zinc oxide and titanium dioxide. Enjoy the protective benefits of antioxidants such as topical vitamin C; for a double dose of protection, eat nuts, berries, and dark green, leafy vegetables. If golden skin is desired, rather than chasing the sun or spending time in tanning salons, opt for self-tanners that are free of dihydroxyacetone – which is under suspicion of altering DNA, damaging mucous membranes, and even causing cancer – to achieve a bronze look.

While the adequate amount of sun is still debatable, enjoying modest amounts of sunshine also provides wellness-enhancing benefits that regulate circadian rhythm and improve sleep and the body's immune system. With recurrent damage caused by sunburns, the body is at increased risk for developing skin cancer.

Because of the vast natural shades of skin color and the body's genetic predisposition to tanning, there may not be any singular right answer for the appropriate amount of sunshine or protection for all people. By following the Fitzpatrick scale and identifying their skin type, people can easily select the amount of solar protection that is right for them and prevent damage before it begins. If skin damage has already occurred, there are aesthetic and medical interventions that can be utilized to restore the skin to a more healthy, vibrant, youthful-looking complexion. 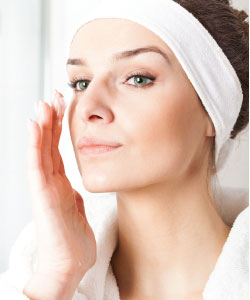