The Biology of Photodamage 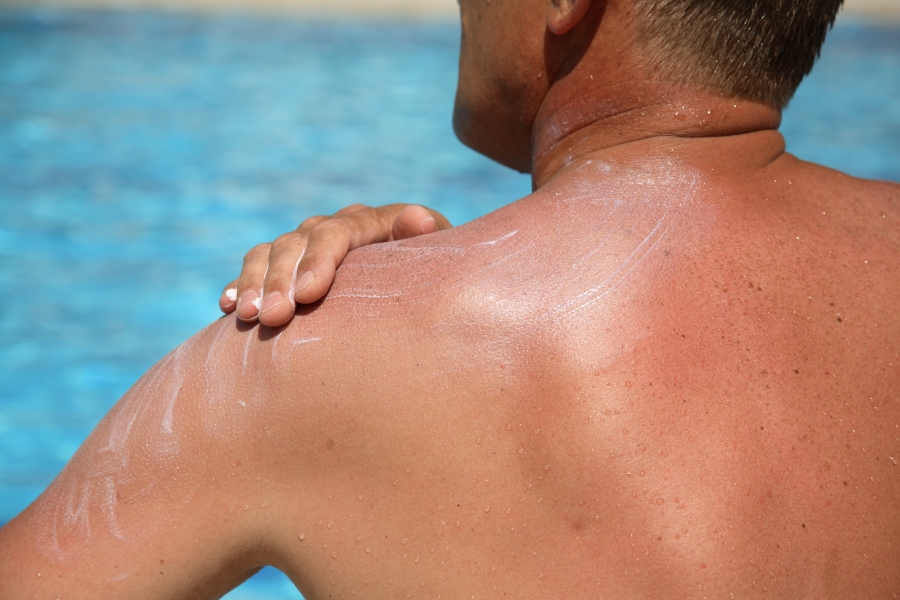 The human organism is constantly exposed to environmental assaults and the most important protective functions are provided by the skin. Chief among the diverse environmental agents, the skin must protect against is the ultraviolet radiation emitted from the sun. Photodamage, the general term referring to the toxicity associated with the cumulative effects of overexposure to UV radiation, is a broad and multifaceted issue. Beginning with biochemical changes and ultimately showing up as clinically visible manifestations from sunburn to photoaging to cancer, comprehension of the mechanisms and the associated preventive and protective measure that can be taken to mitigate photodamage must be an important part of a modern aesthetician’s overall understanding of skin health.

Sunburn is an ultimate consequence of overexposure to solar ultraviolet radiation. The epidermis, the upper part of the skin that is continuously regenerated, demonstrates a biphasic response. First, there is an immediate redness and irritation reaction followed by a secondary, delayed erythema, increases in epidermal thickness, immune activation, and perhaps even skin blistering.

The hallmark feature of UV radiation induced erythema (sunburn) is alteration in vascularity. This is associated with heat from the increases in blood flow and swelling secondary to activation of the immune system. Manifestation of pain and itching are related to secretion of peptide mediators that is also associated with immune activation. Some of the factors that will determine the degree of erythema that will be demonstrated include skin type, pigmentation, UV wavelength and the nutritional status of the skin.

For a sunburn response to manifest, UV radiation must first penetrate through the stratum corneum and secondly must be absorbed by specific biomolecules known as chromophores, which are endogenous target substances that include amino acids, melanin, and DNA. UVB radiation is associated with penetration into the epidermis, and it is thought that its target chromophores are DNA. UVA, which is less erythremagenic than UVB, penetrates into the dermis while its target chromophore remains unknown.

Some factors which affect the extent of erythema include season, time of day, time of exposure, altitude, and skin thickness. Skin color may also play a role in the development of sunburn. Both inherent, genetic pigmentation, as well as sun induced pigmentation can provide protection from erythema. The subtle and synergistic properties of the different chemical mediators found in the various skin cell types can also have a dramatic effect on the skin. Histamine, prostaglandins, leukotrienes, and adhesion molecules secreted from keratinocytes, mast cells, melanocytes, and endothelial cells after ultraviolet exposure can result in various degrees of sun induced erythema.

Most of the effects of sunburn are manifested by reactions on UVB on the skin. Maximum symptomology is demonstrated between 12 to 24 hours and gradually diminishes over 72 hours. The epidermis is most affected and this especially demonstrates as damaged keratinocytes. There are also associated changes in inflammatory mediators, cytokines, and adhesion molecules. UVB exposure also results in a thickening of the epidermis, which affords protection from further radiation assaults.

UVA, while exhibiting less potent effects on the skin, can cause erythema as well. Redness is present after initial exposure, diminishes after four hours, and rises to maximal levels between six and 24 hours after exposure. Unlike UVB, damage to keratinocytes can be minimal. Some studies have shown an increase in white blood cells in the dermis as well as endothelial cell enlargement. Repeated exposure to UVA daily for five days a week for six weeks in one study showed an epidermal and stratum corneum thickening as well as depletion of Langerhans cells.

Perhaps the most noticeable effects of UV radiation is the increase in epidermal pigmentation. This occurs in a biphasic fashion with an immediate effect that is maximal within minutes after exposure and then gradually fades. This is followed by a delayed effect that is noticeable after around 72 hours. Delayed tanning offers photoprotection, although for maximum protective effects stratum corneum thickening may be required. This is especially true in individuals of lighter complexion with lower melanin content. Exposure to both UVA and UVB may also stimulate the production of ceramides, which may be indicative of improvement in skin barrier function.

While erythema is the most prominent immediate result of overexposure to ultraviolet radiation, more moderate suberythrogenic exposure can also elicit skin effects which include melanogenesis and upregulation of vitamin D synthesis. However, perhaps the most significant of the effects of UV exposure on skin cell components are the ones on DNA.

UVB radiation can be directly absorbed by DNA. This can lead to the formation of photolesions that can modify the expression of genes and their associated proteins. UVA radiation penetrates into the lower levels of the skin and its toxic effects are mostly mediated by activation of photosensitizers and the creation of oxidative byproducts like reactive oxygen species (ROS). Most DNA photolesions are repaired by an endogenous, scissor-like enzyme complex known as the nucleotide excision repair (NER) system. Patients with inherent deficiencies in NER enzymes show increased sensitivity to sunlight and are more likely to manifest signs of skin cancer at an early age. In addition, keratinocytes have secondary systems in place to provide additional protection from UV radiation induced DNA damage, including arresting cell division (“cell cycle arrest”), DNA repair, inflammatory system activation, and finally cell sucide, known as apoptosis, which leads to the formation of the so called sunburn cell (SBC). SBCs are the keratinocyte’s final control point for preventing the formation of a cancer prone phenotype. Formation of SBCs is associated with a combination of factors including DNA damage, oxidative byproducts, and ROS, as well as signaling from cell membrane “death receptors.” Death receptor activity can be induced either from DNA signaling or directly via UV induced upregulation. In any case, evidence suggests that deregulation of the apoptotic mechanism by chronic ultraviolet assault may result in the development of skin carcinogenesis.

When UV photons attack intracellular chromophores, they induce an elevated energetic, unstable state known as “excitement” that can then be transferred to neighboring biochemicals such as proteins and the DNA structure itself. If molecular oxygen is affected, this can result in the formation of ROS. Healthy skin contains a wide spectrum of antioxidant defenses including enzymes such as catalase and glutathione and vitamins such as ascorbic acid and alpha-tocopherol. However, under conditions of nutritional deficiency and/or chronic UV insult, these systems may become overwhelmed resulting in oxidative photodamage to biomolecules and the activation inflammatory signaling cascades. Recent literature indicates that these factors may ultimately result in the activation of cancer initiators such as MAPKs (mitogen activating protein kinases).

A second mechanism whereby DNA becomes damaged is in a reaction between DNA and protein or within DNA itself called cross-linking, which results in an alteration of the DNA structure. This may have a profound effect on cellular activities, which can manifest as erythema and photosensitization. DNA cross-linking has also been associated with skin cancers.

While oncogenesis is obviously the most worrisome result of overexposure to UV radiation, it is not the only effect with implications for skin health. Over time, multiple UV exposures can also lead to complex and diverse tissue changes collectively referred to as photodamage. In a fashion similar to the development of genetic changes, a primary starting point associated with photodamage is UV initiated chromophore excitement. As chromophores are excited, they undergo structural modification and then transfer their elevated energetic state to other molecules. This can ultimately lead to the production of biomolecules that can upset the delicate and tightly held balance of cellular activities. These newly created chemicals can cause changes in enzymatic processes, repair systems, gene expression, or metabolic activity. All of these can result in changes that can visibly manifest as elastotic degeneration and dermal connective tissue alterations, which are clinically observed as wrinkles, fine lines, and leathery appearance and serve as the hallmark signs of photodamage.

As described above, human cells are well-equipped with repair systems to handle UV induced damage to DNA and production of oxidative species. As with the production of carcinogenesis in response to the overwhelm of these systems by chronic ultraviolet exposure, the involvement of unrepaired DNA photoproducts may be involved in photodamage as well. It must be noted, however, that the involvement of DNA damage to the signs of photodamage has yet to be directly linked. Thus, all inferences must be made indirectly. For example, it is known that ultraviolet exposure induces the production ofinflammatory cytokines, which likely involve DNA photoproducts. These inflammatory cytokines can then act on fibroblasts, altering their synthesis of glucoseaminoglycans, collagen, and elastin.

DNA and proteins are not the only substrates for phototoxic reaction. Lipids as well may exhibit signs of phototoxicity. Endogenous biomolecules within cell membranes may function as chromophores. These can then cause the production oxidation byproducts in membrane lipids in a manner similar to their reactions with proteins and DNA. Additionally, because protein and lipid components are so intimately combined in cell membranes, phototoxic reactions are likely to involve both components. Exposure of skin cells to UV radiation also results in a rapid release of inflammatory mediators from cell membranes.

Clearly then, phototoxicity covers a broad range of mechanisms and clinical manifestations. The question then becomes how to prevent or reduce the likelihood of sunburn or permanent damage that can result from overexposure to UV radiation.

As with most skin health issues, the primary defensive measure to protect against burning, photodamage, and photoaging is through internal application. This first and foremost involves diet and nutrition. Because many of the negative effects associated with solar exposure involve oxidation reactions, antioxidants should form the major part of the strategy against phototoxicity. Foods containing high amounts of vitamins A, C, E, and selenium should be included in the diet as well as generous daily servings of phytonutrient rich, colored vegetables. Protein and amino acid intake must be adequate, as rebuilding structural proteins after overexposure to UV radiation may be a consideration. Whey protein, which contains high amounts of glutamine and glutathione and supplemental NAC can help support biological free radical scavenging systems. Adequate intake of Omega-3 fats from fish and flax may help reduce sunburn response, and these powerful essential fatty acids have been shown to improve photocarcinogenesis in mice.

Topically, antioxidants applied directly to the skin may be helpful. Vitamins C and E, Alpha Lipoic Acid, and Ferulic Acid, when applied directly to the skin, have been shown to have photoprotective properties and topical vitamins A and C may help improve the appearance of photodamaged skin. Retinoic acid, the most potent form of vitamin A, has been recommended to replenish the skin’s inherent supply after UV induced depletion. Sunscreens, which block UVA or UVB, and broad-spectrum sunscreens, which block UVA and UVB rays, have well known sun protection properties and should always be used to prevent phototoxicity.

Exposures to environmental insult is a normal function of terrestrial life. These must be addressed for the human organism to survive. Consequently, human beings have evolved many defense mechanisms, the most prominent which is the skin. And, of all the environmental assaults humans are confronted with, UV radiation from sun is perhaps the most potent and problematic. Sunburn, photodamage, and phototoxicity, the end result of overexposure to solar radiation, is thus a significant health condition and one that must be understood and addressed if the modern esthetician is to function as a fully fledged health care professional.

Benjamin Fuchs, R.Ph., is a registered pharmacist, cosmetic chemist, and formulator for Sanítas Skincare. Fuchs has been formulating custom skin care products for over 20 years.