Coral Produces Sunscreen Compounds with Potential for Human Use 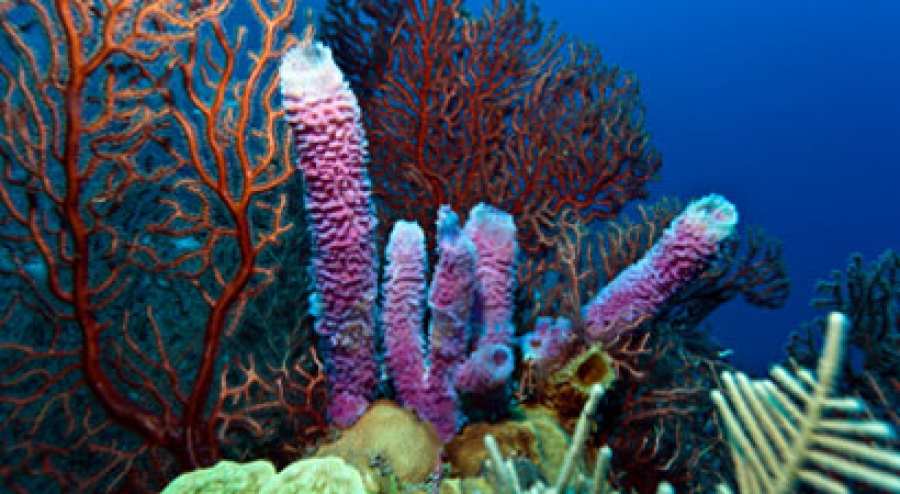 Natural sunscreen compounds produced by coral to protect from UV rays could eventually be used for making human sunscreens, researchers from King's College London revealed. The scientists, who discovered the new natural sunscreen compounds, are uncovering the biochemical and genetic processes behind their production. They believe they will eventually be able to recreate them synthetically, leading to new types of sunscreens for human usage.

The scientists gathered corals from the Great Barrier Reef, together with Professor Malcolm Shick from the University of Maine, USA, and Dr. Walter Dunlap from the Australian Institute for Marine Science.
Coral and algae - coral is an animal and algae are plants. They both have a symbiotic partnership. The algae live inside the coral and through photosynthesis make food for the coral. The algae use the coral's waste products for photosynthesis.
Corals need to be in shallow water because photosynthesis requires plenty of sunlight - there would not be enough sunlight deep down in the sea. However, this means corals are exposed to sunlight and are vulnerable to sunburn.
Project leader, Dr. Paul Long, said: "We already knew that coral and some algae can protect themselves from the harsh UV rays in tropical climates by producing their own sunscreens but, until now, we didn't know how. What we have found is that the algae living within the coral makes a compound that we think is transported to the coral, which then modifies it into a sunscreen for the benefit of both the coral and the algae.
Not only does this protect them both from UV damage, but we have seen that fish that feed on the coral also benefit from this sunscreen protection, so it is clearly passed up the food chain. This led us to believe that if we can determine how this compound is created and passed on, we could biosynthetically develop it in the laboratory to create a sunscreen for human use, perhaps in the form of a tablet, which would work in a similar way.
We are very close to being able to reproduce this compound in the lab, and if all goes well we would expect to test it within the next two years."
The scientists are also interested in eventually finding out whether these compounds could be used to protect crops in the developing nations from UV light - effectively, producing UV-tolerant crops. The majority of tropical countries are developing nations. UV-light is more intense in the tropics.
Dr. Long said: "The part algae play in protecting itself and coral against UV is thought to be a biochemical pathway called the shikimate pathway, found only in microbes and plants. If we could take the part of the pathway that the coral generates, and put this into plants, we could potentially also utilize their shikimate pathway to make these natural sunscreens.
If we do this in crop plants that have been bred in temperate climates for high yield, but that at present would not grow in the tropics because of high exposure to sunlight, this could be a way of providing a sustainable nutrient-rich food source, particularly in need for Third World economies."
The team are also looking out for "coral bleaching", a sign of higher sea temperatures, possibly caused by climate change. Coral bleaching can lead to the death of corals.
Coral bleaching can happen when the sea temperature rises two to three degrees more (average) than it should during the summer - when this occurs, algae is lost from the coral tissues. If this algae cannot be replenished the coral can die. 16% of the world's coral reefs were affected in this way in 1998 when sea temperatures rose abnormally in many parts of the world.
The scientists are trying to identify which biochemical and genetic changes occur when coral is exposed to light in an environment of higher sea temperatures. They believe their findings will help find ways of managing and conserving reef biodiversity in a global warming environment.