The Importance of Early Detection of Melanoma 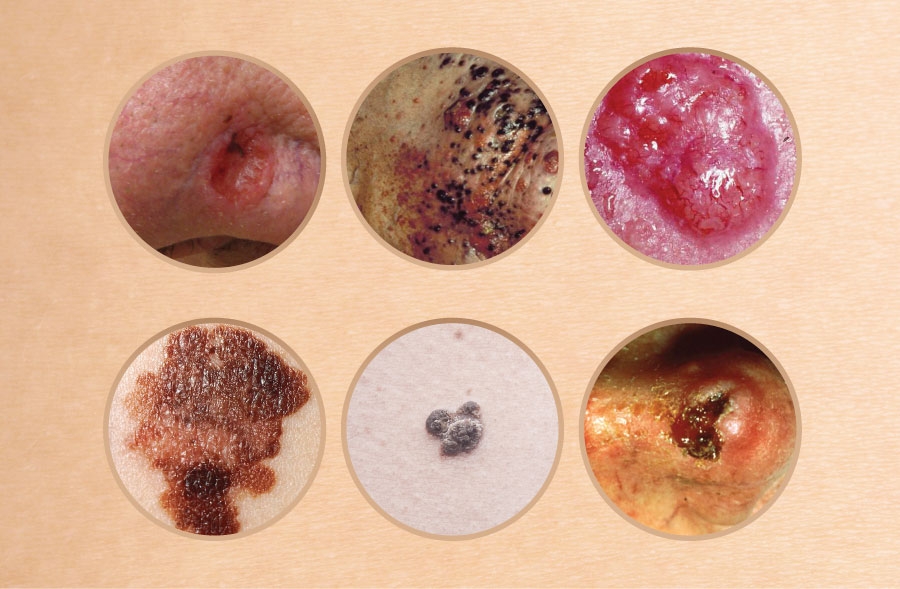 The incidence of skin cancer, which is the most common type of cancer diagnosed in the U.S., is rapidly on the rise. As a practicing dermatologist, I find myself detecting these cancers in younger and younger patients who are visiting the office for reasons other than a full body skin check. Three main types of skin cancer are routinely diagnosed and can be subdivided into melanoma and non-melanoma skin cancer. Non-melanoma skin cancers consist of basal cell carcinoma and squamous cell carcinoma, which are both slow growing and easily treatable when detected early. Ultraviolet exposure is largely responsible for these cancers; however genetics do play a role.

Melanoma is the much more dangerous, aggressive and rapidly growing cancer. Although highly treatable in its early stages, melanoma can be fatal if not detected early. Approximately 70,000 Americans are newly diagnosed with melanoma each year and one American dies of this cancer every hour. The incidence has tripled in the last three decades … making this an urgent public health concern.

What is Melanoma?
Melanoma is a cancer of the pigment producing cells, which are found on the skin, in the eyes, the neural system, as well as in the mucous membranes. It is highly treatable in its early stages; however due to its aggressive nature, it quickly becomes a dangerous adversary. While melanoma represents a minority of newly diagnosed skin cancers, 80 percent of skin cancer deaths are due to melanoma. Stage IV metastatic melanoma has a median survival of less than one year. Most importantly, it is crucial to know that anyone can get melanoma. While individuals with fair skin, light hair and eye color are at a higher risk, likely due to genetic predisposition such as the MCR1 gene, many darker skin type patients develop this deadly cancer as well. Other risk factors include a history of blistering sunburns, an abundance of nevi (spots or moles), large or atypical appearing nevi, a history of indoor tanning, a family history of melanoma, a personal history of melanoma or other skin cancer, as well as a weakened immune system. Both environment and genetics appear to play a role in causing melanoma, although many individuals develop this disease without a family history. Melanoma has proven to be an increasingly complex immunogenic cancer that is the result of an intricate relationship among genetic susceptibility genes, immunogenic pathways, and environmental exposure. To date, only a few hereditary melanoma risk genes have been identified. However, a recent study has identified a new mutation in a gene called MITF, which has proven to be a melanoma risk factor identified in families with multiple cases of melanoma. Regarding non-inherited genetic factors, another study has shown five newly identified risk genes, all of which do not appear to manifest their effect via phenotypic traits such as moles or pigmentation in contrast to prior predisposition genes.
Melanoma has a seemingly heterogeneous phenotype, appearing either pigmented (brown, black, blue) or nonpigmented (pink, red, white). The most common signs of melanoma are a growing nevus (mole), which has changed in size, shape or color. In the early stages, melanoma may be asymptomatic, however later it may be pruritic (itchy), bleeding or painful. It may present as a streak underneath a nail, or a bruise that will not heal. It is essential to see a dermatologist if an individual notes a new or changing lesion that does not resolve after two weeks.
Clinically, individuals may use the ABCDEs to assess if a mole is at higher risk to be melanoma.

Asymmetry of a particular lesion is highly suspicious, as is an atypical or poorly defined border. Multiple colors within a single lesion increase diagnostic suspicion, as does a diameter of six or more millimeters, although many melanomas are certainly smaller. Evolution of an existing lesion or a lesion that phenotypically stands apart from the rest is highly suspicious. Regarding diagnosis, The Melanoma Research Alliance (MRA) has provided funding and support for what is known as the INFORMED Program, which is aimed at educating medical professionals in the newest diagnostic methods to better identify melanoma via epiluminescence and other novel modalities.
Regardless, it is essential to see a dermatologist at least yearly for a total body skin examination, which includes the scalp, palms, soles, fingernails, toenails and the genital/anal area. A dentist should check the oral cavity; an ophthalmologist should check the ocular tissue; and for women, a gynecologist should evaluate the vaginal and anal area. Having a personal history of melanoma increases one's risk five-fold of developing another melanoma. Therefore skin examinations should be more frequent for people who have this type of history. Additionally, individuals should get into the habit of checking their own bodies on a monthly basis, increasing the opportunity of detecting anything new or changing. Spouses or friends can help check the hard to observe areas. Handheld mirrors and combs for the scalp can be helpful as well. Many skin cancers have been found by patients themselves. One study showed that self-skin exam performers are diagnosed with thinner melanomas than nonperformers (0.77mm vs. 0.95mm). Self-skin exams leading to earlier detection of thinner melanomas have been proven to decrease mortality by almost 63 percent. Furthermore, studies have shown that physicians can detect melanomas at a much earlier stage (thinner melanomas) than nonphysicians. One study identified that physician detected melanomas were on average 0.23mm versus 0.9mm in those detected by nonphysicians, leading to significant survival implications. Research has also proven that through physician total body skin examinations combined with self-skin examinations, melanomas are found earlier; meaning the depth is thinner leading to a much better prognosis. Melanomas that are not detected tend to grow and metastasize, leading to a much poorer prognosis. Early detection through physician-patient teamwork saves lives.

Tips for Skin Cancer Prevention and Sun Safety
While melanoma is an increasingly complex cancer due to multiple genetic and environmental factors, the most preventable risk factor is indoor tanning. Indoor tanning increases one's risk of melanoma by 75 percent. In addition to avoiding the sun during the hours of 10 a.m. to 4 p.m., wearing a broadband sunscreen of at least SPF 30 daily is critical. Sunscreen should be applied 20 minutes prior to outdoor exposure and then reapplied every two hours when exposed to the sun and more frequently if exposed to water or perspiration. The FDA currently permits use of the term water-resistant (rather than waterproof) on sunscreen bottles. However, the resistance may only last 40 to 80 minutes and some products can easily be rubbed off with a towel. Creams and lotions are preferable, as it is difficult to gauge adequate skin coverage with sprays.
Research is the key in revolutionizing detection, prevention and treatment of melanoma. The Melanoma Research Alliance (MRA) focuses its funding on prevention, detection and treatment, with a large emphasis on finding a cure. Prevention not only includes public outreach and education, but also the funding of research investigating the biologic mechanisms of carcinogenesis. Diagnostic funding provides support for researchers identifying new biomarkers of melanoma which could allow for more accurate detection aside from standard pathology and could simultaneously lead to more targeted therapeutic approaches. Additional research is needed to improve the tools available to detect and diagnose this cancer early and with even greater precision. Furthermore, identifying new susceptibility genes would allow more focused outreach to high-risk individuals.
While prevention and detection of melanoma are of crucial importance, novel treatment approaches are essential toward curing this disease. The year 2011 was a remarkable one for melanoma research as two drugs were approved by the FDA. In March 2011, Yervoy (ipilimumab/anti-CTLA-4) was the first drug in 13 years to be approved for metastatic melanoma. It is an immunotherapy agent which can help an individual's body mount an immune response to attack tumor cells. This was closely followed by the approval of Zelboraf (vemurafenib) in August 2011. Vemurafenib is a molecular targeted therapy aimed at melanomas, which exhibit a BRAF mutation that is found in approximately half of all melanomas. New therapeutic approaches include both immunotherapies as well as molecular targeted therapies.
Melanoma has proven to be a highly immunogenic cancer, which may induce specific anti-tumor immune responses. Therefore, researchers are investigating how best to utilize the immune response in order to eradicate the cancer via immune checkpoint inhibitors, such as the PD-1 blocking drug as well as monoclonal antibodies (ipilimumab) and adoptive T–cell transfer protocols. Anti-PD-1 is an immune checkpoint inhibitor that underwent Phase 1 trials, resulting in a positive outcome in melanoma, renal cancers, as well as non-small cell lung cancer. Furthermore, it has been shown that tumor samples consisting of an elevated PD-L1 (ligand protein to PD1) had a better response to the drug. Scientists are attempting to better identify immunogenic signatures that have been associated with prior successful treatments.
Molecular targeted therapies are those that block the growth and spread of tumor cells by specifically manipulating the associated biochemical pathways. There has been much research targeting the BRAF mutant melanomas. BRAF is a mutation found in half of all melanomas. Vemurafenib is a BRAF inhibitor that has been shown to result in rapid, yet usually transient tumor regressions in 70 to 80 percent of cases. Researchers have commented that this transient regression may be due to the fact that not only one altered molecular pathway is at play, yet multiple pathways which allow the tumor cells to develop resistance to single agent treatment. This has subsequently led scientists to hypothesize that combination treatment modalities may be the answer to halting tumor progression. By approaching the cancer cells via multiple mechanisms with both approved and investigational treatments, the body has a better chance of fighting the disease with durable results. Furthermore, it is believed that due to the genetic instability of cancer cells, treatment is essentially being aimed at a moving target as the cells are developing survival strategies. The ultimate goal of combination treatments is greater tumor destruction and prevention of drug resistance. There are many combination treatments currently being studied. Furthermore, as the genotypic studies of different melanomas become more available, more targeted therapies and combinations may be specifically selected for each patient.

Marnie B. Nussbaum, M.D. F.A.A.D., is the clinical dermatology advisor for the Melanoma Research Alliance. She currently is in private practice on the upper east side of New York and is also a clinical instructor of dermatology at Weill Cornell Medical Center. Nussbaum completed her internship training in Internal Medicine at Memorial Sloan Kettering Cancer Center, and her residency in Dermatology at Weill Cornell-New York Presbyterian Hospital, where she served as chief resident in dermatology. Among her numerous awards are the Outstanding House Staff Award, and the Women in Science Award. Nussbaum is a member of the American Academy of Dermatology, the American Society of Dermatologic Surgery and the Women's Dermatologic Society. A native New Yorker, she graduated with honors and distinction from Cornell University and attended Weill Cornell Medical College in Manhattan, where she was the recipient of the James Metcalf Polk Award for achieving highest academic honors in her graduating class. Nussbaum also served as president of Alpha Omega Alpha, the national medical honor society.