A Red Miracle for Skin Health 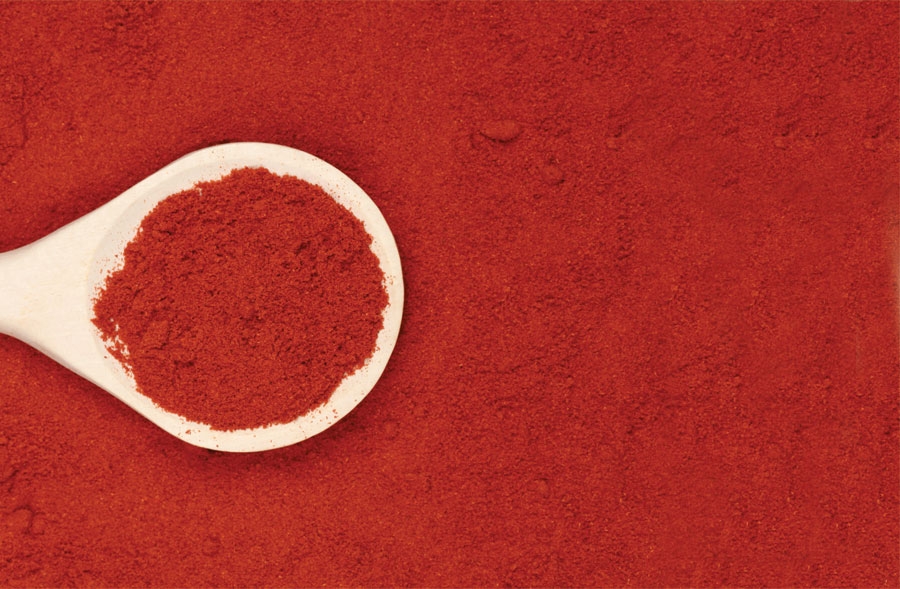 Scientists long ago discovered a class of naturally occurring organic pigments called carotenoids that are crucial for human health. Alpha-, beta- and gamma-carotene are the most popular carotenoids which are converted to vitamin A in the human body. Recently one of the carotenoids called astaxanthin has brought increased attention as a "super nutrient" for human body and skin health.
Astaxanthin is a dark red powder which is insoluble in water but soluble in fat and some organic solvents. This carotenoid is found in microalgae, yeast, salmon, trout, krill, shrimp, crayfish, crustaceans and some wild berries.

The astaxanthin molecule is similar to beta-carotene but cannot be converted to vitamin A (retinol) in the human body and is not an essential vitamin. There is no deficiency of astaxanthn. It is safe for intake and there is no toxicity or adverse symptom found with high intake dosage.
The clinical studies have revealed that the intake of astaxanthin has a number of health benefits such as increasing strength and endurance, fighting against diabetes complication, protecting eyes from cataracts and glaucoma, reducing risk of cardiovascular disease, preventing cancers, and assisting in neurodegenerative conditions such as age-related macular degeneration (AMD), Alzheimer's and Parkinson's. Furthermore, scientific studies have disclosed that astaxanthin is beneficial for skin health in several aspects.

Astaxanthin Is the Most Powerful Antioxidant

The astaxanthin molecular structure is shown in Figure_1. There is a long, double-bonded polyene chain with two six-membered ring end groups in astaxanthin. In chemistry, a carbon double bond (C=C) is easy to break and release an electron for antioxidation. Vitamin C has one C=C and vitamin E has three C=C. Astaxanthin has nine C=C in a long aliphatic hydrocarbon chain (polyene) with two additional C=C in two end rings. This unique molecular structure gives it superior antioxidant capacity. Different from regular antioxidants, astaxanthin entraps free radicals by incorporating them to its long polyene chain rather than donating electrons. This is a more effective mechanism than electron donation. 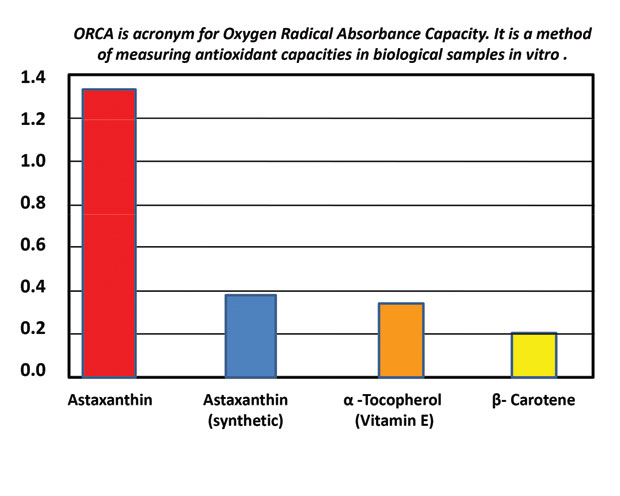 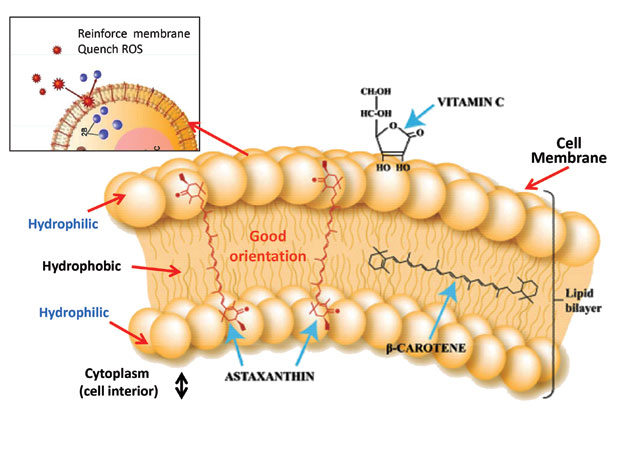 The lipid soluble (lipophilic) nature of astaxanthin allows it to efficiently penetrate into the cell membrane. Furthermore, the keto (C=O) and hydroxyl group (OH) attached to the ring makes the two end groups hydrophilic (water loving) so that astaxanthin is specifically oriented into a hydrophilic and hydrophobic position in the cell membrane as shown in Figure 3. This unique orientation allows astaxanthin to quench reactive oxygen species (ROS - singlet oxygen, superoxides, hydroxyl radicals) more effectively against lipid peroxidation. In addition, the bridge like structure Increases rigidity and mechanical strength of the cell membrane and acts as an excellent stabilizer. Astaxanthin's cell protection ability compared to other antioxidants is shown in Figure 4. 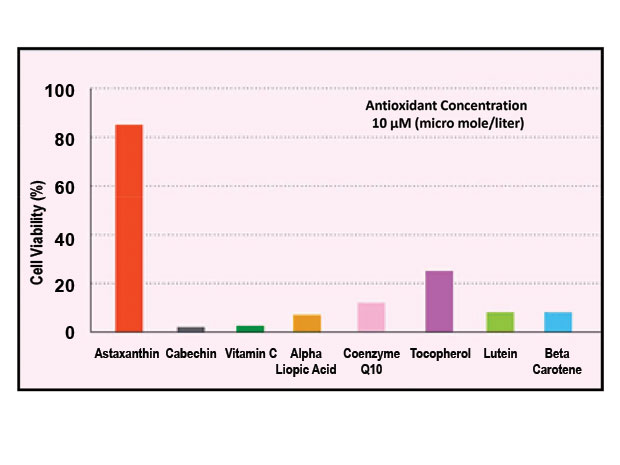 Obviously, astaxanthin provides superior protection for the cell membrane and the mitochondria membrane within the cell as well.

Astaxanthin is Natural or Internal Sunscreen
Similar to vitamin C, astaxanthin does not shield or adsorb UV light but has good photo-protective benefit. Experiments show that the skin gets considerably less damage if it is pre-treated with astaxanthin before sun exposure.4 Furthermore, the skin recovers quickly from sun damage after topical application of astaxanthin.
Fibroblasts are skin cells that act as a skin defense system, providing antioxidant enzymes such as superoxide dismutase (SOD) and catalase (CAT). When skin is exposed to sunlight, ROS formation and its build-up occurs. Astaxanthin can protect and enhance the ability of the fibroblasts to reduce the formation of ROS and also scavenge ROS after its formation.
Sunburn is the formation of erythema (redness and swelling) - an inflammatory process. Due to potent anti-inflammatory properties of astaxanthin, it can help protect the skin from developing sunburn or to sooth a sunburn after its formation.
Therefore, astaxanthin provides excellent sun protection within the skin as an internal sunscreen. It should be clearly understood that astaxanthin provides secondary or complementary sun protection instead of a substitute for traditional sunscreens. It will be greatly beneficial to use topical astaxanthin together with an external sunscreen for better sun protection. It is recommended to apply a concentrated vitamin C serum with astaxanthin onto the skin and then apply an adequate facial sun block for a dual and much more effective sun protection.

Astaxanthin Has Multiple Skin Benefits
Astaxanthin helps to stimulate continuous production of collagen in the skin which is responsible in maintaining skin tone elasticity and firmness. Astaxanthin can inhibit melanogenesis or reduce melanin production (about 40 percent) diminishing age spots, freckles, and dark eye circles gradually.5,6 Its effect is superior to vitamin C. Topical astaxanthin may act as an effective skin whitening agent, which is a tremendously popular trend in Asia.
There have been a number of studies about astaxanthin's skin benefits using oral supplement, topical application or the combination. These studies have shown a substantial improvement (between 35 to 59 percent) in wrinkle reduction, skin smoothness, skin moisturization and elasticity over a period of two to 12 weeks.7,8,9 Astaxanthin is definitely a new potential and promising skin anti-aging nutrient.
The human body does not produce astaxanthin and it must be obtained via food intake such as lobster, salmon, shrimp, et cetera. After ingestion, astaxanthin binds with lipoprotein for transport via body blood system. Compared with water soluble vitamin C, lipid-soluble astaxanthin has better body absorption and lower body deletion rate. However, astaxanthin's body absorption is limited and large dosages of astaxanthin may not increase it in the body significantly in comparison with typical daily intake of two to four milligrams. Presumably the amount of astaxanthin to reach skin by oral intake would be limited (shown in Figure 5). 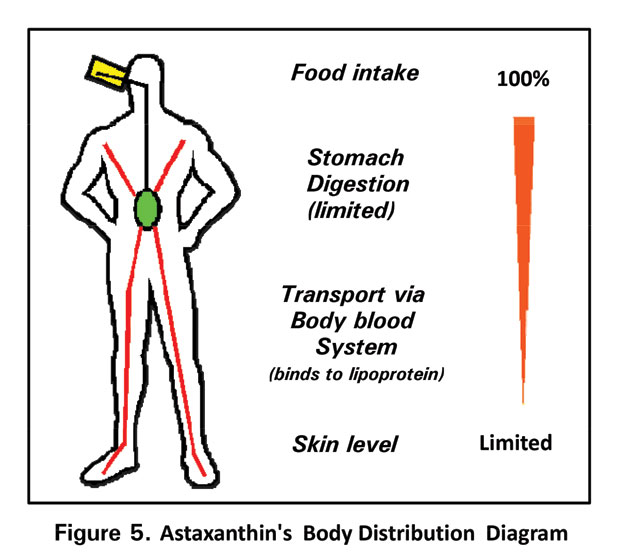 Wade Cheng is C.E.O. and director of research and development for Rejuvi Laboratory, Inc. Prior to this position, he was a senior research chemist on Smithkilne Beckman Corporation, California Public Heal department and Bio-Rad laboratories. He holds a B.S. degree in Chemistry and Chemical Engineering. He also holds a M.S. degree in Analytical chemistry from University of San Francisco and has a Ph.D. in biochemistry from University of California-Davis. He has over 100 publications in many scientific journals and magazines. 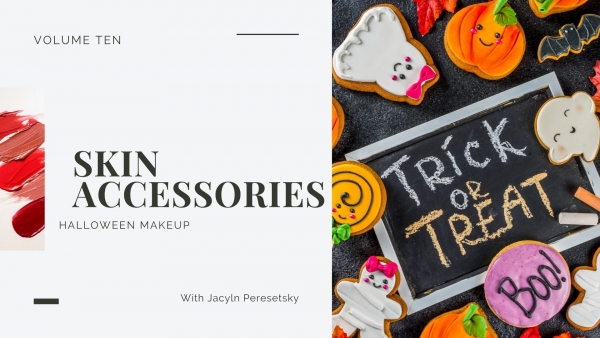 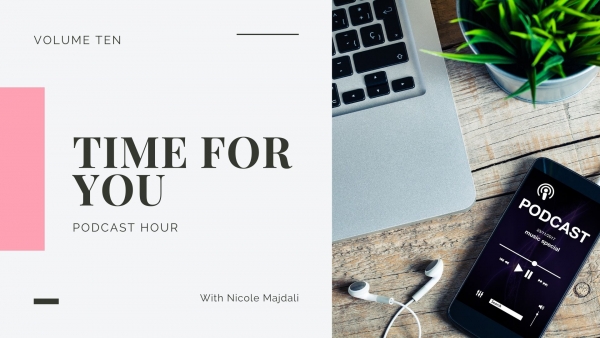