Drugs and Their Effects on the Skin 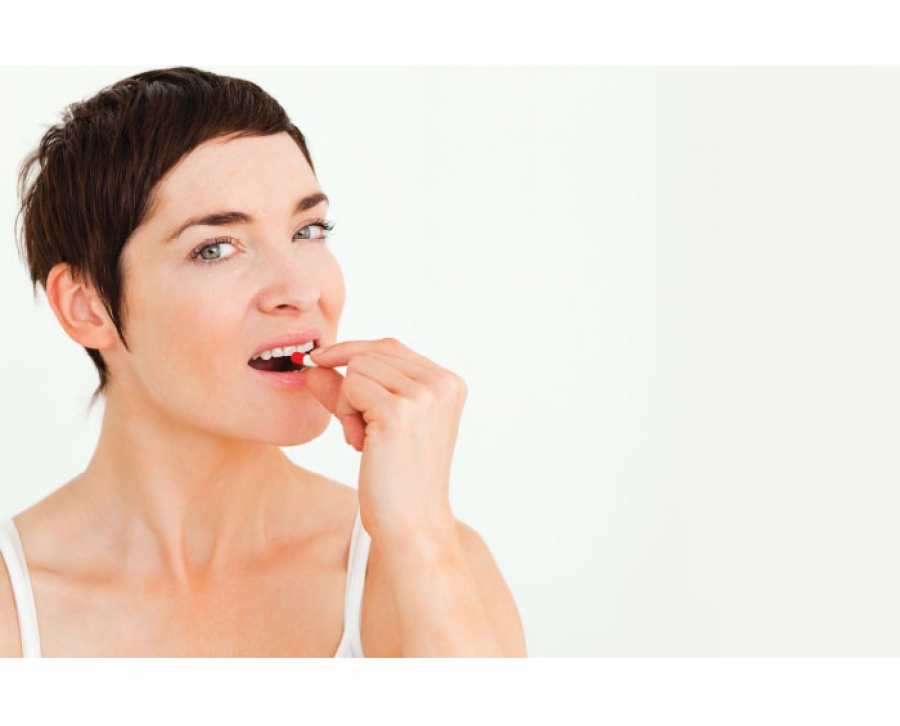 A study published by the Journal of the American Medical Association concluded that the prevalence of prescription drug use in America among people 20 years of age and older had risen to 59 percent in 2012 from 51 percent just 12 years earlier. During the same period, the percentage of people taking five or more prescription drugs nearly doubled from eight to 15 percent.1 Another study cites the United States as consuming 75 percent of the world's prescription drugs.2

While these statistics warrant considerations in a broad sense, they align with other factors, including secondary systemic reactions or iatrogenesis as a result of consuming medications and the potential interactions regarding the skin. It is of particular importance to skin care professionals to observe safety precautions in both product application and procedural approach with regard to client medication use. As skin sensitivities and related syndromes are on the rise due to a myriad of influences, a primer in pharmacology is justified. The traditional aesthetic intake protocol and client form involves a generalization of health, current skin care product regimen, previous dermatology and skin care service history, surgeries, allergies, medications, and the informed consent. In observation of the increase of pharmacological interactions, the standard aesthetic intake form professionals are currently using may require a second look and several modifications for safety and compliance. 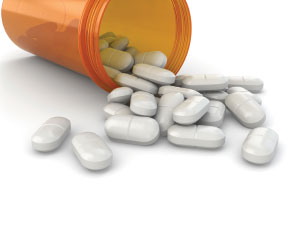 Considering the current prescription intake statistics, it is not unreasonable to estimate that one out of three clients may be consuming over the counter medications, herbs, supplements, or prescription medications.

The modern skin assessment and actual qualification of clients to receive services requires a much more in depth evaluation, conversation, and criteria. It is a valid dispute that many clients are reluctant to share important information for the purpose of insisting on a specific procedure being performed. The skin care professional must stress the rationale for the line of questioning, assuring that the questionnaire format is intended for the client's safety and well-being, and is required. Along with encouraging the client to become compliant in disclosing medications, the professional should also become more aware of the sciences surrounding medications. This information regards potential reactions that may result from even the most simple of procedures in some individuals, given their health status and medications. As each visit for the client may represent new or altered medications, a change in their health status may equate to possible interactions when performing a service. Bio-individuality, health status, and age play a large role in skin sensitivity; the potential reaction in combination with treatment may cause no reaction on one person, but might cause a volatile response on another client. Simply put, the consumption of medications and, more importantly, several medications, may create many unknown variables with any skin care product or service, including peels, enzymes, microdermabrasion, microcurrent, and LED.

PHARMACOLOGY
Pharmacology is the study of drugs and their reactions within the biological systems of the human body and is primarily concerned with the physiological effects on cells, tissues, and organisms. Pharmacology involves the study of prescription drugs and their origin, constituents, possible interactions, effects, and reactions. Pharmacology is a biomedical science that deals with the research, discovery, and characterization of chemicals that illustrate the activity of cellular organisms and their function in relation to pharmaceuticals. The term pharmacy is defined as a profession in the health field that is concerned with the application of science learned from pharmacology, however, it involves the dispensing of medications for direct patient care.3 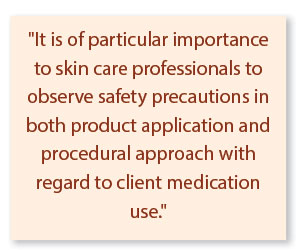 LIFE CYCLE OF A DRUG – PHARMACOKINETICS
In order for a drug to have a reaction within the body and produce a characteristic effect, it must provide the proper concentration for activity at the site of action. The absorption, distribution, metabolism, and excretion all involve the passage across cell membranes. The particular effect of the drug is based on the following:
Structure – The molecular, shape, size, and electrical charge of a drug determine how a drug will bind to a particular receptor site.

Amount – The drug dosage or administered amount.
Absorption – The rate and length period of absorption into the body.
Distribution – The rate and extent of distribution through membranes.
Metabolism – The process by which drugs are changed into different chemical compounds is referred to as metabolism and the new substances that are produced are called metabolites.
Excretion – How the drug is cleared through the body and the time period.

DRUG RECEPTOR INTERACTION
Drugs act on the cell membrane by physical and/or chemical interaction. This reaction occurs through specific drug receptor sites along the cell membrane that have been identified to react with the medication. Drugs may also act by physical means outside the cells, which includes external surfaces such as the intestinal tract, colon, or skin. This association or binding takes place by precise physiochemical interactions between specific groups of the drug and the receptor sites: proteins, intracellular sites, enzymes, and DNA.

PHARMACOLOGY AND THE SKIN
Much of the information about the pharmacology of the dermis is related to fibroblasts and one of its most important biosynthetic products: collagen. When drugs are administered, the modification of a drug affecting any biosynthesis of the integumentary system may lead to alteration in the function of the dermis. 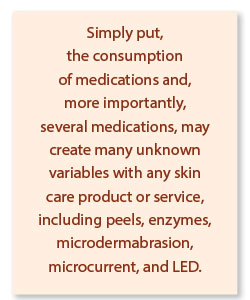 Drug molecules are distributed throughout the body via circulation and are distributed fairly quickly throughout the bloodstream. Since drugs circulate in the bloodstream and include transuding into the capillaries, the dispersion of drugs include multiple variables for reaching its target receptors. Drugs are exchanged between minute passageways connecting cell walls, capillaries, and the tissues around them.

The capillaries are not only the responsible structures that exchange blood, they are also conduits for bringing water and nutrients into close contact with surrounding cells. The solubility of the drug entering the bloodstream may be varied, even though it is in the bloodstream. The drug must cross various barriers to reach the site of action. Only a small proportion of the total amount of a drug is in contact with the specific cells that produce the pharmacologic effect. Some of the drug may be found in remote or barrier areas located away from the intended drug site of action; these remote areas can be fat, tissue, or even single or multiple cells. Single cell layer barriers would be the intestines and multiple cell layers would be the skin.

Circulation that is intently increased to the site of absorption or heat will enhance the absorption of a drug. In general, the consumption of medications change the skin's ability to absorb, may possibly decrease the healing ability of the skin, alters the skins' pH and flora, and, in the case of some medications, alters the skin's structure, such as Accutane. All of this is dependent on age, health status, type and dosage of medication, and the variables surrounding the absorption of the medication itself. The same medication and dosage will simply not react the same on each individual, hence there are reactions and potential interactions.

SIDE EFFECTS AND DRUG INTERACTIONS
Drugs are classified according to various criteria and by chemical structure and pharmacological activities. The activity or action of a drug on the body is the physiological mechanism by which the chemicals in the drug produce a response in the body. One primary problem with pharmacology is that no drug invariably produces a single effect. What is considered to be the primary effect is the intended and desired therapeutic effect. Secondary effects are effects that occur in addition to the desired effect and may or may not be harmful.

A side effect from a drug, which is also known as an adverse effect, may be caused by a single drug taken on its own and can be predicted and treated, often by reducing the dose, stopping or changing the medication, or taking a different medication. Side effects can range from a slight annoyance, such as dry skin, to very severe reactions that require hospitalization.

A drug interaction can be caused by two or more drugs, drugs taken in combination with alcohol, exposure to sunlight, supplements, herbs, and even some foods. A drug allergy is caused by the immune system reacting to the drug and can range from skin reactions and anaphylactic shock to death. When two to four drugs are taken, the potential for interaction is six percent, however, the risk for interaction increases with five drugs and rises to almost 100 percent with eight drugs.4 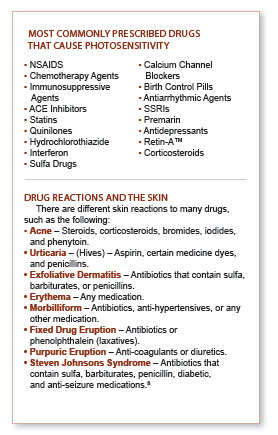 Drugs can produce effects that are stimulatory or inhibitory based on their ability to interact with the entire body. Drugs can also produce effects based on their acidity or alkalinity, surfactant properties, ability to denature proteins, osmotic properties, or physiochemical reactions with membrane lipids. In pharmacology, these include prescription drugs, over the counter drugs, vitamins, herbs, and alcohol. Others may include cigarettes, certain foods, sun exposure, and illegal drugs.

The skin will respond to medications via inflammatory and immune reactions. Many drug reactions are the result of hypersensitivity with an underlying immune mechanism. The term hypersensitivity is applied when the immune reaction to a drug results in an exaggerated response or heightened sensitivity. In what is referred to as the Type III reaction in pharmacology, intravascular immune complexes though phagocytes (phagocytosis), result in their depositing in the skin and microcirculation, creating immune-mediated sensitivity. Type IV pharmacology reactions are mediated by delayed hypersensitivity reactions that include contact dermatitis. It should be noted that the majority of photosensitive and phototoxic reactions that occur are due to sun exposure and medications. While professionals typically endorse LED therapy for the management of hyperpigmentation and other skin care considerations, evaluations must be given to the interaction of medications and any artificial light-based therapy, such as wavelengths within the UVA (320 to 400 nanometer) range; certain compounds within the visible range are more likely to cause drug-induced photosensitivity reactions, although UVB (290 to 320 nanometer) can also be responsible for such effects.5 In particular, COX 2 inhibitors, NSAIDS, and steroids have been found to potentiate skin reactions.6,7 It remains prudent to screen clients with photosensitive dermatoses or those taking photosensitizing medications as these are contraindications to treatment.8

Dr. Erin Madigan-Fleck brings over 30 years of experience to the aesthetic and natural health industry. She is a licensed master cosmetologist and esthetic instructor and holds certification as a dermatology technician. Madigan-Fleck received her Naturopathic Medical Doctoral Degree from the University of Science, Arts, & Technology College of Medicine. She is the co-founder of Intellective Aesthetics Post Graduate Aesthetic Training, the Southeast Director of the Association of Holistic Skin Care Practitioners, and has a private practice, Naturophoria, in Atlanta.