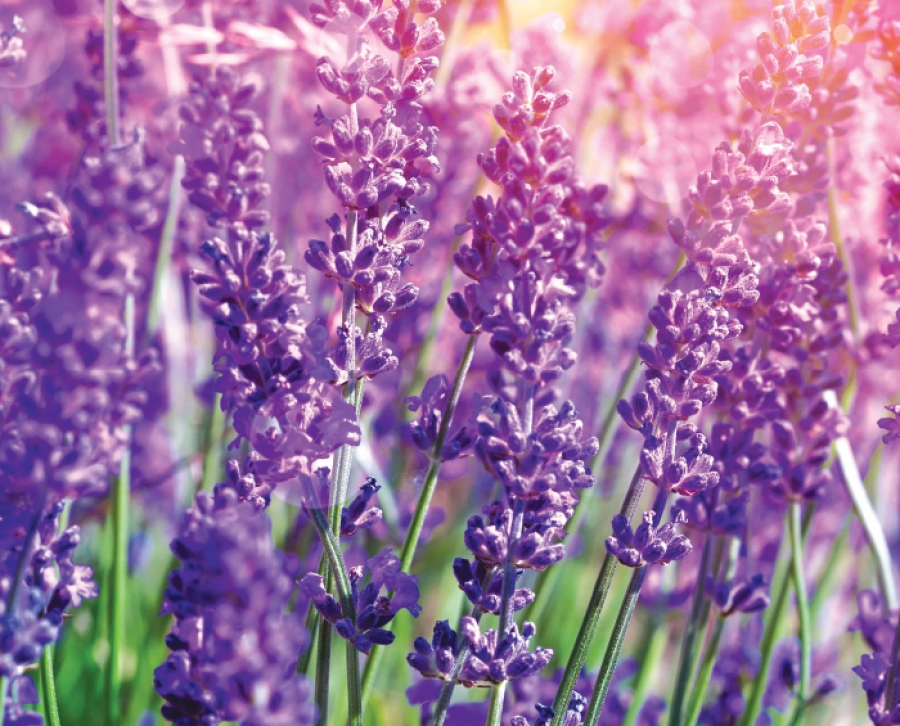 Lavender is a hardy, fragrant shrub that has narrow leaves and grey-blue flowers and can grow to a height of three feet. While the aroma of lavender can be found throughout the entire plant, essential oil can only be obtained from the flower. Originally grown in the mountains of Europe, in poor but well-drained soils, lavender is now grown worldwide. However, the primary aromatherapy producers are France, Bulgaria, Croatia, and Russia.

HISTORY
The word lavender often conjures wonderful images of purple colored fields in the south of France. Sometimes referred to as the Swiss army knife of herbs, lavender has been used throughout history. The Persians, Greeks, and Romans all used lavender to disinfect their sick rooms. The term lavender is derived from the Latin word ‘lavare,’ which means to wash. With its many cleansing capabilities, lavender was the Romans’ aromatic and medicinal choice for scenting their bathwater and making ointments to heal the body.
During the Great Plague, lavender was part of four thieves’ vinegar, a mixture that was said to be used with great success by grave robbers in order to avoid contracting the deadly disease. It also has a long history in the development of modern aromatherapy.
Maurice Gattefosse’s observation of the dramatic healing effect of lavender oil when he burned his hand in a laboratory accident led him to research essential oils in greater depth. Dr. Jean Valnet used lavender oil to treat serious burns and war injuries when he was a French army surgeon. The medicinal use of lavender, especially in essential oils, continues today with good reason.
There are many different varieties of lavender, some of which are considered more important because of their specific properties. The most common plants are spike lavender (Lavandula spica), French lavender (Lavandula stoechas), and true lavender or English lavender (Lavandula officinalis or Lavandula angustifolia). 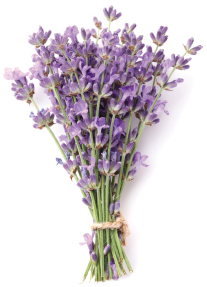 CHEMISTRY
To truly understand lavender, its chemistry needs to be explored, including linalyl acetate – an ester that is anti-inflammatory – and linalool, an alcohol that gives lavender its antiseptic properties. When buying lavender for clinical uses, true lavender 40/42 is required, with the numbers representing the required minimum percentage of these two particular pieces of chemistry. In comparison, Bulgarian lavender has a gentler aroma and has linalyl acetate and linalool in percentages of 38/40. It is important to know the country of origin of any of the essential oils being used in the spa because its location of growth, climate, harvesting techniques, and distillation temperature all determine its chemistry and, therefore, its properties.
For example, a dry and hot summer will create a higher percentage of esters than a damp summer would. Furthermore, Alpine lavender is always higher in esters than plants grown at lower altitudes. Alpine lavender also has a more camphorous smell, but it is more useful for treating respiratory conditions.
The chemistry of this oil is also unique in a different way. It not only has the ability to have its own action enhanced by other oils, but, in turn, it also heightens the action of the oils it is mixed with. In the process of custom blending oils for a client, lavender should be considered in most blends for its ability to bring a blend of oils together in their action and aromatic odor.

USING LAVENDER IN THE SPA
Of all the essential oils used in clinical aromatherapy, lavender is undoubtedly the most versatile, with a wide range of properties from analgesic to antiseptic.
It is an essential oil that should be in every first aid kit in every spa. As a sedative, lavender is very effective; when used as an inhalation at night, it will aid in sleep. A small amount of lavender oil can be massaged onto the throat to relieve a cough. The sedative action of the oil will calm the cough. Lavender will also relieve many forms of headaches if massaged onto the temples. For best results, combine it with peppermint and eucalyptus in a cold pressed oil and gently massage it onto the temples and the back of the neck.
Another popular use for lavender is in the relief of muscle and joint pain. Because it is considered an analgesic, it is best used in a massage treatment or in a bath and should be combined with other analgesic oils, such as rosemary, black pepper, clove, and peppermint. Muscle pain, menstrual pain, and arthritic pain can all benefit from the application of the oil, resulting in reduced inflammation and the calming of the central nervous system. As an antiseptic, it is also soothing and anti-inflammatory, thus making it very useful for many skin conditions. Its delicate aroma also lends itself to being blended in creams and lotions, usually in a dilution of one percent to two percent.
In the spa, lavender is very valuable in the treatment of acne. As an antiseptic and anti-inflammatory, it not only inhibits the bacteria causing the infection, but also calms the redness associated with acne. Furthermore, it can be blended with ylang ylang to help reduce sebaceous flow. Lavender can also help in many cases of eczema and blends well with chamomile and peppermint to calm the skin. When using lavender for its anti-inflammatory and soothing properties, be sure to use it in low dilutions of less than one percent.
One of the most important properties of lavender is its ability to restore unbalanced states, whether of mind or body, to a place in which healing can occur.
With summer just around the corner, consider lavender for its insecticidal properties. When combined with oils such as lemon, citronella, eucalyptus, and tea tree, it makes a great mosquito repellant, as well as a lotion for the treatment of insect bites. Lavender can also be used to alleviate sunburns and sunstrokes when prepared in a light lotion, cold compress, or cold gel.
It has been used for centuries to protect clothes and linens from moths. When combined with oils such as myrrh, lemongrass, and tea tree, lavender can be used as fungicidal for the treatment of athlete’s foot and other fungal infections. 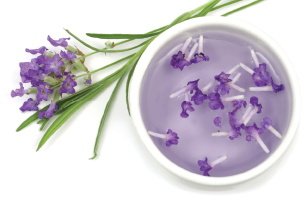 MIND AND SPIRIT
Lavender oil is useful for relieving stress. Stress that becomes counterproductive on a physiological level involves either the sympathetic or parasympathetic nervous system. Sympathetic hyperfunctioning is triggered more by physical stress while parasympathetic hyperfunctioning is caused more by emotional stress. Lavender oil will inhibit both the sympathetic and parasympathetic nervous system functions. By selectively inhibiting either sympathetic or parasympathetic nervous excess, lavender can assist responses to unproductive stress of any kind.
Salvatore Battaglia quotes Peter Holmes as suggesting the use of lavender in acute crisis situations dominated by sudden, unpredictable, and spontaneous features. Holmes also states that lavender can promote personal renewal in every way by washing away past habits and opening clients up to new possibilities.1 It helps by producing inner acceptance of a painful situation, easing fear, and creating the strength that allows people to move on.
Lavender has been the focus of many clinical trials and is being used in hospital wards as a massage oil, a vapor to help dispel anxiety, and an alternative to orthodox drugs to help patients sleep.
Gabriel Mojay equates lavender with Virgo, the astrological sign. He speaks of the characteristics of Virgo to include oversensitivity and inhibition, using lavender to “calm the nervous anxiety that results in shyness and embarrassment.”2

Lavender should be used wisely because, while a small amount is calming, too much can be stimulating. Always remember that as popular as lavender is, it is not everyone’s favorite aromatic oil, but if it is blended well with other oils, clients will greatly benefit from its amazing, medicinal properties.

Trish Green, director of sales and marketing for Eve Taylor North America, has been an educator for 40 years. She is an international speaker, educating aesthetician across the United States and Canada. As a CIDESCO aesthetician and a homeopath, she specializes in the wellness approach in her aesthetic practice, offering a unique approach to the treatment of clients in the spa.