Written by   by Annette Hanson, founder of Atelier Esthétique Institute, inducted into the AIA Academy of Legends in 2009 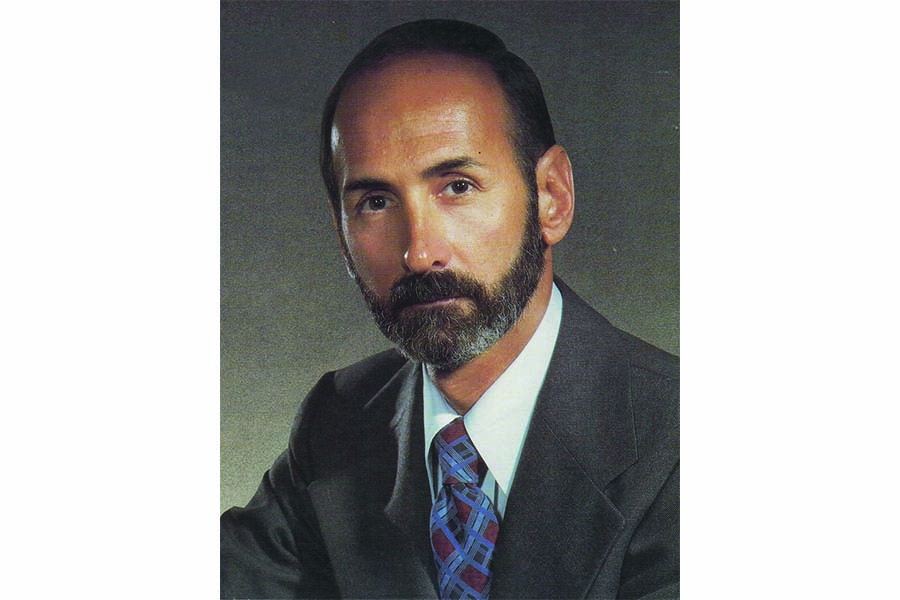 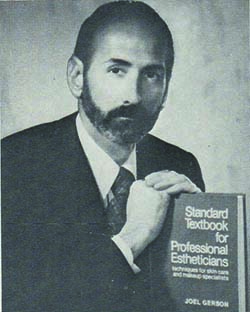 On January 31, 2018, we gathered together to celebrate the life of Joel Gerson – my friend, my colleague, and my neighbor. He passed away at age 83 after a wonderful life and groundbreaking career in aesthetics.

Joel Gerson was a prolific representative of the aesthetics industry. In addition to having been an inspiration to countless incoming students, he was an international ambassador of American aesthetics. His influence reached every corner of our industry. His charm and whit preceded him and his passing is a great loss to all who love the profession – and the man. - DERMASCOPE Magazine

Joel’s textbook, “Milady’s Standard Textbook for Professional Estheticians,” forever changed the field of aesthetics. He was among the first to put the industry’s practices down in text, which provided benchmarks to be followed. In doing so, Joel wrote so much more than a textbook – he created direction and standards that may have shaped the industry. Without his work, the field may not have become what it is today. 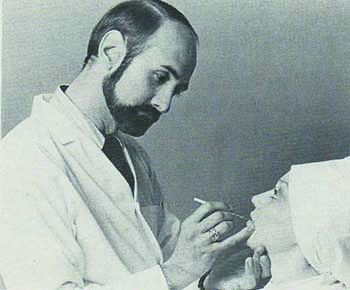 For me, Joel’s accomplishments cannot be separated from my memories of the man himself. He had a unique personality and strong sense of humor – one never knew what he was going to say. I remember when he introduced me as a speaker at a beauty congress. After explaining to the audience that I needed no introduction, he stopped in surprise and announced, “Wow, Annette! You’ve lost so much weight – tell us how you did it.”

Joel’s brother, Richard, organized the gathering that celebrated his life. Although Richard lived in California, he and Joel remained close their whole lives. Naturally, Richard hosted the celebration in Joel’s apartment building on 73rd and Madison in Manhattan. It was there that Joel happily spent his last days. He never missed one of the building’s weekly Wednesday Happy Hours in the special event room, where he socialized with all his neighbors and friends, while his friend Scott played the piano. Scott returned that evening to play for all of us one last time, along with colleague Paul Dykstra, CEO of Chicago Cosmetologists, who flew in especially for the occasion. 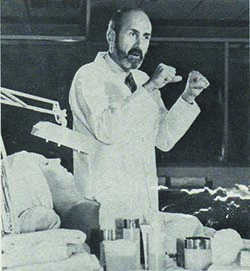 The crowd in the room that evening was a “who’s who” of the aesthetics industry. Susanne Warfield, executive director of the NCEA, was there celebrating the life of our close friend. For years, Joel and I got together with Susanne to celebrate our birthdays at Capsouto Frères, an old restaurant downtown, by sipping on dirty martinis at the bar before discussing the latest advancements in skin care over dinner and chocolate soufflés. Even after his retirement, Joel’s passion for the field never waned – and neither did his penchant for a colorful comment. Conversations with Joel were always entertaining and his sharp sense of humor left an impression on everyone he met.

I was caught off guard and broke into laughter, forgetting any apprehension I may have had about addressing the group. Thanks to Joel and his quick quip, I was immediately both knocked off balance and flushed with confidence. At the time, I was surprised, but looking back, I should have expected that from him. Joel always kept everyone on his toes with his wit and he had an amazing way of genuinely building up others and helping them succeed.

Lydia Safarti, owner of Repechage Skin Care, spoke about her friendship with Joel. Joel was there to share her joy when her two daughters got married and to support her when her parents passed. For Lydia, Joel was a friend who became family. 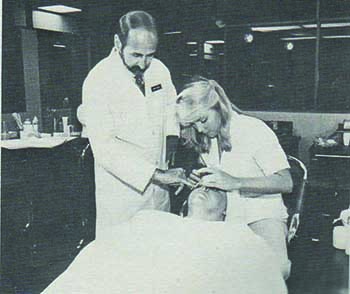 A couple of instructors from the Christine Valmy Esthetics School were also in attendance. Joel was one of the first skin care teachers at the school when it opened in 1965, which made it especially meaningful that they came to pay their respects.

Joel, like I, wanted standards in the industry. Without a license and guidelines, there could be no profession. As the science of aesthetics progressed, and, especially, as it became more medically-advanced, education and licensure became a must. Partly because we shared that passion, and partly because we purely enjoyed each other’s company, Joel and I had a standing Sunday brunch date for years.

I also had the pleasure of hosting Joel many times as a guest lecturer at Atelier Esthétique; and each time, my students were fascinated by his personality, knowledge, and passion for teaching about skin care. 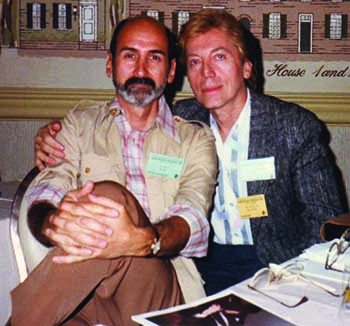 While Joel slowed down a bit at the end of his life, he remained as involved as he could in the field for as long as he could, simply because he loved it. He loved the people, the business, the science, and the developments that continued to be made.

For me, Joel’s passing has left a void in the industry almost as large as the wonderful impression he made on all of us during his life.

Members of AIA’s Academy of Legends look back on Joel Gerson:

I met Joel Gerson in the early 1970s at Christine Valmy. We both were much younger and starting out. My first impression of him was how much of a visionary he was. I have the highest regard for him. Our paths crossed often through the years. The industry is fortunate to have him as an achiever and incredible author who brought the most important information to the forefront in his textbooks. He created the skin care bible for our industry and for that we are all grateful.”

Lia Schorr, owner of Lia Schorr Institute, inducted into the AIA Academy of Legends in 1991 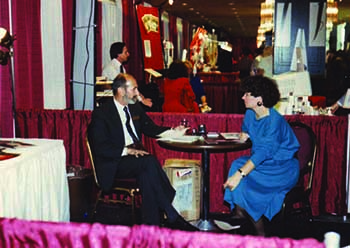 A consummate professional, he raised the bar on industry standards and education. His contributions will be remembered as his work continues to influence aestheticians around the world.” Rhonda Allison, founder and CEO of Rhonda Allison Cosmeceuticals, inducted into the AIA Academy of Legends in 2016

Joel Gerson lived a few blocks away from where I had my first office and spa on the upper east side of Manhattan, before I moved to California. When we met, I didn’t know who he was because I had recently moved from Paris to New York.

One afternoon, Joel walked into my brownstone’s retail store with an endearing smile on his face. The place was crowded. He walked straight to me, introduced himself, and said, ‘I’m Joel Gerson and I’m on the cover of this magazine,’ [holding up DERMASCOPE]. 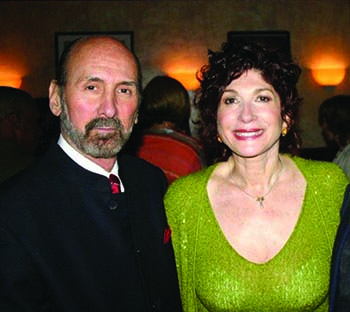 In that moment, I met both a man with whom I would have insightful conversations for years to come who helped elevate our industry, and DERMASCOPE – the magazine that influenced our industry so much.

I remember every detail of that first meeting. Joel was humble, easy going, and unselfish – sharing knowledge with aestheticians everywhere. I’m sad Joel is gone, but he remains a positive influence as an educator and warm human being.” Catherine Atzen, founder of ATZEN Superior to Organic® Skin Care, inducted into the AIA Academy of Legends in 2016

Joel was an educator who brought out the best in his aesthetic students and demanded they practice with the utmost perfection. Joel was serious about aesthetics and helped bring respect to our industry – that aestheticians are not cream pushers, but as valued as medical personnel.” Christine Heathman, L.M.E, founder of GlyMed Plus, inducted into the AIA Academy of Legends in 2008 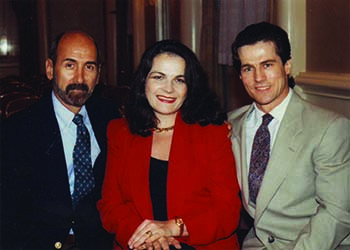 Joel and I shared so many things – a birthday, our love of the skin care industry, and a desire to share our knowledge. Joel always made himself available for lectures and teaching events for the Skin Care Association of America. We had so many trade show and teaching adventures over the years, as professional skin therapy developed in the United States. He was a true innovator and friend.”

Kay Acuazzo, past president of the Skin Care Association of America, inducted into the AIA Academy of Legends in 1989 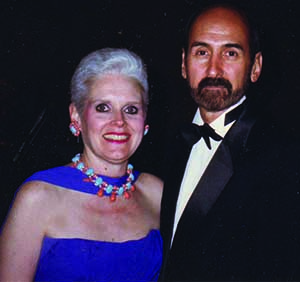 Joel Gerson was my friend, my dear mentor, and my inspiration. He was a true pioneer in esthetic education, the author of the definitive ‘Standard Textbook for Professional Estheticians,’ aesthetic examiner for the New York Department of State, and the leading educator responsible for maintaining standards of excellence in aesthetics. Yet, Gerson was more than a professional mentor. Since 1974, Joel was my friend, part of my family – my “mishpucha” – and I have been blessed to know him. He never missed holidays with David and me. I will always keep him in my heart and will miss him very, very dearly. May his soul rest in peace.” Lydia Sarfati, founder and CEO of Repêchage, inducted into the AIA Academy of Legends in 1991

Joel was one of the people who wanted to see my demonstration in New York on my first visit. It was always a pleasure to meet him on my visit to the United States. He was an influence in the skin care profession. I hope the long journey brings him peace and well-deserved rest.” Eve Taylor, O.B.E., founder of Eve Taylor North America, inducted into the AIA Academy of Legends in 2014 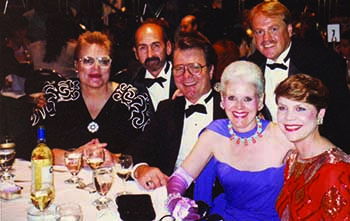 Joel was a pioneer and visionary in aesthetics education. He set a standard of professionalism and theory that created the foundation for the aesthetics industry today. I considered him a friend and colleague. He will be fondly remembered and forever in the hearts of all who knew him.” Catherine E. Hinds, founder of the Catherine Hinds Institute of Esthetics, inducted into the AIA Academy of Legends in 1990

Joel Gerson was a pioneer in the skin care industry. I loved his lectures. They were always easy to understand. Most of all, his lectures were amusing and funny. I used his aesthetics book in my skin care classes. Joel will be remembered for his dry wit and fun personality.” Letti Lynn, aesthetics director and owner at Letti Lynn Skin Care & Cosmetics, inducted into the AIA Academy of Legends in 1987 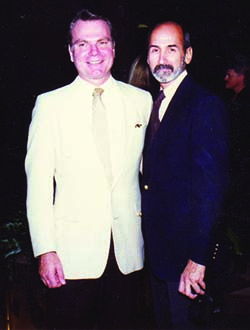 One of the biggest struggles of an industry like ours is consistency, cohesiveness, and a unified front to push forward and continue to raise the bar. Joel was at the forefront of unifying the aesthetics profession to commit to core education and the continued growth of knowledge and expertise.” Michelle D’Allaird-Brenner, L.E., owner of Aesthetic Science Institute, inducted into the AIA Academy of Legends in 2017

Joel Gerson championed the writing of a pioneering textbook. I have a signed copy of his original. When I wrote ‘Skin Care: Beyond the Basics,’ he called me and was so supportive. Joel always had the advancement of the profession at heart. He had an amazing sense of humor. We enjoyed many lunches and dinners together discussing the progress of the industry. He was a mentor and trailblazer. I will miss him and always hold him in great respect for his boldness in establishing an anchor in aesthetics education.” Mark Lees, founder of Mark Lees Skin Care, inducted into the AIA Academy of Legends in 1990