Eva Friederichs- A Legend in Aesthetics 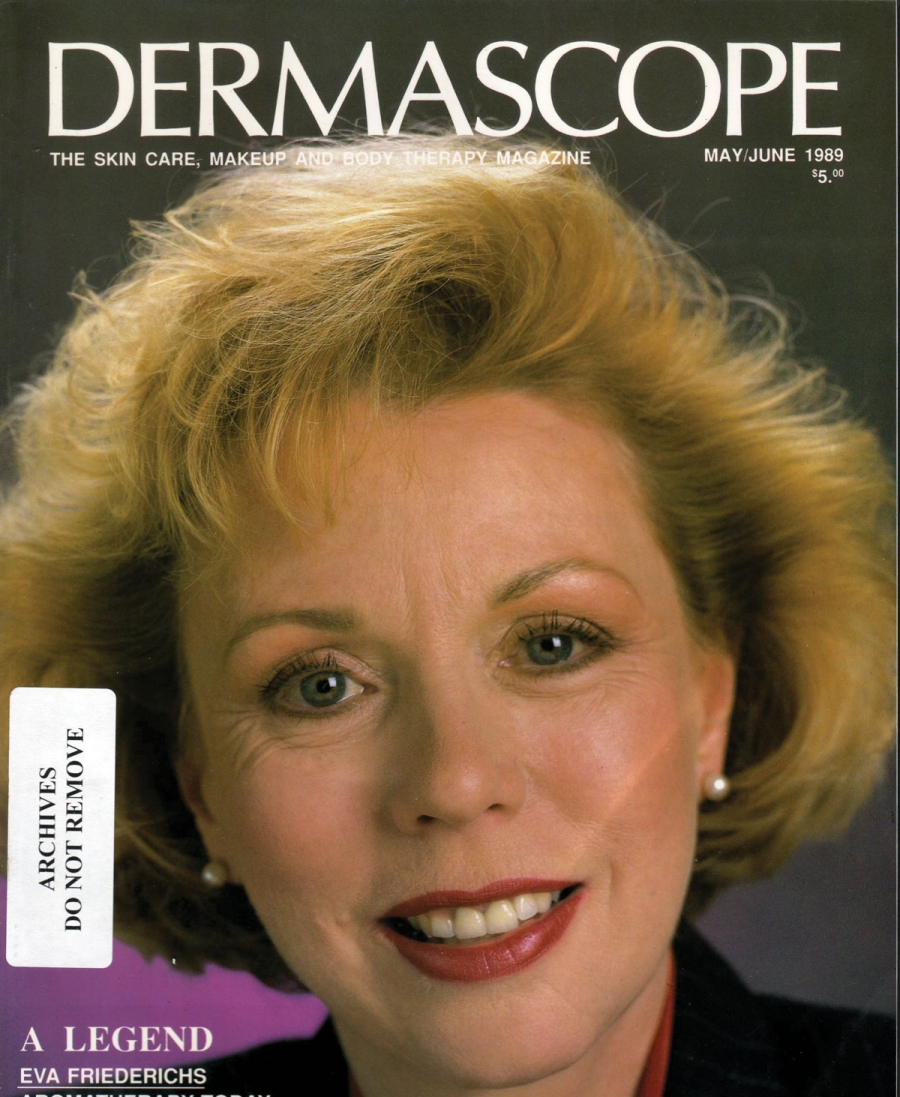 Eva Friederichs- A Legend in Aesthetics

Say the words “American Esthetics” and watch Eva’s eyes light up.  As one of the pioneers of esthetic training and services in the United States, she remembers how far we’ve come in a little more than 20 years.  But she continues to dream of where esthetics will be in another 20.

I have embarked on this adventure of recording Eva Friederichs’ life story and the first subject that came up is the fact that she has seven children, 8 grandchildren, and it all began in Libertyville, IL.  Married at the age of sixteen, Eva was 31 years old when her seventh child was born.

I’m 33 years of age.  Stop and consider the fact that by this time in Eva’s life she had SEVEN children with the youngest going on two! May we have a moment in silence, please?”

In 1963 (living in Pennsylvania), Eva’s husband, Joe, opened his first beauty salon.  With six daughters do you think this was mere coincidence?  The family moved to California in 1964, and in 1965, Joseph’s of Danville was born.  Working at the salon, Eva found herself gravitating towards make-up, health and skin care.  Knowing Eva like I do, it seems only natural.  What other aspect of our business is closer to the client? She has an incredible capacity for caring and giving and listening, something very rare indeed.

Shortly after settling in, Eva joined the California Cosmetology Association.  There was no active affiliate in her area she joined the San Mateo Chapter.  Next she took the Fashion Committee test and serves as the Makeup Advisor.  The following year, Eva reactivated her local affiliate where she served as President for two years.

In 1973, Eva and her daughter, Eva Jr., attended a show in Las Vegas, the first show in the United States that dedicated itself to skin care.  The show was produced by the venerable Dermascope Legend Robert Oppenheim.

Mr. Oppenheim was planning an educational esthetics show in New York City and both Evas were invited to speak which they did - mother on nutrition, daughter on marketing.  And that, as they say, was only the beginning.

As a licensed cosmetologist who switched from hair to skin, Eva recognized the need for specialized education in the aesthetic field.  With this in mind, she founded the Greater Bay Area Association of Estheticians.  Within a short time this association had grown quickly into a valuable forum of education and networking.  Eventually this organization was absorbed into the Aestheticians International Association, founded by Ron Renne’, founder and current editor of Dermascope magazine.

Eva helped to formulate and see to the passage of the separate license for esthetics and in 1977, California passed a 600 hour course.

At that time, Eva was teaching at a Junior College developing the curriculum for the aesthetic program.  The program she developed continues to be used by many schools today in California and throughout the United States.

Ms. Friederichs remembers her first aesthetic congress in Dallas, Texas, in 1979, where she had the pleasure of working with Ron Renee’ and Erica Miller (another outstanding Legend), the hosts of the event.  It was thrilling for her working with kindred souls who were moving along the same path as herself.

The following year, Eva and Dermascope Legend Robert approached Eva and asked her to serve on the steering committee for a newly formed committee of NCA.  This committee, which later became Esthetics America, saw the three major independent aesthetic associations become part of the National Hairdressers and Cosmetology Association, (NHCA).  It was an exciting time to be with the leaders in the industry and help shape the future of esthetics in the Unites Stats.  Eva was one of those proudly voting to have the word ‘Hairdresser’ dropped from National Hairdresser and Cosmetology Association and become the National Cosmetology Association (NCA).  Esthetics America is now a committee of equal status with Hair America and Nail Technicians of America.

Now came the great honor of being chosen as the Makeup Designer for the Fall and Winter Trend Release in 1986.  Her look was presented in New Orleans at the National Cosmetology Association’s semi-annual convention.

Eva truly has been a pioneer for esthetics in the United States.  For twenty years now she has been attending trade shows, lugging products, equipment and slide show presentations to and from airports.  Setting up and tearing down the booths, demonstrating facials, putting makeup on anyone and everyone, baring bodies for body work, lecturing on nutrition, etc.  You name it. If it ad anything to do with aesthetics, Eva was doing it. Fifteen, twenty years ago, nobody, I mean nobody, was doing facials at the trade shows.  I know because I have been modeling for Eva since time began.  In fact, there was one show (1970-ish) when Eva was modeling for Sally Ponce, then the Olympic Trainer for the USA Hair Team, Eva Jr. was modeling for Peter Hanz, and I was modeling for Jewels Sasstevens, an instructor at The College of San Mateo.

Let’s go back to Eva’s working career during the years she was assisting in building the industry.

The two Eva’s then acquired their first school which was quickly followed by their second.  These schools grew to have a student body of 30.  It was lucky student who trained under Eva during that time.  She had been concentrating on getting the separate licensing available foe estheticians.  Now she could focus on the actual esthetic training.

The students who attended her school received the most outstanding hands on training that I have yet to see.  I can tell immediately as someone sits down and ‘pick’ up their hands to work if they trained under Eva or not during this phase.

I remember when she first started advanced training for aestheticians.  She picked up the students (4 or 5 of them), at the airport, brought them home and they lived with her for the next three to four days.  She brought them to the salon, to the schools, to her office.  She trained them at her home, showing and sharing everything she was able to for maximum exposure of esthetics in the real world and then back to the airport!

This tradition continues even today as aestheticians fly form all over the United States for advanced study at Images of Success Esthetic Institute of Oakland, California.  The week spent there with Eva and her staff leaves people feeling that not only did they receive outstanding, useful knowledge for their business but they are now part of her family.  And yes, she still has students stay with her at her elegant Victorian home in Alameda.  She’s really crazy!

She is in “Who’s Who in America”, Who’s Who in California, and has appeared on “People Are Talking” on CBS.  She has done radio spots combining skin care and genetics, always one of her favorite subjects.
Eva trained under internationally recognized experts including Anushka from Payot of Paris, Ben Benson Hollywood makeup artist, Elizabeth Armstrong Jones of England and many internationally known experts.  She was admitted by a special examination to CIDESCO in 1981.

She has been member and contributor for the Continuing Education Committee for the California State Board of Cosmetology.  She has been invited to participate in the advanced education for aesthesis in Oregon and Georgia.

When Eva is asked, “What is the secret of your success”, she smiles and says “I have no secrets.  I share everything I know.  I like to encourage people to make a career for themselves, not just a job.  A job puts bread on the table, but doesn’t satisfy your higher needs and aspiration.  A career, on the other hand, is all-consuming.  You’ll, eat, sleep and wake up with it.  You will find yourself creating, managing, motivating, - yourself and others.  It becomes a passion.”

And she becomes recognized as a Legend.  One we have waited impatiently for.

Because Eva is a ‘Major Mother’, she insisted we had to mention her family.  So I thought I would get it over in one fell swoop! Eva (a.k.a. Mimi, her mother) is the warehouse manager at the Institute.

#1) Eva Jr. is the owner of a salon in Pleasant Hill, CA, called Red Hot Hair.

#2) Joe Jr. owns a Firestone store in Danville, CA, with his beautiful and talented wife, Sharon, a cosmetologist.

#3) Toni is the office manager at Images of Success Esthetic Institute.

#5) Tina is a cosmetologist, lives in Grass Valley with her husband and two kids.

#6) Terri is a court reporter in San Francisco, planning to move to Europe.

As for me, her protégé, I’m thrilled to see her get the recognition she deserves.

Yes, there are some BIG footstep’s she’s leaving for me to follow and to say I’m proud is the understatement of the year.