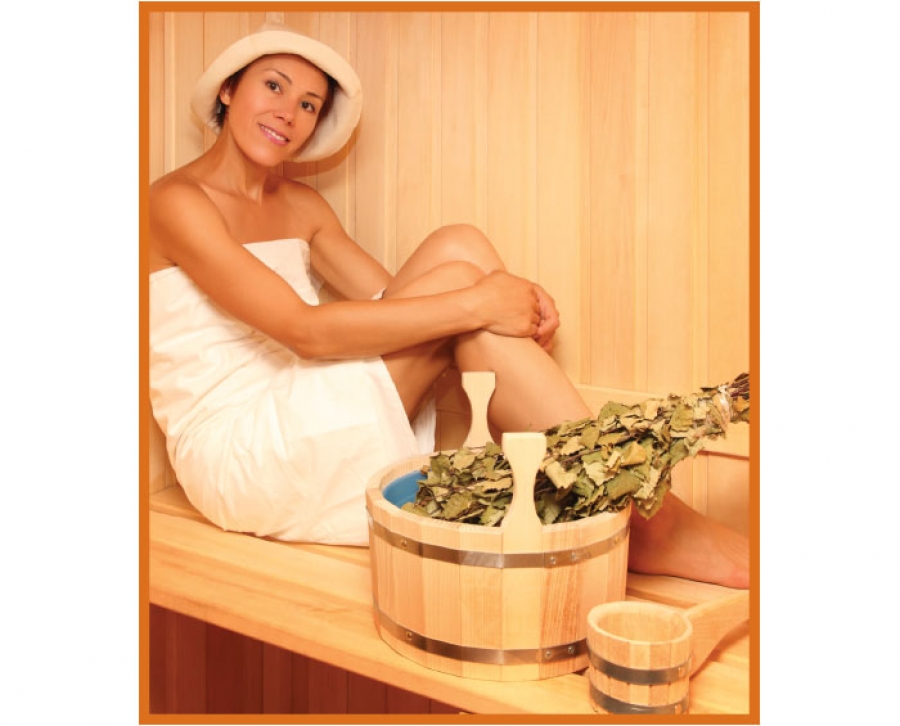 Saunas and steam baths are hyperthermic procedures earning a special place in balneology. They are meant for the healthy, rather than the sick, their purpose being prevention of disease and physical strengthening.

Sweat baths were very popular in central and eastern Europe among the Slavs. The popularity of sweat baths spread to the west, where they appeared in German and Swiss villages. Heat was produced in a live place where water was cast on heated stoves. People rubbed their skin with scarves and whipped themselves with birch or oak branches to produce a hyperemia of the skin. The procedure was ended by a cold drenching, a cold bath, or by lying in some cool place.

Arab and Turkish baths developed from Roman baths. After sweating had been induced, running water was poured on the body. The pools, exercises, and gymnastics used by the Romans were not as common. After Napoleon's Roman campaign in the second half of the 19th century, sweat baths spread throughout Europe from France. In 1856, an Irish physician installed the first "Roman Irish" (or "Turkish") Bath in York, Ireland; they were hot air baths with cold and warm showers. The heat baths of Japan are not taken for cleansing, as washing with soap and going for a swim precede the bath, but as treatment for rheumatism.

The body tries to increase its heat loss through the skin and lungs. If the environmental temperature exceeds that of the body, the only way to have heat is through sweating. As the cutanous circulation increases, heat is accepted more readily by the body from the environment. Body temperatures range from 99.6 to 104 degrees Fahrenheit, thus the physiologic changes that occur during the sauna are due to the rise in body temperature and the influence of the reflexes of the hormonal and nervous systems that attempt to increase the heat loss.

Sweat – No marked loss of fluid occurs through the lungs since high humidity saturates the inhaled air with water vapor as the air cools in the respiratory passages. There are great individual variations in mean weight loss and electrolyte content of sweat, sodium, chloride, and potassium.

Using a sauna-steam room to help lose weight is a temporary fix that can have permanent consequences. Sauna-steam rooms are typically heated to a temperature between 110 and 114 degrees Fahrenheit. This high temperature causes clients to sweat, meaning their body is losing water. From this perspective, sitting in a steam room can indeed help clients lose a moderate amount of weight, but it is important to note that they are losing water weight, not fat. As soon as they leave the steam room and start drinking water again, they will gain back any lost weight. They are far better off working up a sweat by exercising, which will help burn calories and shed fat.

While it might be tempting to use a sauna-steam room to lose a bit of water weight before a special event, doing so can have serious consequences. When a person sweats, the body loses both water and electrolytes. Losing too much of these vital substances increases the risk for a heat stroke, kidney damage, heart-related emergencies, and even death. If a client needs to lose a few pounds quickly, advise them to do 60 to 90 minutes of daily high-intensity cardio and cutting their daily calorie intake instead of using the sauna to shed pounds. If a client really loves steam rooms, they are in luck as many gyms and fitness clubs are equipped with them. They can reward themselves with 10 minutes of steam for every 30 minutes they spend working out. This is a great excuse to hit the gym every day and the moist heat of the steam room will offer a relaxing finish after a tough workout.

Steam bath indications include the easing of arthritis, fractures, sprains, sciatica, chronic low back pains, preliminary to tonic cold, and eliminating stored toxins. A free flow of perspiration will often relieve the extreme pain in arthritis, gout, sciatica, and other issues.

There is an intense but tolerable heat in the sauna room, which causes profuse perspiration within a few minutes. The ideal way is to perspire, then take a tepid or a cool shower, then plunge into a cold pool of water. The total effect of these three water activities creates a feeling of great cleanliness and exhilaration. The body soon develops a capacity to repeat this process frequently clients can control the tendency for headache or dizziness by applying a cold compress to the forehead.

Sauna and steam rooms use claims to improve blood circulation, drain sinuses, rejuvenate skin, and relieve joint and muscle tension. These are definite benefits, but sauna and steam rooms also have their drawbacks. A little caution and forward thinking can help avoid the negative effects of steam rooms.

Infection – Bacteria and fungi prefer damp, warm environments with little light. This makes steam rooms perfect breeding grounds for infections to spread. One of the most common is athlete's foot, which can occur when bare feet are exposed to the floor of a steam room. Athlete's foot causes stinging, itching, and burning between toes and other areas on the foot. Another common fungal infection is jock itch, which affects the upper thigh, genital, and buttocks. If someone who has jock itch was sitting on a bench in a steam room, it increases the likelihood the next person who sits there will become infected as well. Advise clients to always wear shoes in a steam room and if they sit on a bench, they should place a clean towel beneath them.

Dehydration – Steam room temperatures range from 110 to 116 degrees Fahrenheit, with 100 percent humidity. A great deal of perspiration ensues and dehydration can result. The best way to avoid this is to drink plenty of water before and after the steam room and not stay in the steam room for more than 15 to 20 minutes at a time.

Special Health Conditions – Clients with respiratory disease, heart palpitations, high or low blood pressure, diabetes, and the elderly should consult a physician before entering a steam room. Pregnant women should avoid them altogether. Steam rooms have a negative effect on blood pressure, which inhibits oxygen flow to the fetus and may cause birth defects. Male infertility may also result from spending time in steam rooms. According to the Harvard Medical School, high temperatures can make sperm inactive and disrupt development.

Dr. Reinhard Bergel is president and founder of H-e-a-t. Inc., (Health-enhancement-accessories-training) Spa Kur Therapy Development. He is an advisor in Spa Kur facility development and conducts spa staff training. He has published numerous articles as well as the comprehensive SPA ENCYCLOPEDIA. Bergel is a founding member of the American Society of Lymphology and American Day Spa Association and has operated a health spa clinic and physical rehabilitation center for almost two decades. He has been practicing and teaching Lymphedema Management since 1986. This email address is being protected from spambots. You need JavaScript enabled to view it.