Written by   Martin Zucker, co-author of Earthing: The Most Important Health Discovery Ever! 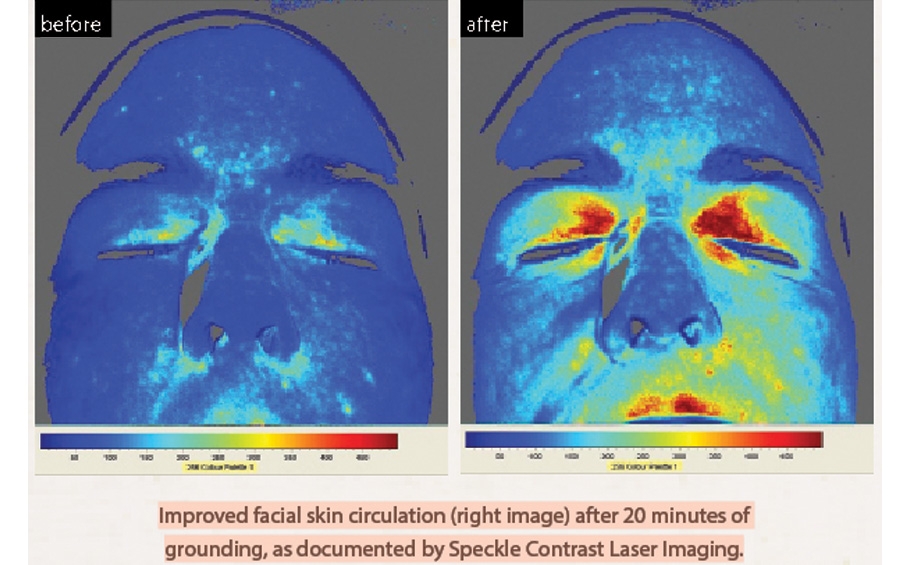 Spas and salons abound with products and techniques designed to enhance facial microcirculation, oxygenation, and blood-born nutrition to the skin. What if there were something foundational that could be used to maximize the effects of these products and methods?

There is! It is called earthing, or grounding, and it is starting to create widespread interest in spa and beauty circles. Simply said, grounding the body means establishing bare skin contact with the natural, subtle frequencies that vibrate throughout the surface of the earth. This is easily accomplished by going barefoot outdoors or using special conductive sheets, pillowcases, or mats that are connected to the ground while sleeping, working, relaxing, or during a spa treatment.
As documented in more than a dozen studies, the benefits of grounding include improved blood viscosity and circulation, reduction and prevention of inflammation, a primary cause of accelerated skin aging, calming of the nervous system, better sleep and improved recovery, and more vitality. It is easy to see how these benefits contribute in a foundational way to healthier skin and appearance.
One of the latest earthing studies, published in the Online Journal of Cosmetics, Dermatological Sciences and Applications, demonstrated for the first time that grounding significantly improves facial skin blood flow. In the 2014 study, electrophysiologist Gaétan Chevalier, Ph.D., of the Developmental and Cell Biology Department at the University of California at Irvine, used sophisticated laser speckle contrast imaging and thermal imaging to document changes in the facial circulation of 40 volunteers, individually monitored for an hour, while sitting either grounded or fake-grounded in a comfortable recliner chair. 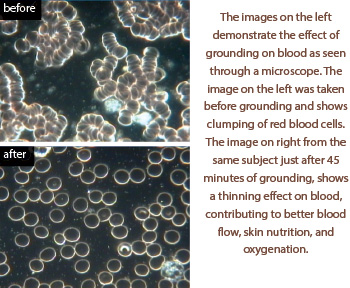 The participants were randomly divided: 27 were grounded using the grounding equipment connected to the earth during their session; the other 13 participants were not.
Both laser and thermal imaging techniques only showed significant improvement among the grounded subjects. The laser camera revealed, in fact, a fascinating and clear rhythmicity in the facial blood flow of grounded subjects. Such rhythmicity relates to a more efficient regulatory effect on blood flow by the autonomic nervous system.
Chevalier commented in his paper that autonomic nervous system regulation of facial blood flow dynamics “brings to mind an analogy of an efficient thermostat that activates or deactivates the heating or cooling system according to temperature fluctuations within the controlled environment.” For the body, grounding may contribute to the restoration of regulation by the autonomic nervous system of the distribution of blood, and therefore distributed oxygen and nutrients to the various organs and systems according to their needs.
“The results demonstrate, for the first time, that even one-hour contact with the earth restores blood flow regulation to the face that may enhance skin tissue repair, health, and vitality, as well as optimize facial appearance.”
Other mechanisms activated by grounding very likely play a role as well, he said. They include the following:

Such effects imply enhanced nourishment of facial tissues and functions, and, based on earthing experience throughout the world, one can expect that continued grounding would generate continued benefits to skin, complexion, and vitality.
One participant in an earlier earthing study was a 47-year-old marriage counselor with multiple sclerosis. She, like others in the study, was grounded for about 40 minutes. Afterward, she visited the restroom and rushed back with a surprised look on her face. She told the study coordinators: “I just took one look at myself in the mirror and could not believe what I saw. It was as if I had slept for three days or been on a healing retreat. I looked so much better and younger. I had been very tired, sad, and stresesed out and was amazed.”
Her revelation is not unique. Many other women have made similar comments, even after just 30 or 60 minutes of grounding, or after sleeping grounded. They notice a difference as they quickly feel better and look better. They speak of more radiant skin, brighter eyes, and more vitality.

At a 2012 women’s wellness conference in Southern California, the 100 women in attendance of the one hour lecture filled out a questionnaire before and after being grounded in the conference hall. When their answers were totaled up, at least 75 percent indicated that after grounding, they had a better mood, more energy, and an improved complexion that radiated more vitality and color. All such feedback and findings yield a common conclusion: When the body’s skin touches the Earth’s skin, the body’s skin benefits. It is a surprising health, energy, and beauty gift from Mother Earth.

Published in Body Care
Login to post comments
back to top
How to resolve AdBlock issue?
X