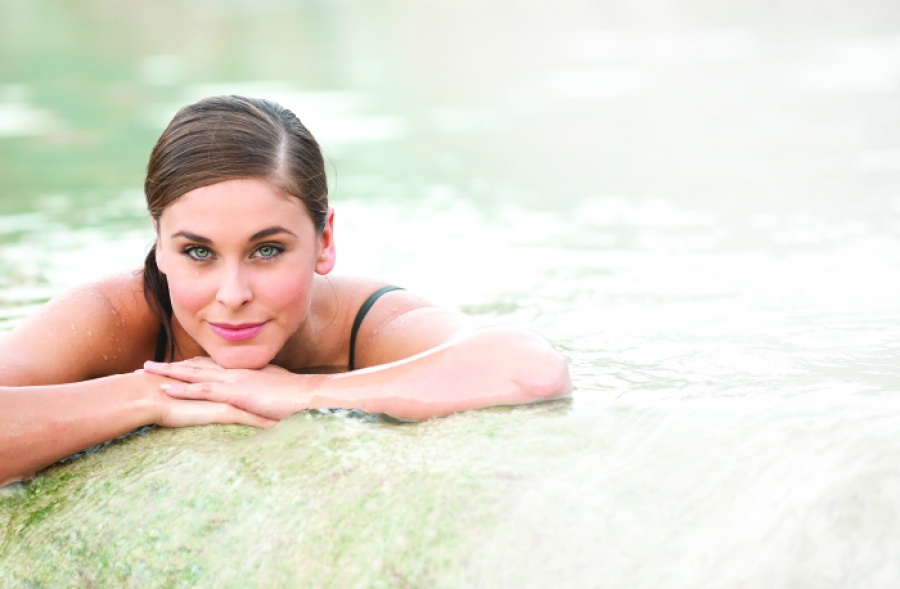 The origins of Kneippism and hydrotherapy are deeply rooted in the philosophies of natural healing and, in particular, naturopathy. Naturopathy is a time-honored health philosophy that advocates total balance and harmony in life through treatments and an adoptive lifestyle.

Naturopathic practices endorse vitality in human existence by embracing the healing power of nature and supporting the belief that the body may be self-repairing and self-regenerating by utilizing treatments and concepts from nutrition, exercise, sunlight, and water.

The term ‘spa’ was derived from the town named Spa, located in Belgium, and generally referred to treatments utilizing natural mineral springs where one could receive therapies for the ‘cure.’ The original delineation of a spa treatment was for one to regain health from both chronic and acute illnesses, by utilizing these healing waters, sunshine, and nature. The term hydrotherapy is derived from the prefix hydro, meaning water, and refers to the therapeutic use of water, at any temperature or form, including ice packs, vaporizers, and hot baths. The mechanism of hydrotherapy includes the mechanical and thermal effects of water and its interaction with the body. Hydrotherapy utilizes physical water properties such as temperature and pressure, as well as the integration of herbs or minerals to aid in stimulating blood flow, to encourage the endocrine system and associate neural systems in order to treat symptoms of ailments and diseases.

The Healing Water Movement
Vincent Priessnitz (1799-1851), a natural health advocate, was perhaps one of the earliest proponents of what is now considered modern hydrotherapy. He prescribed combinations of water, food, and air instead of traditional medicine as cures for common ailments. His legacy of therapeutic philosophies later became the basis of Father Sebastian Kneipp’s work.

Monsignor Father Sebastian Kneipp (1821-1897) was probably the most famous physician known to have proven the water cures. Kneippism, or Kneipp therapy, is a system for overall health and wellness, involves many aspects of natural healing but while primarily focusing on hydrotherapeutics. Kneipp’s own health experience became his life’s work – he contracted tuberculosis while studying in Munich, Germany, and began applying herbs, both internally and externally, along with his water cure applications. He added to his regimen the recommendations of a simple nourishing diet, fresh air, exercise, and emotional and spiritual order in life. 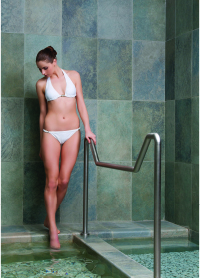 that are still used today. Kneipp’s therapy places prodigious emphasis on the alternation of water stimulus, herbs, and the integration of over 120 types of water treatments. Kneipp wrote many books that were published in several languages with the intent that readers would benefit from his advice on water cures. He treated the majority of his patients for free and it is said that he died penniless. His legacy is survived by the Kneipp Association, founded in 1890 by former patients, the International Society of Kneipp Physicians, and followers throughout the world. There are many Kneipp spas throughout Germany — the most famous is located at Bad Worishofen in Allgau where Kneipp practiced all his life. The Kneipp concept today, as well as the philosophies of other earlier hydrotherapists, thrives in many destination spas and health resorts throughout the world.

Kneipp Therapy and Treatments
Hydrotherapy – Wraps can consists of either a full body wrap or a partial body wrap in which the body is compressed with wet or dry cloths that are applied in varying temperatures from hot to cold. Various herbs or tinctures may be added for additional therapeutics. The effects of the therapy are dependent on the length of time the wrap is left on, temperature, and additives.

Washings are conducted with washcloths and are considered the most simple and mildest treatment. The body is rubbed with a washcloth to leave a small amount of water on the skin, with herbs frequently added to the water. As cold water is applied and evaporates, the body cools further and affects vasoconstriction and stimulation of the sympathetic nervous system. The parasympathetic nervous system is activated by the application of hot water and facilitates vasodilation.

Affusions are often applied while the client is immersed in the bath vessel or hydrotherapy tub. This is achieved by the application of water through a hose that the therapist holds. The professional then applies directional massage with a variating water stream as the client is soaking. The pressure of the water may be adjusted to attend to specific areas of inflammation or discomfort. A flar affusion is an application technique of applying a water stream, without any specific water pressure, that simply flows over the body part or section. Today, the Vichy shower and Scotch hose treatments are examples of varying affusions that have applications of direct streams of water that can range from moderate to strong pressure.

The immersion bath is the most famous of all the Kneipp therapies and can be performed with a partial soaking of the body, such as an arm or leg, or for full body immersion. The Kneipp bath traditionally calls for the infusion of herbs to the water, whether it was hot or cold. A traditional dry brushing to encourage lymphatic flow and create a warming sensation, increasing the effectiveness of both the bath and herbs, often preceded the bath. To this day, Kneipp herbs and similar herbal tinctures are available throughout the world for spa and home therapies.

Nutrition Therapy – Highly nutritious and fresh foods based on a lower protein and high greens and fiber diet. The Kneipp diet therapies are also treatment specific to gout, diabetes and other metabolic problems. 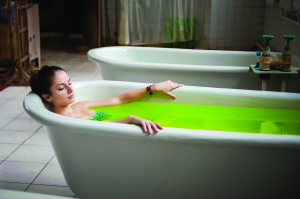 Properties of Water
Water is a therapeutic agent and an excellent conductor. It has the ability to store and transmit heat, which renders it most appropriate for spa therapies and medicinal purposes. The solvent properties of water allow for its usefulness in the most common of all hydrotherapy procedures, while its non-toxic affinity allows for use both internally and externally, even in individuals with acute and chronic sensitivities. Water also has the ability to change form or stay within an easily obtainable temperature range. As ice, it is an effective cooling agent. In the liquid state, water may be applied as packs, baths, sprays, or compresses and at any desired pressure and temperature. As a vapor, it may be employed in vapor or steam baths or by inhalation. Water therapy has been used in the treatment of depression and anxiety¹, fibromyalgia², and is listed in alternative therapies in the treatment of cancer³.

Biophysiologic Activity in Hydrotherapeutics
Water therapy in the treatment room, performed by a body therapist or skin care professional is based on primary principals: 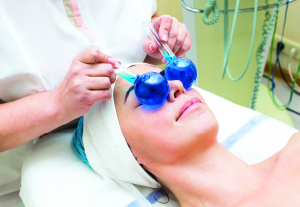 Skin care professionals frequently perform modified concepts of thermoregulation in the treatment room for both skin care and body therapy.

The application of steamed towels followed by the cool down of the skin, after the removal of the towel, is a simple form of thermoregulation. This protocol is one of the most widely used applications used in Kneippism. The application of dry warmed towels, warming hammer, or other heating instruments, encourages blood flow and oxygenation, and is an addition to facial massage. It may also be used as a massage alternative.

The use of chilled Golden Spoons®, beauty globes, and metal roller instruments made from glass or metal and filled with cryogenic liquid material offers vaso-
constricting activity. The application of cold uses the principal of contraction and attends to vaso distensions, acting in a constricting manner. The cooling devices may also be incorporated following a microdermabrasion, extractions, waxing, or skin peeling treatment as a final compress to aid in inflammation and erythema.

The alternation of extreme temperatures may activate cell metabolism by raising core temperatures, increasing blood and lymphatic circulation through various stimuli, which remains one of the most important keys to healthy and vibrant skin. These tools bring forth the basic evidences of the body’s ability to react naturally to both stimulating and sedative activities. 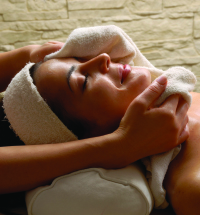 Application and Protocol Considerations
It is important to consider the familiarity with use of thermoregulation principals, anatomical aspects of body treatments, and treatment room decorum. Make sure to have a complete health and medication profile of the client before starting. In addition to a thorough comprehension of water therapies and all equipment used, a pharmacological understanding of herbs, tinctures, and essential oils used during treatment and possible complications and contraindications is necessary.

Prior to using cold water for the entire body, the core temperature should be elevated by taking a warm footbath or similar protocol to raise the temperature. Warm robes, slippers, and dry heated towels should be available at all times. Following the application of a cold therapy, and before completing the treatment, warm the body for 10 to 15 minutes with a comfortable method such as dry warm blankets. Ensure temperature regulation of towels, packs, hydroculators, and other devices applied to the skin whether warm or cold. If necessary, use a thermometer for devices and water temperature and a digital skin thermometer for gauging comfort level.

Alternate the treatments each time so that the body of the client does not become accustomed to a particular regimen. Hydrotherapy and body therapy in general should not be conducted in a hurried manner – consideration must be given for the client to rest after the therapy has been applied. Remind clients that alcohol, tobacco, caffeine, or heavy meals must be avoided before and after the hydrotherapy treatment. Water or a light nutritious beverage should be offered, particularly after treatment.

Erin Madigan-Fleck N.M.D., C.N.H.P., L.M.C., has over 30 years of experience in the aesthetic and natural health industry, and is licensed as a master cosmetologist and aesthetic instructor in Georgia. She is a nationally Certified Natural Health Professional, holds a bachelor’s degree in natural health, a master’s in holistic nutrition, and is a doctor of naturopathic medicine. She served her clinical residency at Progressive Medical Centers of America in Atlanta, Ga. Madigan-Fleck has written a complete course in holistic and integrative aesthetics and is currently working on a book to be released in 2015. This email address is being protected from spambots. You need JavaScript enabled to view it.