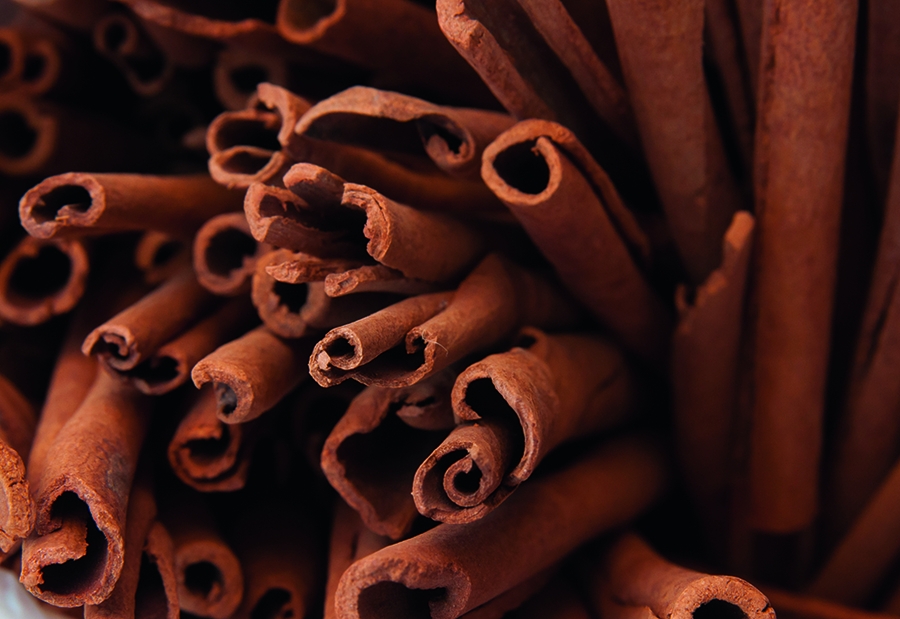 Cinnamon is perhaps one of the most frequently used spices in the world for its wide appeal, from its us in culinary arts to assisting in the control of high blood pressure. This plant and its counterparts have been studied, praised, and esteemed for centuries and its exploration is as vast as its uses and accolades. Its botanical genealogy hails from the evergreen species of the Lauraceae tree. The inner bark of this tree yields the harvest that is grown for two years before coppicing (cutting the stems at ground level). The bark is then peeled off from the tree into strips to dry and formed into what is called “quills.” Quills are the rolled two-to-four inch “cinnamon sticks” in the curled form of cinnamon that most are familiar with.

Cinnamon, namely “Cinnamomum zeylanicum” and “Cinnamon cassia” contain several phyto chemical constituents such as phenolics. Phenolics are compounds found in plants that are essential in the human diet and contain high antioxidant potential, which may lower the risk of health disorders. Many spices also have high Trolox equivalent antioxidant capacity (TEAC) and oxygen radical absorbance capacity (OREC) values, which indicate the total antioxidant capacity in fruits, vegetables, beverages, and supplements. The higher the OREC and TEAC value, the greater the potential to neutralize free radicals.

Cinnamon’s OREC value measures 3,417 in one teaspoon1 – the highest OREC reading is 350,000. Cinnamon bark also contains procyanidins and catechins, which are powerful antioxidants. According to the University of California at Davis, there are five different types of catechins; however, they all share a similar chemical structure that enables them to stabilize free radicals.

Amazingly, these unstable chemicals are formed as byproducts of normal digestion after exposure to chemicals in cigarettes or other chemicals. They are also activated and develop in the eyes and skin when exposed to sunlight.2 Cinnamon is also effective against advanced glycation end products (AGEs), due to the isolation and variety of phenolic and flavonoid compounds. These include epicatechin, catechin, and procyanadin B2, which have exhibited inhibitory activities on the formation of AGEs. The anti-glycation activities of phenolic compounds are due to the high antioxidant potential and reactive carbonyl species.2

According to an intensive journal compiled on the activities of cinnamon, numerous studies have cited and confirmed the antimicrobial activities of cinnamon and its constituent oils.3 For example, Matan and others reported the effects of cinnamon oils on different bacterial, fungal, and yeast species, indicating that cinnamon is a natural antimicrobial agent. Goñi and others described the antibacterial activity of a combination of cinnamon and clove oils against gram-positive organisms, as well as against gram-negative bacteria. A study from Hili and others indicated that cinnamon oils have potential action against various bacteria and yeast. A recent study reported the activity of the aqueous extract of cinnamon and other plants against oral microflora. Overall, the essential oil from cinnamon is more potent than other tested plant extracts.2

Cinnamon oil is used as a medicinal in Ayurvedic medicine for aching joints, rheumatisms, toothache, sore gums, decongestant for the respiratory tract, urinary problems, and coughs and colds. Recent studies have found cinnamon to be quite effective for “metabolic syndrome” a “pre” stage of insulin resistant type 2 diabetes. As little as two teaspoons of the spice have shown a marked effect in people who were not on insulin medication. It achieves this effect by delaying emptying of the stomach content after a meal, which prevents blood sugar peaks. It also sensitizes insulin receptors and inhibits an enzyme that inactivates these receptors, thus, making a significant impact on glucose uptake. Cinnamon can easily be added to foods and drinks as part of a normal diet. Another study has shown that cinnamon can have a beneficial effect on cognitive function. It was shown that people who used cinnamon prior to test situations performed better than the control group. They also appeared to process new information better.”4

Cinnamon, or “dalchini” as it is often referred to in Hindi, is frequently used in beauty preparations and has been for centuries. One recipe that has been widely promoted for acne calls for a blend of cinnamon and honey. The recipe calls for the mixing of three tablespoons of honey with one tablespoon of cinnamon, blending into a paste, then applying to the affected areas to be left on the skin for 20 minutes or overnight. The mixture has a drying effect on the skin, as it aids in stimulation to bring oxygen and blood to the skin’s surface.5 Essential oil of cinnamon has also been used in many preparations. However, it must be used sparingly as it has been known to cause dermatitis if used in excess, especially on sensitive skin. Cinnamon essential oils may act as a stimulant. Blended with olive and coconut oils into a massage oil, it can be used to nourish and stimulate hair growth and scalp conditions. Cinnamon, in more recent years, has been added into lipstick and lip product formulas as a plumping agent.

Each service may use various types of cinnamon powder and or oils along with ashwagandha, brahmi, comfrey, fenugreek, haritaki, turmeric, tusli, and shatavari herbs and spices. The ancient beauty rituals of Ayurveda have been passed down for centuries and support the premise that anything that is placed on the face or body for care should be able to be consumed. Many of the holistic oriented product lines frequently use cinnamon as a seasonal additive for the holiday and gift products or may use it as a staple ingredient in their line.

Cinnamon is a versatile spice and ingredient with many options for integrating into naturally-crafted and blended product formulations and has many options for health and wellness – for use topically and internally. Adding to main dishes, beverages, smoothies and teas, cinnamon adds flavor and evokes a warmness to the taste buds and senses. Cinnamon is truly the spice of life!

Erin Madigan-Fleck, L.E.I. is a licensed master cosmetologist, nationally-certified health professional, and holds certification as a dermatology technician and several degrees in natural health and naturopathy. She is co-owner of Intellective Aesthetics Advanced Esthetic Training and has a private practice – Naturophoria, in Atlanta, Georgia. This email address is being protected from spambots. You need JavaScript enabled to view it.