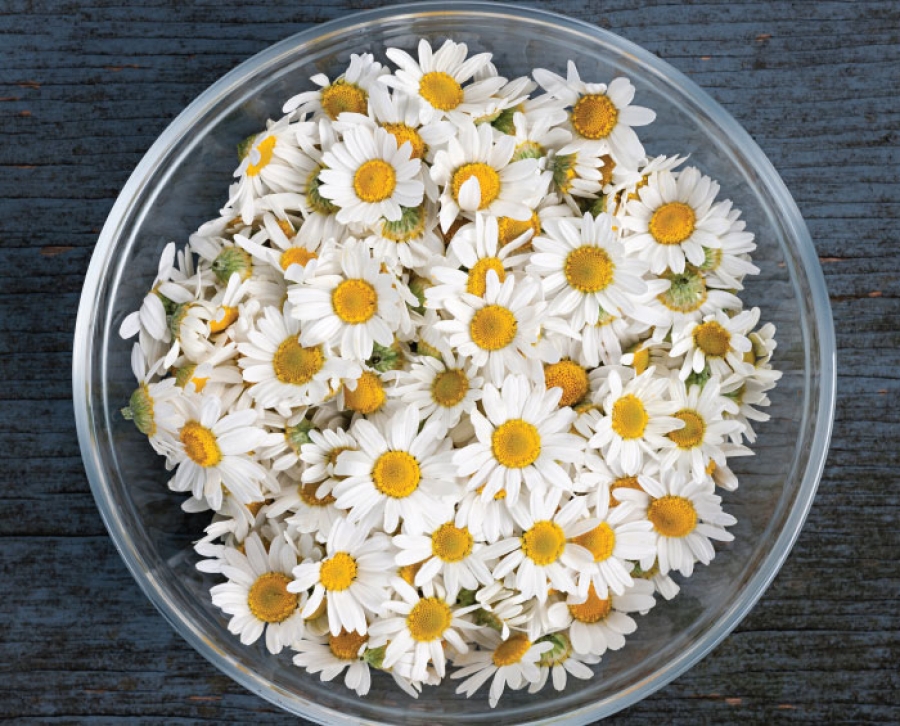 Throughout history, chamomile has been synonymous with healing, purity, and beauty. The earliest use of the herb was recorded in 1550 B.C.E., as evidenced in one of history's most important medical volumes, Eber's Papyrus. Its medical use dates back to medical antiquity when the early physicians, such as Hippocrates, Galen, and Asclepius, made use of it in their natural healing methods and prescriptions. The Egyptians dedicated chamomile to the gods, believing that it emulated the sun and would cure malaria. It was also widely used as a cure for fever, as a main ingredient in embalming oils for its ability to repel insects, and was highly prized as a cosmetic by the Romans. Chamomile is one of the nine sacred herbs of the Lacnunga, an ancient Anglo-Saxon herbal manuscript that was recorded in the 10th century. In medieval times, the petals were used for fragrance ambiance and used during rituals and ceremonies.

Chamomile tea has been steeped for over 100 years as a natural cure to treat a number of ailments, including gastrointestinal upset, tension, anxiety, sleeplessness, mouth ulcers, and skin conditions. As an Epicurean novelty, chamomile has been to added many food recipes and was used to make beer prior to the discovery of hops. It is one of the most highly-prized and widely-used herbs worldwide. The amount of chamomile imported into the United States each year is between 750,000 and one million pounds, with an estimated 90 percent being used in teas.1

Description and Monograph
Roman chamomile is found in many native countries throughout Europe and is cultivated in Germany, France, Spain, Morocco, and parts of Eastern Europe. The various species of chamomile require specific growing conditions and are varied in presentation. The word 'chamomile' is derived from the Greek words for earth apple, referring to its pleasing scent, which is reminiscent of apples. German chamomile is native to Europe and Northwest Asia, where it grows wild. This species of chamomile it has a very pleasant, sweet, grassy, and slightly-fruity aroma with flower blooms that resemble daisies. German/Hungarian chamomile is the most widely available for medicinal use and is chemically distinct from the Roman and English variety. Roman chamomile was not actually cultivated by the Romans; it was discovered by a British botanist. He discovered the herb growing wild and brought it back to England, where it is one of the primary forms of chamomile now cultivated. Chamomile was brought over to North America and was planted by the colonists, where the seeds found their way into the natural habitat and flourished into fields, yards, and gardens.

Chamomile is used in various forms and preparations. Powdered chamomile flowers are used for both health and beauty and medicinal ingredients are generally compounded through water or solvent extraction via various plant parts. The flowers are often used by themselves through a reduction of the blossoms with a mortar and pestle to be used as an herbal compression or mask. In this form, it may be applied for external inflammation or irritation. The blossoms may also be steeped as a strong tea and used as a fomentation or poultice. As a natural and holistic beauty preparation, it is used as an herbal cicatrisants, which diminishes the appearance of scars and hyperpigmentation, and as a vulneraries, which protects the skin from wounds, bruises, and inflammation. Chamomile is excellent for inflamed skin and telangiectasia, due to its ability to reduce blood pressure and aid in decreasing swelling. The healing and antiseptic power of chamomile is said to be more healing than seawater. Several of the chamomile species are used in various forms as antiseptics, disinfectants, and bactericidals as well.
The therapeutic properties of German chamomile include analgesic, anti-allergenic, antispasmodic, antibiotic, anti-inflammatory, bactericidal, carminative, cicatrisant, emmenagogue, hepatic, digestive, seditative, vermifuge, vasoconstrictor, and vulnerary.

Mechanisms of Action
The main constituents of chamomile include:
Phenolic Compounds – Phenolic compounds have the capacity to quench lipid peroxidation products, prevent DNA oxidative damage, and scavenge reactive oxygen species, such as superoxide, hydrogen peroxide, and the hydroxyl radicals.2
Apigenin – Apigenin is a flavonoid found in many fruits and some flowers. It is known for its anti-inflammatory, antioxidant, and antitumor properties. Pure apigenin is used primarily as a protein kinase inhibitor that may suppress tumor promotion and has antiproliferating effects. Numerous studies have referenced the benefits of apigenin and the suppression of cancer cells, including a study carried out by University of California Riverside biochemists.3
Quercetin – Quercetin is a flavonoid that has been reported to have an antihistamine effect. Its intracellular enzymes may inhibit a histamine release. This factor may explain why chamomile may be beneficial for contact dermatitis and photosensitivity.
Luteolin – Luteolin is a common flavonoid that has been used in Chinese medicine for treating various diseases, such as hypertension, inflammatory disorders, and cancer. Having multiple biological effects, such as anti-inflammation, anti-allergy, and anticancer, luteolin functions as either an antioxidant or a pro-oxidant biochemically.4
Isorhamnetin – Isorhamnetin has an anticancer effect that has been demonstrated in in vivo and in vitro tests and is similar in function to quercetin. In vitro tests with several cancer cells (lung, liver, and esophageal) showed that isorhamnetin induces apoptosis of these cells.5
Choline – Choline is a water-soluble nutrient that is usually grouped with B vitamins.
Fructose and Glucose – Fructose and glucose are sugars.
Coumarins (umbelliferone and herniarin) – Coumarins have antifungal and antitumor activities. They also have blood-thinning properties, thus increasing the blood flow in the veins and decreasing capillary permeability.
Fatty Acids – Linoleic and palmitic acid are fatty acids.
Vitamin C – Vitamin C is an antioxidant.
Beta Carotene – Beta carotene is a terpinoid, one of the most potent antioxidants that is reputed to stimulate cellular communication. Beta carotene reduces the ultraviolet-induced redness from sun exposure.
Tannin – Tannin is a naturally-astringent molecule.
Salicylic, Caffeic, and Gentisic Acids – These acids have various compounds that lend to an anti-inflammatory and calming effect.
Pectic Acid – Pectic acid, or polygalacturonic acid, contains pectin, a transparent, gelatin-like substance. 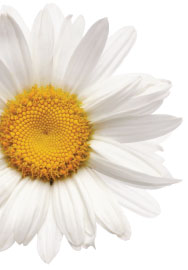 Pharmacology and Healing
The Imperial College of London found German chamomile to be a highly-effective herb during a study involving 14 volunteers who drank five cups of the herbal tea daily for two consecutive weeks. The researchers found that drinking the tea was associated with a significant increase in urinary levels of hippurate, a resultant product of plant based phenolics, some of which have been associated with increased antibacterial activity. This effect could explain why the tea appears to boost the immune system.7
Consuming the tea has also been associated with an increase in urinary levels of glycine, an amino acid that has been shown to relieve muscle spasms. This effect may explain why the tea appears to be helpful in relieving menstrual cramps in women. Glycine is also known to act as a nerve relaxant, which may also explain why the tea seems to act as a mild sedative.7Several pharmacological effects have been documented for German chamomile, based primarily on in vitro and animal studies. Such actions include antibacterial, antifungal, anti-inflammatory, antispasmodic, antiulcer, antiviral, and sedative effects.8
Chamomile oil, at a concentration of 25 milligrams/milliliter, demonstrates antibacterial activity against gram-positive bacteria, such as Bacillus subtilis, Staphylococcus aureus, Streptococcus mutans, and Streptococcus salivarius, as well as some fungicidal activity against Candida albicans.8
A double-blind trial examined the therapeutic efficacy of a topical chamomile extract on 14 patients with weeping excoriations from tattoo applications. Those using chamomile noted a statistically-significant decrease in the weeping wound area and increased drying in comparison to the placebo group.8
In an open, bilateral-comparative trial, 161 patients with eczema on their hands, forearms, and lower legs initially treated with diflucortolone valerate received one of four treatments: chamomile cream (Kamillosan), 0.25% hydrocortisone, 0.75% fluocortin butyl ester (a glucocorticoid), or 5% nonsteroidal anti-inflammatory. After three to four weeks, the chamomile cream was found to be as effective as hydrocortisone and demonstrated superior activity to the other preparations.8
Several tests have shown that apigenin and quercetin block the arachidonic acid pathway by inhibiting the phospholipase A, cyclooxygenase, and lipooxygenase enzymes. Additionally, flavonoids also inhibit the release of histamines. Flavonoids act against inflammation through their anti-free radical activity.9

Precautions and Contraindications
Chamomile should not be used internally, except under medical supervision. Clients should avoid chamomile if they have an allergy to daisy, ragweed, aster, marigold, or chrysanthemum; this plant may cause allergy-type symptoms. It should also not be used during pregnancy, as it is considered a uterine stimulant. Chamomile should not be used by those taking oral blood thinners as it contains coumarin, which may thin the blood and increase the chance of excessive bleeding. 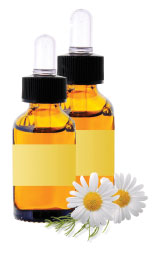 Erin Madigan-Fleck, NMD, CNHP, LMC, has over 30 years of experience in the aesthetic and natural health industries, and is licensed as a master cosmetologist and aesthetic instructor in Georgia. She is a nationally certified natural health professional, holds a bachelor’s degree in natural health, a master’s in holistic nutrition, and is a doctor of naturopathic medicine. She served her clinical residency at Progressive Medical Centers of America in Atlanta, Ga. Madigan-Fleck has written a complete course in holistic and integrative aesthetics and is currently working on a book to be released in 2015