Margaret Ancira - A Legend in Aesthetics 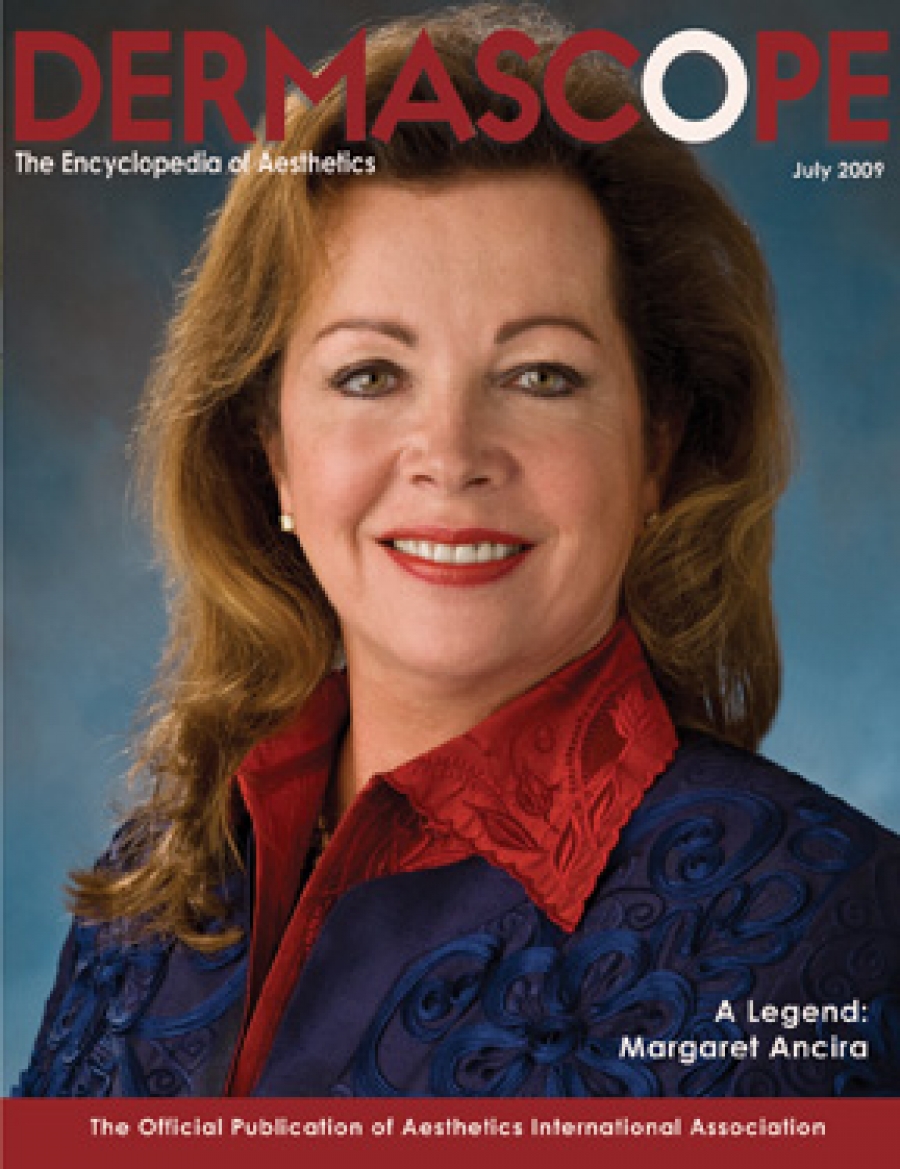 Changing the Face of Skin Care and Aesthetic Medicine

Margaret Ancira is the epitome of the entrepreneurial spirit, even if her path to prosperity didn’t begin until age 40. She grew up in a military family of eight siblings that ultimately settled in Texas. She married young, had a daughter, and became a single mother by the time she was 22. Her survival instincts kicked in, and she tried her hand at real estate, catering, auto sales, finance, insurance, and professional modeling. Her real passion, however, had always been medicine, first as a little girl mixing together cosmetic concoctions out of anything she could find in her mother’s medicine cabinet, to later working part-time in her stepfather’s obstetrics practice. “It was in my blood,” Margaret recalls.

In 1989, Margaret decided to focus on the things she loved and earned a license as an aesthetician. Pleased with this new direction, but still uncertain of her future, on a lark she visited a psychic who offered startling news. “She saw great success surrounding me, that I would be a pioneer in my field and gain international recognition,” says Margaret. Then, the reading took an interesting twist. “All of a sudden, the psychic said she saw two snakes entwined, but she didn’t understand what it meant.” Margaret did. It was a caduceus, the international symbol of medicine. Her renewed interest in skin together with that image was the catalyst Margaret needed to envision an untried concept: a science-based skin care line dispensed in doctor’s offices.

It was not easy to convince the extremely conservative medical community of the benefits of providing their patients with skin care. Physicians were accustomed to prescribing, not dispensing, products to their patients, and they were not comfortable with this new “sales” paradigm shift. Margaret knew they would need proof that the products could deliver visible results and do it safely and effectively. She personally visited physicians in their offices, walked trade show floors, and sought out physicians at medical conferences to pitch her philosophy and marketing concept.

Among her early supporters was Mark Rubin, MD, a prominent Beverly Hills Dermatologist and Assistant Clinical Professor of Dermatology at the University of California, San Diego. “I met Margaret at a medical meeting,” says Dr. Rubin. “I was impressed by her desire to put some science into skin care, which back then was a very non-scientific field. Her desire to move the industry of skin care in the direction of scientific understanding and education is what really has differentiated Margaret.”

Margaret’s pioneering chemical peel technology gained recognition quickly in the medical community and acceptance in dermatology education. Her work is cited in numerous medical textbooks including The Manual of Chemical Peels by Mark Rubin, M.D.; Cosmetic Dermatology by Leslie Baumann, M.D.; and The Non-Surgical Facelift Book by Michael Byun, M.D., John Mendelsohn, M.D., and William Truswell, M.D. “She was one of the first people to try and create new products based on the science of the ingredients in the cosmeceutical field,” says Rubin. “In addition, she believed strongly in educating her consumers and trained them in the use of her products and techniques.”

Margaret also gained a loyal following among plastic surgeons and her fellow aestheticians, becoming a sought-after speaker. She lectured in Asia, Europe, and Latin America and became a regularly-featured speaker at major medical, scientific, and aesthetic industry conferences across the U.S., including American Academy of Dermatology, American Academy of Facial Plastic and Reconstructive Surgery, American Society of Plastic and Reconstructive Surgery Nurses, American Society of Plastic Surgeons, International Congress of Esthetics and Spa, and the International Esthetics, Cosmetics and Spa Conference. Margaret’s expertise generated media attention as well, and she authored numerous articles and guest columns in more than two dozen national medical journals, beauty trade publications, and consumer magazines.

To Margaret, Physician’s Choice of Arizona was more than a line of proprietary peel formulations and daily care products. The company gave her a platform from which to educate medical professionals and aestheticians on skin function and how to enhance skin health through the safe and proper use of chemical peels and home care products. Professional education became her hallmark, and the company expanded a new education division to meet the surging demand for her knowledge. Margaret developed a comprehensive training program for her highly competent team of educators. They traveled around the country educating physicians, nurses, and clinical aestheticians.

As the company grew and evolved, so did the name. In 2004, Physician’s Choice of Arizona, Inc., celebrated its 15-year anniversary with the unveiling of a new corporate name – PCA Advanced Skin Care Systems. The new corporate identity was chosen to embody the company’s growing global presence and to unify brand recognition. Along with the new name came a streamlined logo in black and white. “The company had evolved significantly since we opened our doors in 1990,” says Margaret. “Our product offerings went from seven to more than 50 professional and daily care products.”

Under Margaret’s thoughtful leadership, PCA earned a reputation internally as a family-friendly company. Many of the employees in the predominantly female company started their professional careers with PCA. Representing the company at trade shows, medical conferences, and seminars, gave the PCA team an opportunity to forge new professional relationships and visit exciting cities around the globe. Empowering women has always been important to Margaret. Along with advancing the careers of her employees, she sought out community programs aimed at providing women outside the company with physical, emotional, and financial well-being. To date, Margaret has donated close to $500,000 in funds and in-kind support to local and national charities specifically supporting women.

On a national level, Margaret became a founding sponsor of Face-to-Face: Domestic Violence Project started in 1994 by the American Academy of Facial Plastic and Reconstructive Surgery (AAFPRS). This pro bono service reconstructs the faces of women scarred or disfigured by domestic violence. Margaret pledged $150,000 to this cause, hosted fundraisers on its behalf, and actively enlisted physicians’ services. Since the project began, more than 2,500 survivors of domestic abuse have been helped.

Ann Holton, director of development and humanitarian programs at The Educational and Research Foundation for the American Academy of Facial Plastic and Reconstructive Surgery (AAFPRS Foundation) has high praise for Margaret’s generosity. “I have the opportunity to work with many CEOs and corporations that wish to support our various programs. They offer assistance for a year or two. They are eager for publicity and then they move on to more ‘glamorous’ causes other than domestic violence,” says Holton. “Margaret is a different type of CEO and ran a different type of company. She gets involved, she stays involved, and the only time she finds herself in the spotlight is when her voice can assist survivors of domestic violence who are unable to speak for themselves. Her commitment is to survivors of domestic violence. Individuals who have healed inside, yet still have the scars outside.”

“The AAFPRS Foundation stands out among medical specialties as the most caring and concerned, and its domestic violence project raises awareness of this longstanding problem,” says Margaret. “We at the AAFPRS Foundation,” responds Holton, “could easily reply that Margaret is the one that stands out among CEOs as the most caring and concerned, and she has been the advocate to so many women that could not find their own voice.”

Margaret has been equally committed to championing the issue of domestic violence in her own community. Since 2003, she has opened her hand and her heart to the Sojourner Center, the largest domestic violence shelter in Arizona and the U.S. PCA employees donated thousands of dollars worth of household items and hundreds of hours of service at the shelter’s nursery and thrift store. Margaret also established an annual educational grant for shelter residents pursuing a career in health care. To date, Margaret has awarded four scholarships totaling $10,000. One of the recipients completed her education and is now a homeowner earning a respectable salary.

For her unwavering commitment, Margaret was invited to join the Board of Sojourner Center and served for two years. “Over the years, the women and children benefited from Margaret’s generosity on so many levels,” says Connie Phillips, MSW, executive director of the Sojourner Center. “She was a major donor to our $12 million capital campaign to build apartments for families as they are leaving shelter. She also arranged for the donation of a shade structure to cover the playground so that the children would be protected from the damaging rays of the sun. Margaret promoted the Center through her business and networking, drawing attention to our needs, and bringing resources to us.”

“Margaret is a true example of what is possible,” says Phillips. “She never let her circumstances limit her dreams. She believes in the potential of every person, and she is especially aware of the strength that many women carry inside themselves. Those who follow her example can learn to embrace their strengths and make the most of them. They can also learn to approach life from a place of joy and gratitude. I count it a privilege to know Margaret.”

Margaret again was ready to elevate the company to a new level. In 2006, PCA Advanced Skin Care Systems announced that Dr. Jennifer Linder, a board-certified dermatologist, fellowship-trained Mohs skin cancer surgeon, bioengineer and chemist would move her private practice from San Francisco to Scottsdale to join PCA as chief scientific officer. Margaret welcomed the alliance and believed that Linder's exceptional scientific credentials along with her commitment to clinical skin care were in complete alignment with PCA's ongoing mission. Linder and her husband, Richard Linder, invested in the company later that year. PCA took another step forward toward global expansion and evolved into PCA SKIN, part of a larger health care company, Physicians Care Alliance, LLC, owned by the Linders.

While Margaret still serves as an advisor and a spokesperson for the company, she has, in true entrepreneurial style, found a way to turn travel and spa-hopping into a business. In 2007, she and a friend launched www.spacritiques.com, a web-based consumer guide to the good, bad, and ugly sides of the spa industry. “We have created a place where consumers can go and find no-nonsense facts about where they should be spending their hard-earned money when selecting a spa,” says Margaret. The two have traveled to Europe, Asia, Canada, Mexico, and throughout the U.S., visiting spas incognito as customers and then posting their findings on the website. The site also offers an extensive glossary of spa treatments, a blog, and an area where consumers can post reviews about their own experiences.

Currently much of her time is spent in Texas with her daughter, Rebecca, and six-year-old granddaughter Gianna. Margaret’s passions for travel, spas, and home design keep her on the road often, but she wouldn’t have it any other way. It feeds her creative spirit and curious mind. Those who have watched her journey and been touched by her kindness and generosity say she is more than deserving of this life well-lived and hard-won.