Linda Palumbo- A Legend in Aesthetics 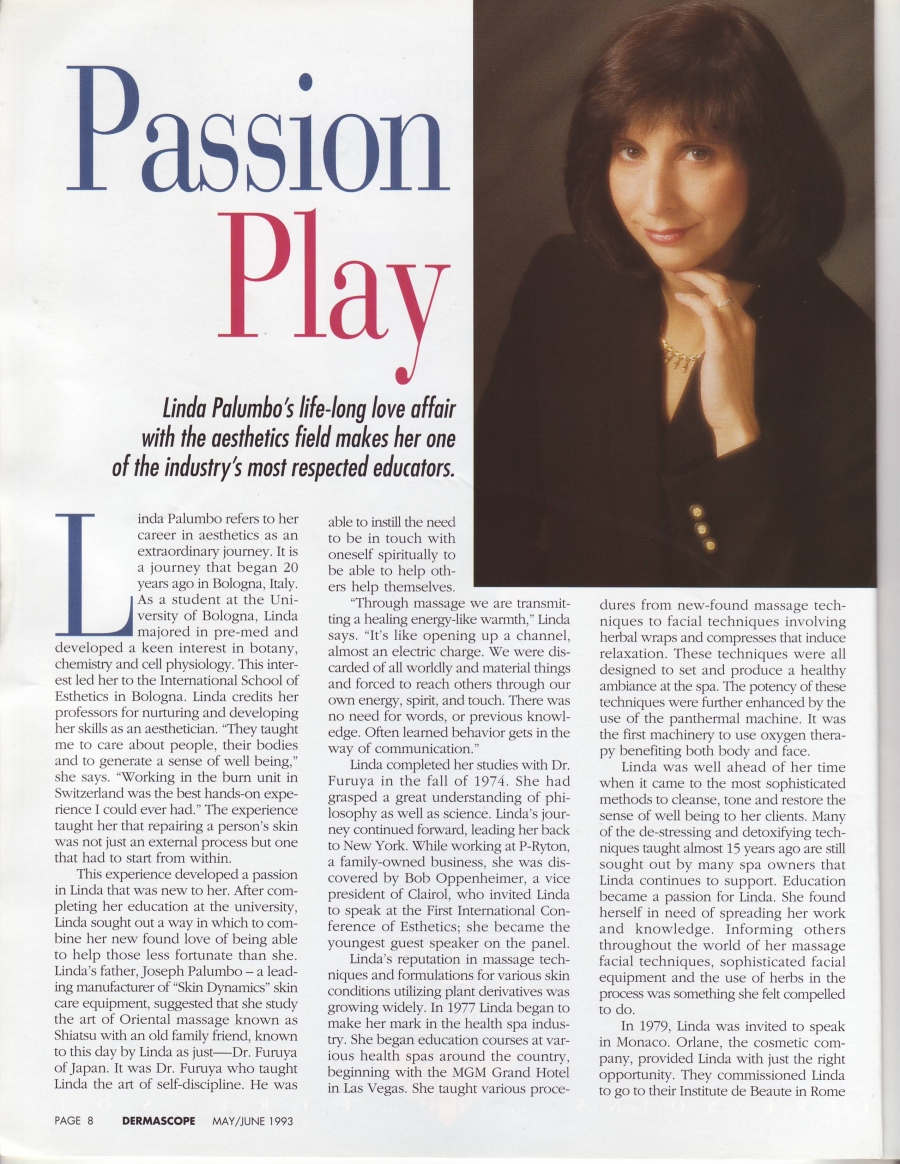 Linda Palumbo’s life-long love affair with the aesthetics field makes her one of the industry’s most respected educators.

Linda Palumbo refers to her career in aesthetics as an extraordinary journey.  It is a journey that began 20 years ago in Bologna, Italy.  As a student at the University of Bologna, Lina majored in pre-med and developed a keen interest in botany, chemistry and cell physiology.  This interest led her to the International School of Esthetics in Bologna.  Linda credits her professors for nurturing and developing her skills and aesthetician. “They taught me to care about people, their bodies and to generate a sense of well being,” she says. “Working in the burn unit in Switzerland was the best hands-on experience I could ever had.” the experience taught her that repairing a person’s skin was not just an external process but one that had to start from within.

The experience developed a passion in Linda that was new to her.  After completing her education at the university, Linda sought out a way tin which to combine her new found love of being able to help those less fortunate than she.  Linda’s father, Joseph Palumbo - a leading manufacturer of “Skin Dynamics” skin care equipment, suggested that she study the art of Oriental massage known as Shiatsu with an old family friend, known to this day by Linda as just -- Dr. Furuya of Japan.  It was Dr. Furuya who taught Linda the art of self-discipline.  He was able to instill the need to be in touch with oneself spiritually to be able to help others help themselves.

“Through massage we are transmitting healing energy-like warmth,” Linda says.  “It’s like opening up a channel, almost an electric charge.  We were discarded of all worldly and material things and forced to reach others through out own energy, spirit, and touch.  There was no need for words, or precious knowledge.  Often learned behavior gets in the way of communication.”

Linda completed her studies with Dr. Furuya in the fall of 1974.  She had grasped a great understanding of philosophy as well as science.  Linda’s journey continued forwards, leading her back to New York.  While working at P-Ryton, a family owned business, she was discovered by Bob Oppenheimer, a vice president of Clairol, who invited Linda to speak at the First International Conference of Esthetics; she became the youngest guest speaker on the panel.

Linda’s reputation in massage techniques and formulations for various skin conditions utilizing plant derivatives was growing widely.  In 1977 Linda began to make her mark in the health spa industry.  She began education courses at various health spas around the country, beginning with the MGM Grand Hotel in Las Vegas.  She taught various procedures from new-found massage techniques to facial techniques involving herbal wraps and compresses that induced relaxation.  These techniques ere all designed to set and produce a healthy ambiance at the spa.  The potency of these techniques were further enhanced by the use of the pan thermal machine.  It was the first machinery to use oxygen therapy benefiting both body and face.

Linda was well ahead of her time when it came to the most sophisticated methods to cleanse tone and restore the sense of well being to her clients.  Many of the de-stressing and detoxifying techniques taught almost 15 years ago are still sought out by many spa owners that Linda continues to support.  Education became a passion for Linda.  She found herself in need of spreading her work and knowledge.  Informing others throughout the world of her massage facial techniques, sophisticated facial equipment and the use of herbs in the process was something she felt compelled to do.

In 1979, Linda was invited to speak in Monaco. Orlane, the cosmetic company, provided Linda with just the right opportunity.  They commissioned Linda to go their Institute de Beaute in Rome to educate their staff on an anti-aging treatment using electrical equipment and massage.

Linda had no idea that the greatest education was going to be for herself.  Going into the monastery of Todi, a suburb of Rome, she was awed by the command of natural medicine these men were preaching.  Linda could not seem to pull away from the monastery.  She learned how to use plants to alleviate certain facial and body conditions.  Linda was then detoured back to New York due to family commitments, and she found leaving the monastery was difficult.

Linda recuperated by immersing herself in the Adrien Arpel organization.  “Adrien was an inspiration for me,” Linda says.  “Her sense of business was invaluable.  She had the foresight to know that the use of an aesthetician would envelop the cosmetics industry I time.  She was able to bring the concept of facials within reach of every person consumed by their well being.”  These services could be experienced by everyone.  The idea that facial and massage should not be an exclusive service was a revolutionary one.

By the 1980s Linda’s career took an interesting turn.  She left Adrien Arpel to focus on her marriage and family.  She continued to teach courses for P-Ryton, where she taught many top educators in the field, but her heart and mind were mostly with husband Michael Martucci, a pharmaceutical chemist, and daughters, Marisa and Laura.  Since that time Linda and Michael have had a son, Michael Joseph.

By the mid 1980s Linda was being feverishly wooed by Estee Lauder International.  They wanted Linda to develop a promotional skin care cabine.  Linda succumbed to the pressure, and her passion for the industry was revived.  Linda became a working mother.

She found it difficult, yet fulfilling on a professional level to travel all over the world and teach facial procedures, massage techniques as well as to develop training manuals and videos that are still utilized in the industry.  Linda continued on this impossible path until the memorable day at the IBS show in New York in 1986, where fate brought her to the attention of Horst Rechelbacher, owner and founder of Aveda Corporation.  Aveda, an environmentally conscious skin care and hair care products company, utilizes plants and herbs in product development.

“I believe body, heart and mind in the products and the philosophy of the company,” Linda says.  “Horst is truly a man ahead of his time.”  He had the conviction and foresight to create an organic product line inkle any other in the world.  Six years later Linda is still going strong at Aveda, developing an educational curriculum for skin care that is used by more than 20,000 Aveda affiliates throughout the country.  Lina currently is the east coast educator for Aveda.