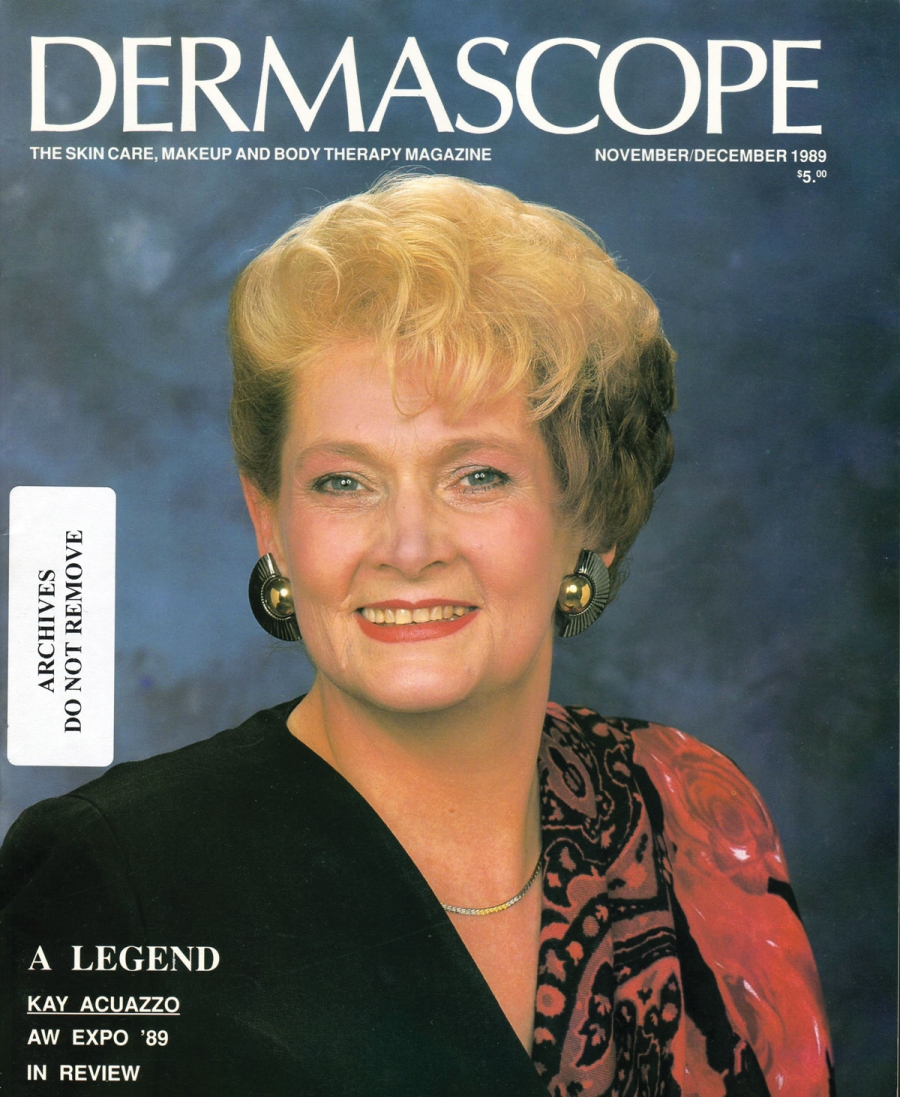 Europeans have long known the importance of proper skin care.  In the beauty centers of France, Italy, England and Germany, research and product development have been going on for years.  So has the training of ski-care professionals.

Philadelphia’s skin and body-care pioneer, Kay Acuazzo, realized early in her career that America needed to embrace this same European philosophy.  But, before that could happen, America cosmetologists would have to become more informed and better educated. This was to become Kay Acuazzo’s mission.

Beginning her career in dance, not skin care, Kay spent fourteen ears dancing professionally here and abroad.  She eventually opens her own dance studio in Philadelphia.  Though unbeknown to her at the time, these early years as an entertainer made Kay keenly aware of the skin and how certain environmental factors such as strong lighting, theatrical makeup, smoke and perspiration can affect it.  Years later this knowledge would steer her into the field of esthetics.

Marriage to Paul Acuazzo, who then had fifteen years of experience as a stylist, first introduced Kay to the field of cosmetology.  Her interest continued to grow when in 1968they bought a salon and Key entered the service.  “My husband was short two employees, so I went into take care of the desk.  I like it so much I decided to go to beauty school.”  And that cosmetology license was just the beginning.

After graduation, Kay’s theatrical experiences returned to her.  “I remember red seeing what all the makeup did to the skin.  I understood the damage it did.  So I decided to do makeup in the salon, and that’s when I realized I needed to do even more for clients in the area of skin care.” With her course set-- the problem became where to go to learn.

Kay first studied in New Jersey, later earning a certificate, but still feeling she’d only touched the surface.  “After meeting a lot of Europeans through the Skin Care Association of America, it was clear that there was so much knowledge in Europe that had to be brought have here.” There was no one else in Philadelphia trained in European skin treatments, so Kay decided she should be the one to go abroad the study.

In 1972, leaving her three children and husband at home, Kay spent three months in Italy where she learned all she could about skin care.  The trip was followed by many others to Belgium, France, West Germany, Great Britain and Spain.  Each time she learned more about the European concepts of skin and body care than before.  Like some travelers who collect spoons, Kay collected certificates, and the wealth of knowledge that went with them.

Today, Kay holds an Advanced Teacher’s Certificate from the Eve Taylor Institute of Aromatherapy in England, one from Wilanger in Austria in Manual Lymph Drainage, and another from the Phytomer Training Center in St. Malo, France.  She has also earned a Certificate of Esthetics from Sculoa International di Esthetics in Italy, and certification as an educator and distributor for Dr. Babor Natural Cosmetics Company in West Germany.  IN 1984 Kay received the most prestigious award for achievement in the skin-care industry -- a C.I.D.E.S.C.O. International Diploma.

Kay, however, did not stop when she had got enough knowledge to better serve her own salon clientele.  She set out to see that America’s cosmetologists could receive professional skin-care education here in the Unites States.

One way to issuer this was to organize and operate associations for skin-care professionals.  Mrs. Acuazzo served as national president of the Skin Care Association of America from 1980 to 1984, and has been this group’s board chairperson for its last two years.  Under her leadership in S.C.A.A., eight regional sections were developed and three skin-care conventions organized.  One of the sections was the only total-body seminar in the Unites States held in a spa facility.  Additionally, Kay helped establish the Federation of Esthetics.

When the S.C.A.A. and F.A.E. became a part of Esthetic America, a sub-group of the National Cosmetology Association, Kay began working to further this organization and has been the National Makeup Director for the N.C.A. from 1986 to 1988.  And a year ago Mr. Acuazzo helped found another professional group, the American Aromatherapy Association, and now sits on its board.

Another way Kay has helped to further the cause of skin-care education was to set-up a training center.  In 1985 she founded Esthe-Tec, where advanced education and free product training could be offered.  Esthe-Tec now offers a variety of classes.  These classes cover such topics as aromatherapy, advanced esthetics, herbal peeling, body treatments, touch awareness, acne treatments, makeup and massage. A lot of training seminars are conducted by Mrs. Acuazzo, although Esthe-Tec also hosts a variety of guest educators.  Many of these educators are from Europe, and they share their techniques and methods.

As Kay has been devoted to her goal of upgrading the aesthetics training in America, she is equally committed to the spa/salon she shares with her husband and family.

Always on the cutting edge, the Acuazzo operate a state-of-the-art day spa and salon, complete with the most modern European equipment.  Extensive remodeling on a quaint townhouse in the heart of Philadelphia has created the kind of place Kay has always dreamed of.  A pastel décor, soft lighting, and peaceful surroundings make it the ultimate in day spas.

Located on South 20th street, next to the city’s affluent Rittenhouse Square area, each of the building’s four levels contain a different treatment center.  On the first floor, hair, nail and makeup services are provided under the capable management of Kay’s husband, Paul, and their daughter Stephanie, a hairstylist.

One floor up, the second level houses, a variety of European styled treatment rooms, where skin-care and massage services are provided.  Five aestheticians are available for individualized treatment programs, and the Spa’s body therapist offer a wide range of massages from Swedish massage, reflexology and aromatherapy, to lymphatic drainage, shiatsu and sports massage.  Designed by Kay for total relaxation, the second floor’s peaceful, private setting enhances all the treatments given there.

Located on the third level is a nutrition center.  It is evidence of the Spa philosophy that beauty and well- being need a holistic approach-- the inner body as well as the outer body needs to be taken care of.  Conducted by Kay’s daughter, Kathy a registered dietitian and body therapist, clients can receive help with weight loss, the development of healthy eating programs and other nutrition-related concerns, as well as toning and anti-cellulite programs.  “Offering nutritional services is definitely a growing trend for spa/salons,” says Kay, and I’m glad we can offer clients another avenue for sensible weight control.”

The top floor is where the Spa stands out miles about the rest.  Lever four contains a French hydrotherapy tub, one of only five in the United States that is used to give a variety of body treatments using seaweed and seawater products and appropriate essentials.  Treatments are further enhanced by the tub’s 120 jets, which give a relaxing underwater massage.  Next door is an Italian pan thermal unit, the only one of its kind in Philadelphia.  Individualized full body facials are given in this capsulated unit, using the finest professional products and techniques available.  Also on the fourth floor is a room for body-wrap treatments, an invigoration Swiss shower, and a relaxation room, for sound and inhalation therapy.  Level four offers many of the same special treatments available at America’s famous spa resorts.

The Spa at Paul and Kay’s is unequalled to any in the Philadelphia area, and fortunately this tradition of excellence will continue for many years to come.  This is because Paul and Kay’s three daughters are all versed in separate areas and are a part of the business. By pooling their resources and sharing the work load, operating, a first-class spa/salon is made easier.  Having her daughters join the business was a surprise.  “I never thought our girls would go into this business,” says Kay, “but I’m happy they have made this choice.  Together we can all be a part of the future of the beauty industry.”

Being recognized authority in her field has given Kay a chance to meet many actors and performers who have come to her spa services while in Philadelphia.  Brook Shields and President George Bush are just two of the any celebrities who have visited Paul and Kay’s.

Her career has also given her the opportunity to study at some of the world’s finest school, under the industry’s most knowledgeable professionals.  Early contact with such experts as makeup artist Stan Pace helped shape Kay’s career and solidify her commitment to quality skin care.

But certainly her work is not completed.  At 55, despite the demands of a forty to eighty-hour week she oversees Esthe-Tec’s product distribution, lectures, and her client schedule at The Spa.  She also teaches classes.  Kay still retains a contagious enthusiasm for her field.  Not that education is more available she believes it is more important than ever to be as informed as possible and to keep pace with new developments.  Kay takes her own advice and continues to add new products and methods to her treatments.  She will never quit learning, growing and perfecting her craft.

Evidence of this can be seen in Kay’s most recent endeavors.  Natural herbal peeling is an area that Mr. Acuazzo is getting heavily involved with.  One of six regional distributors of Dr. Christine Shrammek’s product, Kay is working hard to make this treatment a part of skin-care regimens in salons throughout the Northeast.  Through specialized training seminars, Kay is sharing her knowledge and experience with this professional product that works similarly to chemical peels and dermabrasion, but without the use of potentially harmful chemicals.  Kay is also actively promoting this treatment to a public who have had skin imperfections, but are leery of the peeling techniques used in a physician’s office.

Another of Kay’s new areas of concern is spa consolations.  She is putting her experience to use giving spa and spa/salon operators the information they need, whether they are just starting our or are expanding their operations.  Experienced in running her own state-of -the-art spa, Kay is available to help with designing, equipment selection and installation, product usage, and staff training.  Just recently Kay had the fun of helping The Woods At Killington Spa Resort in Bermount as they set up their new spa.  Mrs. Acuazzo helped them get off right start in operating a successful spa business, as she has done for others in the industry.

The future will always hold new challenges for Kay. “I would like to see estheticians, dermatologist and plastic surgeons working in conjunction with one another, utilizing the skills of each professional.”  She also feels the need for better licensing and accredited esthetics schools.  And as the baby boom generation reaches middle age, she sees a need to help educate and care for a population that wants to age gracefully.

Kay has come a long way during her 25-year career, and her early mission, to see that American cosmetologists became more informed and better educated, has become reality.  Those in the industry can be glad that many years ago she went to work in her husband’s salon “just to help out”  We can be grateful she had the foresight to predict that skin care would become more and more important, and that she prepared herself and the industry for this day.  No loner is Europe the only place to find the best beauty centers.  Now the United States has something better to offer -- what Kay calls “European concepts done the American way!”