Ilona of Hungary - A Legend in Aesthetics 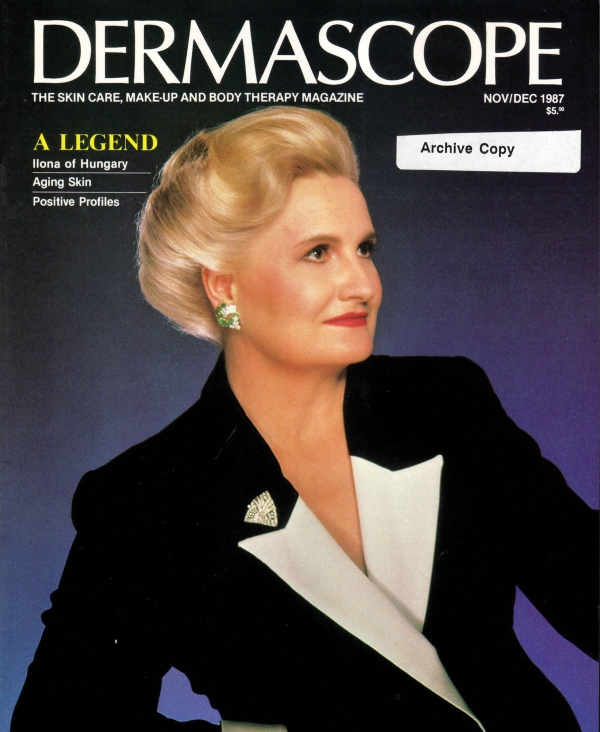 Ilona of Hungary- A Legend in Aesthetics

Madame Ilona was born in Rabakecol, a small town near the Austrian border.  She was educated in Budapest by her mother’s sister, with whom she lived from the age of seven.  Ilona was always fascinated by beauty, and began her lifelong study of skin care while still in her teens.

In 1956, along with millions of others her life was disrupted by the Hungarian Uprising.  Ilona was one of thirty thousand Hungarians who sought freedom; from a refugee camp in Austria, she came to the United States, a lifelong dream.  She had exactly thirty-three cents when shrived in America-- and, she says, she still has a few of those pennies left.

At first, the dream of America was not matched by the reality: she found work in a handbag factory, pounding leather into suppleness.  She spoke no English, but studied incessantly, taking a more difficult job as a waitress because it forced her to learn to communicate faster and more clearly.  She studied for and received her American licenses.

In 1957, she met and married George Meszaros, and for several years devoted herself to being a full-time mother.  In 1966, when Meszaros began operating a hairdressing salon in Chatham, New Jersey, Ilona used one room for skin care.  In 1971, when they relocated in Denver, she and Maszaros decided to concentrate on her side of the business.  Their success came almost immediately: thanks to Ilona’s skills as a skin care specialist and Meszaros’ business administration), Ilona of Hungary today has salons in six cities and a thriving mail order business offering hundreds and hundreds of products.

Business startup is no simple task, she advises.  Funding, cooperative suppliers, research, staffing, educating, and informing the public are essentials.  “I’m a perfectionist and total professional.” Not only do clients benefit from such exacting standards, but so do dermatologists and plastic surgeons that frequently consult or refer appropriate patients confidently.

She rate being a woman as advantageous, believing that hard work, drive, determination, learning from failure, and willingness to see opportunity even in menial jobs are step  up the ladder. “I don’t believe in luck.”

“I’m a workaholic,” the sharp-witted, tall, vivacious blonde answers laughingly when asked the secret of blending business with two grown children, grandchildren, travel, entertainment, and interviews.  Does she have a hobby? “My work is my hobby.  Nothing makes me happier than helping people with their skin problems.  Their smiling faces as improvement shows- - that’s MY hobby.” She enjoys readying, mostly biographies, and swimming- - although, she is quick to note, “only after the sun goes down.”  She lectured at Denver University, and adores gardening and delights when an Eastern species bursts into bloom in Denver’s tough climate.  Ilona, whose own skin is the best advertisement for her techniques, lives in a whirlwind of activity.  She is constantly flying between her salons to ensure that the high quality her clients have grown to expect is maintained.  She has compiled her TEN COMMANDMENTS FOR BUSINESS SUCCESS. They are as follows:

Hard work assures success.  Getting to the top is far easier than staying there.  And the top is a lonely place only because most who reach it slide off.

HISTORY AND ORGANIZATION OF THE INSTITUES

In the mid-1960’s, George Meszaros had a small hairdressing salon in Chatham, New Jersey; Ilona attended to skin care in one room of the shop, where she practiced techniques she had learned in Budapest, London, Austria and Germany.  Madame Ilona began attracting a larger and larger band of dedicated clients, so much so that, when he relocated to Denver in 1971 for health reasons, Maszaros decided to concentrate on her side of the business.

Ilona of Hungary was an immediate success in Denver; today, the city is the site of their corporate headquarters in a four-story office building they bought in 1975.  Expansion to other cities was inevitable: Houston (1978), New York (1980), Chicago (1984), Dallas (1986), and Palm Springs (1987).  In several locations, the Institutes of Skin Care operate from buildings owned by the company, including a four-story establishment on Park Avenue in New York.

The Institutes are not franchises; each operates under Ilona’s close supervision.  She and Meszaros have consistently declined offers to expand from their current sic locations (in early 1987, such offers have come from New York, Washington, Detroit, Palm Beach, and the Bahamas), fearing that with additional salons, they would be unable to maintain the rigid quality control upon which they insist.  “This is more than our business,”  says Meszaros.  “It’s our family, our name.  We have worked this hard building it up, we wouldn’t want to take a chance on someone who might not give out clients what they’ve learned they can expect from us.”

Accordingly, Madame Ilona and Meszaros spend most of their time on the road, with Ilona estimating that she has not been home for seven consecutive days in the past six months.  She is a firm believer in the use of the surprise inspection as a method of maintaining standards: managers of her salons have learned to be prepared for an unannounced visit at literally any moment.

Ilona also oversees an exhaustive training program for everyone on her staff.  All prospective employees must first licensed by that State Board of Cosmetology.  More to the point, what-every their previous experience, all must undergo a rigorous training program that can last up to five weeks of seven-day-a week sessions.   For maximum effect, Madame Ilona never trains employees in groups of more than five.

Meszaros uses the metaphor of musicians to describe the purpose of their training program: “A musician can be the complete master of his instrument, but when he joins a new orchestra he will still have to learn new music and to work in harmony with a new conductor.  That harmony is what he has to teach.”

Currently, the Institutes employ 70-80 full time staffers.  Employees tend to be European, largely because the science of skin care that underlies Ilona’s techniques is almost never taught in the U.S. “In Colorado, for instance, any licensed hairdresser has 1,650 hours of training, of which 175 teach about skin care.  He can go right from that to calling himself a skin care specialist.  Even if he COULD study the proper techniques, there’s no incentive for him to do so.”

The architecture and design of the six Institutes, like the treatments offered within, have close ties to the medical world.  Although elegantly appointed, the quarters are, Meszaros stresses, highly utilitarian- - in most of the Institutes, the floors are linoleum, not carpet, to better maintain the necessary level of cleanliness.  Clients are treated in individual soundproofed rooms to cut down on distraction.

The services offered in the six institutes are the same from city to city, with minor variations: in Palm Springs, the treatment is primarily facial, while other cities offered head-to-toe care, including manicure, pedicure and full body massage.  An indication of the esteem in which Ilona’s clients hold her came in late 1986; when the will of a wealthy New York woman was read, it was discovered that she had left her best friend the remainder of her partially used year’s worth of treatments.

Madame Ilona considers one of her functions to be educative: she and her staff give clients detailed advice on skin care.  She is tireless in her warnings about the dangers of sun chine.  Although her new sun blockers have a sun-protective factor of 20+, the highest available, she still urges all clients to take the sun sparingly, if at all.

Although Ilona stresses that best results are obtained under the direct supervision of her staff in one of the Institutes, in recent years her techniques and products have been made available to the general public through a highly successful mail order business.

The product line is always changing, but as of early 1987, Ilona offered more than thirty items for skin care alone, including several specially formulated for use with oily, blemished or dry skin.  Ilona of Hungary markets shampoos and conditioners for the hair; lotions, soaps and bath oils for the body; and a line of nail care products that include polish in more than three dozen shades.  Finally, makeup items sold by mail or at the Institutes, and several booklets prepared by Madame Ilona herself detailing skin care techniques which can be used at home.

ILONA OF HUNGARY:  A FAMILY BUSINESS

As stated previously, Ilona and Meszaros refuse to license franchises for fear that a less conscientious operator might not live up to the company name.  in the case of Ilona of Hungary, the company is the family.  Apart from Madame Ilona herself, who deals with the formulation of products and the development of new techniques, and George Meszaros, who sees to the business operations of the company, there are two other family members currently involved with Ilona of Hungary.  Their eldest daughter, also named Ilona, works in the Denver headquarters, as confidential assistant to both of her parents.  And Robert, their eldest son, is a recent business school graduate who is, Madame Ilona says, learning the business from the bottom up.

Ilona of Hungary has come a long way from that terror-filled night when she fled her native Hungary taking her uniquely European, science-oriented skin care education and professional training to a new life.

FANIÉ International’s unique products began with the dedication of Florence Johnson. She was the owner and operator of a California… Read More

Yahui Bio is dedicated to improving the way you look and feel with inner and outer beauty products. We have… Read More

We offer an inspiring learning environment for students who want to pursue a career in the beauty industry. We encourage… Read More
How to resolve AdBlock issue?
X