It has been called the “miracle plant” and the “silent healer,” and it has been used throughout history to heal bodily ailments as well as repair damaged cells. What is this magical plant? Aloe Barbadensis, or aloe vera as it is commonly known. Part of the lily family, aloe is actually a succulent, though it is commonly thought of as a cactus, because of the thorny ridges that surround its soft leaf. Its gel is also so much more than just a burn soother. In fact, it plays a very important role in skin care.

A History of Aloe

Aloe has quite a storied history. Research has linked it to ancient Egyptians who used it as a preservative for embalming mummies, but also as an herbal remedy for preventing tuberculosis and other respiratory infections. Pharmacological usage dates back to ancient Samaria when in approximately 1750 B.C. it was used to treat stomach irritations and nausea. Nearly one thousand years later Europeans began using it in their herbal-based medicines
as well.
In terms of skin care, the Egyptians and Chinese used aloe vera to treat burns and heal wounds. Native Americans revered it as "The Wand of Heaven,” believing anyone touched by aloe would be cured of any skin disorders. Ancient legend also links aloe to Cleopatra, who used it as part of her regimen for beautiful skin.
"In our part of the world, aloe was introduced in the late 1500's by Spanish padres when the missions were established in Texas and California," said Ivan E. Danhof, Ph.D., M.D. "In Mexico, aloe has been used for a variety of skin and internal problems for over 500 years. Evidence continues to be accrued confirming the safety and efficacy of properly produced aloe products."

The Healing Power of Aloe

Dr. Danhof, also known as “The Father of Aloe,” has conducted extensive research on this amazing plant and its ability to remedy countless bodily ailments. He has noted aloe for its ability to reduce the effects of diabetes, asthma, epilepsy, osteoarthritis, various digestive problems, and ulcers, as well as reduce cholesterol and triglyceride levels, and increase circulation.
Topically, aloe has proven useful in alleviating burns, sunburns, certain allergic reactions, and dry skin. This is mainly because the pH of aloe closely mirrors that of the human skin. Since aloe has anti-allergy and anti-inflammatory properties, thanks to its glycoprotein content, it is also effective in treating poison ivy and similar reactions. 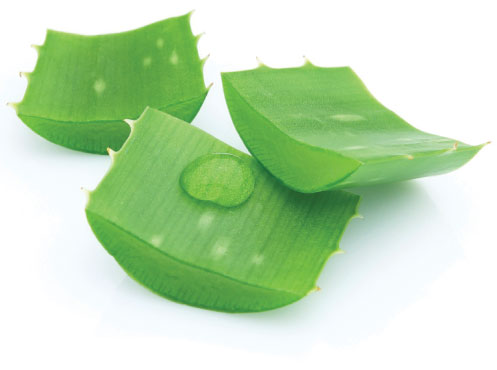 When it comes to wound healing, aloe helps accelerate the process by stimulating fibroblasts and epidermal cells for growth and repair via the growth factors found in its mucilage. The healing process is also aided by the fact that aloe gel works almost like “crazy glue,” sealing the wound to retain moisture. With all of these benefits, think how powerful it is in the treatment room.

Aloe vera has been used as an ingredient in skin care for ages. It is most commonly known for its soothing and moisturizing properties, but is also a promising age-reversal agent and protector against ultraviolet damage. Through testing, we have discovered that while aloe is effective on its own, when combined with other active ingredients like bisabolol (L-Alpha) or humectants like sodium hyaluronate, moisture barrier, nutrient absorption into the skin, and elasticity is proliferated.
Aloe can be used in the treatment room to quickly calm inflamed, irritated skin. It is highly beneficial following peel treatments, waxing procedures, AHA exfoliations, and any other treatments that induce sensitivities or unexpected allergic reactions. It also has a natural ability to protect against trans-epidermal water loss.
As an age-reversal ingredient, the mucilage in aloe, which contains growth factors, works to stimulate fibroblasts, and the synthesis of collagen and elastin fibers. It has also been shown to inhibit tyrosinase activity which reduces and prevents melanin, or aging spots. This process is slow, however, when aloe is used alone. Combined with other age-inhibiting and age-reversal ingredients, results will be seen more rapidly.
Aloe truly is a “miracle plant” with centuries of proven results to back it up. How are you integrating this powerful ingredient into your treatment room?

Rhonda Allison, a pioneer in the skin care industry, is the founder and CEO of Rhonda Allison Clinical Enterprises, as well as an author and internationally known speaker with more than 30 years aesthetic experience.