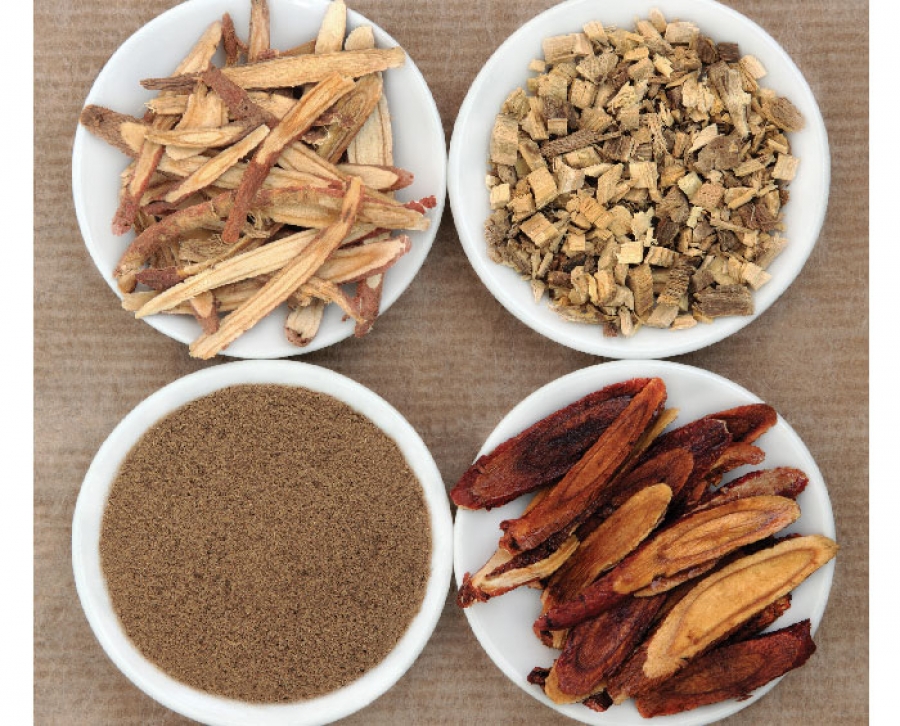 Most people know licorice for its use in candies or its distinctive tastiness in tobacco. The level of sweetness found in licorice root is said to be long-lasting and at least 50 times sweeter than sugar. Although licorice is synonymous with sweetness, skin care professionals should go beyond flavor and examine its medicinal purposes. Licorice root has been used for centuries as an alternative medicine for many aliments due to its pure healing effects. There have been many therapeutic compounds found in the licorice plant and root. It is the most widely singly used herb for medicinal purposes. Licorice root has a long list of impressive uses: it can be taken orally for medical illnesses, combined with other herbs, or used topically for skin care and beauty products.

PARTS OF THE PLANT
The root is the most valuable component of the licorice plant because of an active substance called glycyrrhizin. The plant's root, which is at least 25 percent of its weight, holds a significant amount of flavonoids and glycyrrhizin, which contain healing properties. The extraction of glycyrrhizin acid has been used to treat a host of illnesses, such as ulcers, stomach problems, and digestive issues. The root-like stem grows horizontally and is stoloniferious because it spreads by growing new plants. The main root of the plant can grow about six feet in length and is about one-to-five centimeters thick; it is made up of a strong root system called taproot. Deeper roots allow the plant to access water underground in drier climates.

Runners are the roots closer to the ground; they send out a network of rhizomes that erect above ground. The rhizomes' fibrous interior is wood-appearing, hard, and yellowish-brown in color. Licorice root has the ability to acquire nitrogen because of it symbiotic relationship with bacteria known as rhizobium, which helps the plant grow efficiently and is a great source for other plants to use nearby. Nitrogen is a major component for plant life. Licorice offers numerous unique purposes for humans and plant life. The harvest of licorice takes about two-to-four years after it is planted in subtropical climates. 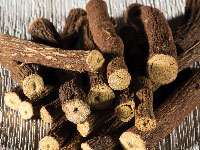 Licorice root is cultivated for its medicinal purposes and flavoring it may have a negative effect if used over a long period of time. Glycyrrhizin acid can interfere with the adrenal function, causing major health problems. However, removing the glycyrrhizin is just as effective and safe to use. Licorice has been known to boost the immune system, fight viruses, and relieve stress.

ORIGIN, DESCRIPTION, AND SPECIES
The licorice plant is native to the Southern Mediterranean region and parts of Asia. While it is sometimes spelled liquorice, its scientific name is Glycyrrhiza glabra, which is derived from the Greek word glukos; rhiza, which means root; and the Latin word glabra, which means smooth (in reference to it pods). The herbaceous plant belongs to the legume family and its shrubs are three-to-five feet with pinnate leaves of lilac flowers that are about six inches long. It also has elliptical leaflets that grow in a group of oblong clusters. The inflorescence of bluish-purple pea flowers, which resemble pods, contain seeds that are supported by its main branch. 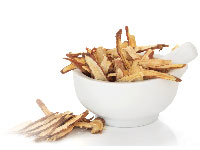 There are over 20 species of Glycyrrhiza, but the oldest species G. glabra and G. uralensis have a history of attributes. Botanist Pedanius Dioscorides, who was also a Greek physician and pharmacologist employed as a medic for the Roman army, advised the army of Alexander the Great to chew licorice root to allay their thirst during long marches for stamina. The army chewed too much of the sweet root, adversely turning their teeth black. In Chinese tradition, licorice root was imported as a medicinal to prolong life and as a healing aid to treat medical illnesses. The popular subspecies, Glycyrrhiza uralensis is found in parts of China and has proven healing powers. The Chinese used the roots of both G. glabra and G. uralensis to reduce toxicity in many ingredients used in Chinese prescriptions. The herb is found in mostly all Chinese herbal blends because of its gastronomic absorption and ability to balance the herbal blend. The licorice root is used in tandem with other herbs for remedies as a guide drug to improve the flavor and enhance its effectiveness.

Over the years, where the climate is favorable, licorice has experienced rapid growth in the United States because of its valuable properties and commercial recognition. There is only one licorice species grown in America, Glycyrrhiza lepidota. Unlike its original species, G. glabra, and subspecies, G. uralensis, the effectiveness of G. lepidota is unknown. Researchers have documented that licorice root is an extensively used medical plant, however, its leaves are known to be antimicrobial. When used in other forms – such as liquids, gels, and powders – licorice is extremely versatile. No matter the form, the potency is still available, unless the glychrrhiza acid is removed. Licorice root is rich in vitamins, such as B-complex, and proteins. Aside from glychrrhiza, licorice root contains several compounds of flavonoids and coumarins that have outstanding benefits. Flavonoids are a rich source of antioxidants and have anti-inflammatory properties. Another great compound that has proven to be beneficial as an antiviral is triterpenoids. Phytoestrogens found in licorice plants have been useful to manage and aid hormonal problems, especially in pre-menstrual women and menopausal women. According to herbalists, licorice root is the most used plant for medicinal purposes and is proven to be the most effective.

HISTORICAL USES
Over a span of more than 3,000 years, licorice uses have changed. Due to its ability to heal, licorice had an honorable history amongst the pharaohs and prophets in ancient times. Early Egyptians used licorice in a tea concoction called Mai-sus. The sweet, pungent plant was widely used in Egypt as a candy; the sweet root was chewed as a treat. Consuming licorice root as a tea helps alleviate pain and fatigue. It is said that a well-preserved dried supply of licorice root was found inside of Tutankhamen's tomb. The glycyrrhizin acid found in licorice root is proven to boost the immune system and suppresses bacteria. Taken by mouth, it helps cure various digestive complaints and viruses. For gastrointestinal, stomach, and respiratory issues, the demulcent acts as expectorant to reduce phlegm. In ancient times, it is believed that licorice root kept many people healthy.

SKIN CARE USES
Licorice has shown sufficient cultural, medicinal, and holistic benefits for curing various digestive complaints and viruses. These same benefits have been seen in relation to curing problematic skin and moisturization. Licorice root extract can be used to address many skin care problems and treatments. It can be used as a lightening agent, as well as an anti-aging solution. When used as a gel, licorice root can help with skin irritations and dermatitis. It has been added to skin care products for a variety of uses for problematic skin. The wonders of licorice are astonishing, but the extraordinary role of the flowering plants for skin care is just as impressive.

Licorice plant is effective when used in combination with other ingredients and herbs; this usage of the plant has spread throughout the industry. It is great as a moisturizer, anti-aging agent, whitener, and antioxidant. The licochalcone is the molecule contained in the root extract that helps cure skin problems. Licorice root extract has been said to act like a shield protecting the skin against harmful UVA/UVB rays. When used with alpha and beta hydroxy acids, licorice root has reduced dark spots. Licorice has shown sufficient cultural, medicinal, and holistic benefits to help cure various ailments. Because licorice has so many valuable uses, it takes form of many different things; its antimicrobial, antiviral, and anti-inflammatory properties have gained popularity in the skin care and beauty industries. Licorice root containing glycyrrhizin acid should not be used for a long period of time internally or externally due to its side effects. Clients should avoid using the root if they are pregnant or have heart, liver, or kidney issues. As a demulcent (soothing herb), licorice root works as a natural remedy for ulcers; it protects against ulcerative disorders. Research also shows that antiviral compound, triterpenoids, found in licorice root can help treat hepatitis, HIV, and influenza. Topically, licorice can soothe pain; it is considered antispasmodic. Licorice is a powerful antioxidant that protects the skin against environmental pollutants. It also prevents bacteria and helps balance oils. It also reduces fatigued skin and diminishes dark spots and circles.

Cole Patterson has been a licensed aesthetician for over 20 years. She has extensive knowledge in medical dermatology and makeup artistry specializing in men's skin care and grooming. She has graced the faces of some of Hollywood's most famous actors, entertainers, and professional athletes. Patterson works in the film and television industry behind the scenes as creative director and makeup artist. She is the owner of Cole Skincare for Men in Los Angeles, California. Patterson launches her new campaign for Coles Skincare for Men leading up to the 3rd Annual ESPYS Grooming Lounge for ESPYS 2017.

Published in Resources
Login to post comments
back to top
How to resolve AdBlock issue?
X