A New Concept in Cellulite Etiology and Treatment 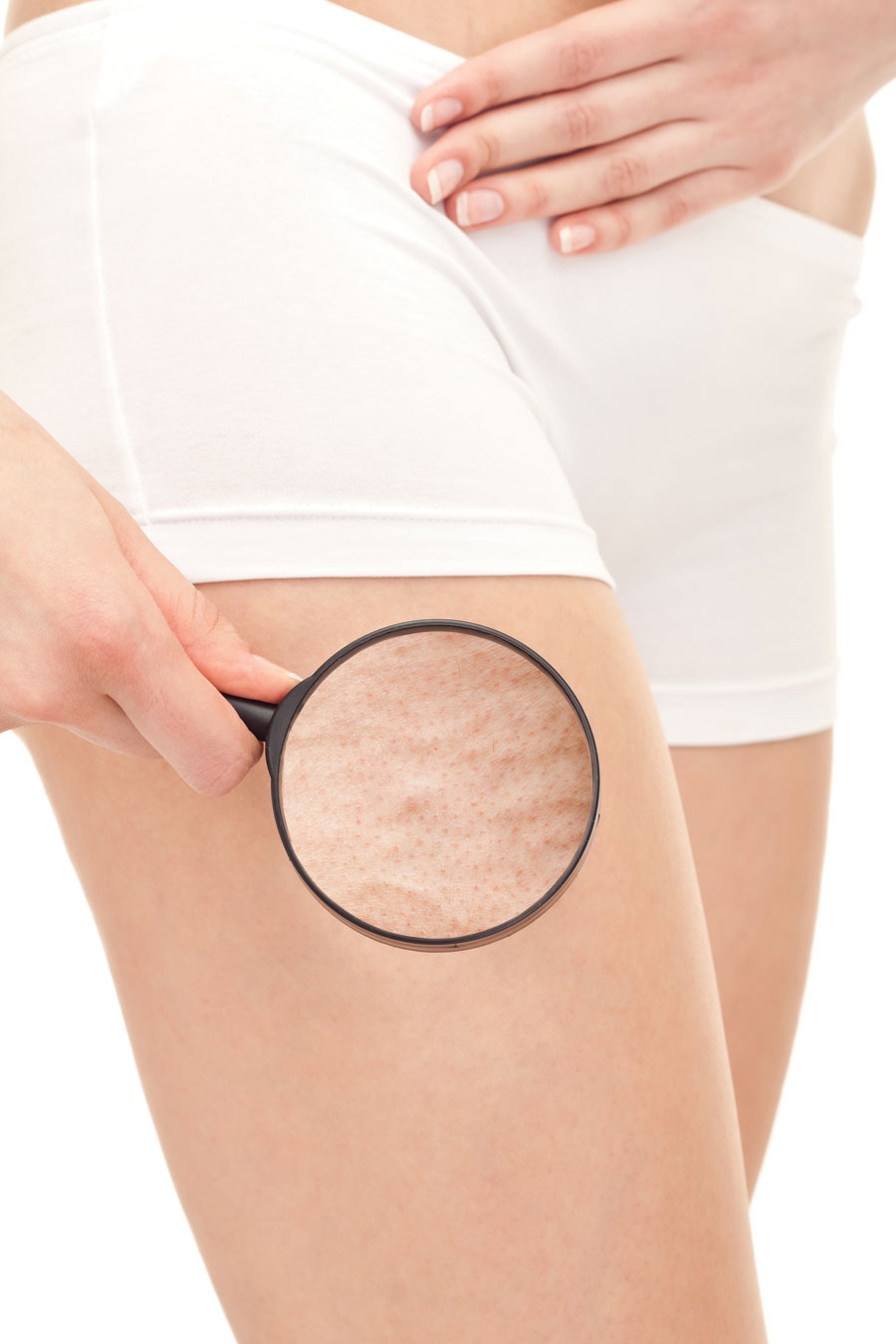 For many years cellulite was considered to be a disorder of fatty tissue. It was frequently attributed to anatomical variations in fat distribution between men and women. A host of other causes were suggested, including excessive amount of both intracellular and intercellular fluids and faulty lymphatic drainage. Here are the facts as we know them today. So-called cellulite is a condition seen only in women. It is characterized by a disorder of the connective tissue that retains the adipose tissue in compartments in the subcutaneous portion of the skin, that is, in the layer above the muscles and below the dermis.

Clinically, it is manifested by a combination of dimpling and protrusion of the skin, an undulating surface that makes the skin appear wavy.

What is the cause of this condition? One of the significant causes is the presence of estrogen, which is related to the phenomenon of the menstrual cycle. Each month the endometrium, or inner lining of the uterus, proliferates to make ready for a potential pregnancy. It is necessary, in order to embed fertilized egg into the uterus, that a succulent, well-nourished bedding is available. The structure is composed essentially of collagen fibers and blood vessels. In the absence of a pregnancy, the endometrium is no longer needed. The body will get rid of it and the woman has a menstrual period. To achieve this destruction, an enzyme, known as collagenase, is produced by fibroblasts. Partly under the influence of estrogen, collagenase will take the collagen apart and recycle fragments. However, the collagenase is not specific to uterine collagen alone. It will wander through the bloodstream and attack any type of collagen that it happens to get near. The buttocks and thighs become a major target. Why?
The fat in the buttocks and thighs is a special kind of fat. It is not a different fat chemically, but it contains receptors that inhibit its utilization except in times of pregnancy. This is a key concept! No matter how much a woman diets or exercises, this fat will not be mobilized, as it is stored away safely for the nourishment of a potential infant.
How does this new concept tie into therapy of cellulite? First, it tells you that all the mechanical means such as rolling, heating, compression, liposuction and mesotherapy are ineffective, as they have nothing to do with the etiology of cellulite. Some of these treatments are potentially dangerous. The destruction of the collagen that makes up the compartments containing fat causes the fat globules to alter their position in the subcutaneous tissue. Since the dermis is less resistant than the muscle tissue, the fat moves upward. Some areas of the collagen remain intact and are fastened to the upper dermal structures, resulting in bands that create valleys in the undulating surface skin.

So, what is the best therapy for cellulite? It starts with understanding the cause.

First, you must inhibit the action of estrogen on the fibroblast receptor. This can be accomplished with a phytoestrogen such as genistein, which is derived from soybeans and has one thousand times less estrogenic activity then natural estradiol, which is the predominant estrogen in the body. The second thing is to inhibit the action of collagenase on the dermal collagen. An effective agent is the group of bioflavonoids available from grape seed extract or pine tree extract. Commercially available pycnogenol is one of the most effective when used at one and a half percent in a topical product. The third thing is to metabolize the displaced fat to allow the restructuring of the collagen bands in the subcutaneous tissue, known as trabeculae. There are several effective agents, one of which is a plant extract derived from Coleus forskolii, known as coloneol. The extract is effective from one half to one percent. Coleus forskolii stimulates an enzyme known as lipase, which breaks up the triglycerides that make up the fatty globules. An additional effective ingredient that mobilizes fat is theophylline.
Theophylline is a member of the xanthine family of plant extracts. It inhibits a specific enzyme known as phosphodiesterase, often called PDE for short. The action of PDE is to modify the conversion of adenosine triphosphate (ATP) to cyclic adenosine monophosphate (cAMP or cyclic AMP), which is critical to the activation of the enzyme lipase. This sounds rather complicated, but it really is not, if you look at it in another way. ATP must supply the phosphorus to activate the enzyme lipase, and it does this by forming cyclic AMP. The PDE prevents this reaction, but in the presence of theophylline, the action of PDE is markedly reduced, allowing for lipase to be activated by cAMP.
Once you have mobilized fat from triglycerides, free fatty acids will be formed. The body will burn these fats into carbon dioxide, water and energy in the mitochondria. To get them into the mitochondria requires a compound known as carnitine. This compound acts as the shuttle to carry two carbon segments of the fatty acids into the mitochondria, to be metabolized by the Krebs cycle and the electron transport system. These are the essential ingredients that make up a rational approach to controlling cellulite.
Keep in mind that this is an estrogen-driven disorder. It cannot be cured, but with our current knowledge, it can be effectively treated. I suggest one further addition to the topical treatment, and that is wearing support pantyhose during the day. The compression from the hosiery will increase venous and lymphatic flow, which will greatly aid the effect of topically applied products. It is also helpful to avoid constricting the flow of venous blood back to the body. Avoid wearing bikini underwear with tight elastic or tight blue jeans. To a large measure, these two garments will undo much of what you are applying to get rid of cellulite.

Peter T. Pugliese, M.D. has been the undisputed pioneer of cosmetic research, formulation and education in the field of skin health. He has spent more than 50 years dedicating his life to research and science. His research in the field of anti-aging and skin physiology has given him numerous awards, patent, and discoveries which have influenced the course of professional skin care around the globe. Pugliese has contributed chapters to over a dozen books and published over 60 scientific papers. He has authored four books, including, in 1990, the first textbook written for aestheticians by a physician, Advanced Professional Skin Care, to bridge aesthetics and medicine with a common language. His newest publication is Advanced Professional Skin Care – Medical Edition.