Antimicrobial Peptides: Addressing Microflora and the Microbiome to Treat Acne 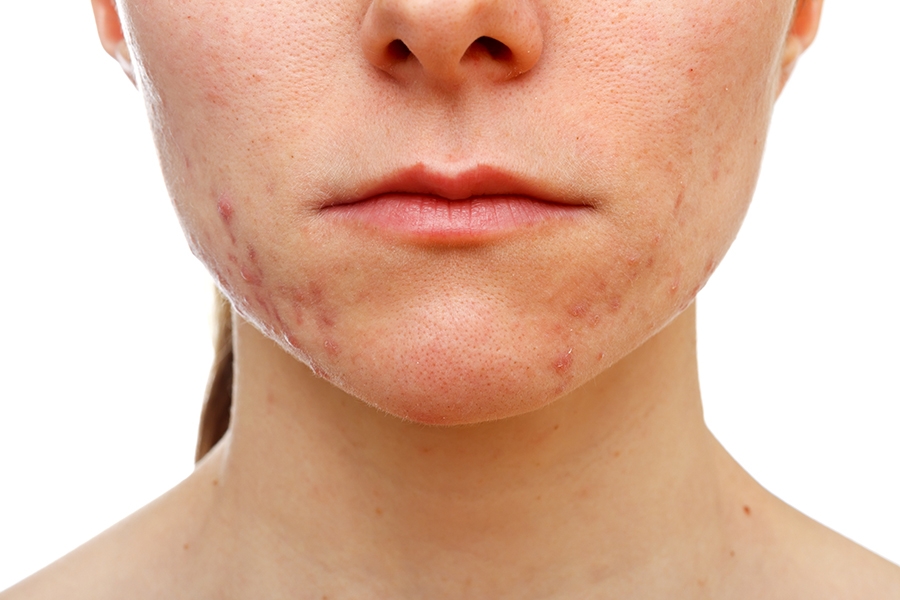 The skin is considered to be its own ecosystem that includes bacteria, fungi, and viruses. This system plays a crucial role in the balancing of pathogenic (bad) bacteria, as well as protecting the commensal (good) bacteria. This article will explore types of skin bacteria and their role in the skin’s microflora and microbiome systems, as well as examine how antimicrobial peptides play a superior role in successfully treating acne.

Let’s begin with an overview of the formation and causes of acne.  Acne is a disorder of the pilosebaceous unit, which consists of the hair and its follicle, the arrector pili muscles and the sebaceous gland. What causes this disorder? The dead cells (corneocytes and keratinocytes) shed into the hair follicle instead of desquamating to the stratum corneum. This causes a buildup and

eventually forms a plug, blocking oxygen from entering the pore, creating an anaerobic environment. Bacteria thrives in this anaerobic environment. The dead keratinocytes combined with sebum and other cellular fluids also create a food source for this bacterium, as well as a protection against the immune system. Propionibacterium (P.acnes) then migrates and proliferates under the plug creating a pustule and inflammation. Sebaceous glands are connected to the hair follicle and produce sebum which support growth by providing food to P.acnes bacteria. This type of bacteria is a common skin commensal bacterium. Bacteria is able to adhere to the sebum and promote colonization and growth.1 Hormonal influences are also known to increase sebaceous activity.

but even from one part of the body to another.

As the largest organ in the human body, the skin consists of many types of good and bad bacteria forming the microbiome. This microflora and microbiome protect from many foreign invaders and toxic substances. According to the authors of The Skin Microbiome, “microorganisms (viruses, bacteria, and fungi) and mites cover the surface of the skin and reside deep in the hair and glands. On the surface, bacteria, such as proteobacteria and staphylococcus form communities that are deeply intertwined among themselves and other microorganisms.” All of these microorganisms collectively form the microflora.

Bacteria can be classified into two major groups: gram-negative and gram-positive. Gram-negative bacteria are found to be resistant to antibiotics, whereas gram-positive bacteria are more reactive to this treatment. Many skin care companies are jumping into the microbiome popularity bandwagon by producing ingredients that attempt to restore the skin’s microflora. One such ingredient is black bee honey-derived and fermented with zymomonas mobilis bacteria, intended to stabilize and promote the skin’s microbiome.3

Bacteria grows in strength and numbers by communicating with one another using chemical signal molecules. This entails producing, releasing, detecting, and responding to small hormone-like molecules termed autoinducers. This process is called quorum sensing. The bacteria population increases in numbers and strength as it produces density within the cell.2

How do peptides work with quorum sensing? Antimicrobial peptides (AMPs) are peptides that are able to destroy or disrupt the growth of bacteria. Peptides are able to trick bacteria into thinking that proliferation (multiplication) is unnecessary. Therefore, interrupting the quorum signaling and growth. A quorum is the minimum number of bacteria present that is necessary to meet a threshold. Once the threshold or quorum is reached, the bacteria colonies know they have proper supplies and population to multiply.

Antimicrobial peptides are effective in modulating quorum signaling. The purpose of the peptide is to interfere with the message of the bacterial colonies’ communication when a quorum has been obtained. The confusion prevents the quorum from being reached and, in turn, prevents bacteria from dividing and multiplying as quickly as initially intended because it does not have the proper supplies or support present to survive. By interrupting these signals, peptides confuse bacteria to hold off on growth, as the bacteria now perceives the environment as hostile due to a lack of necessary quorum signal from surrounding “allies” (other bacteria). The body’s immune responses can then gain the upper hand in fighting the bacteria, destroying it naturally.

Other types of AMPs are designed to send signals to promote and support a healthy microflora and to prevent the over proliferation of bad bacteria while encouraging the growth of beneficial bacteria. AMPs are a novel, innovative approach in the treatment of acne.