Miki Giunta- A Legend in Aesthetics 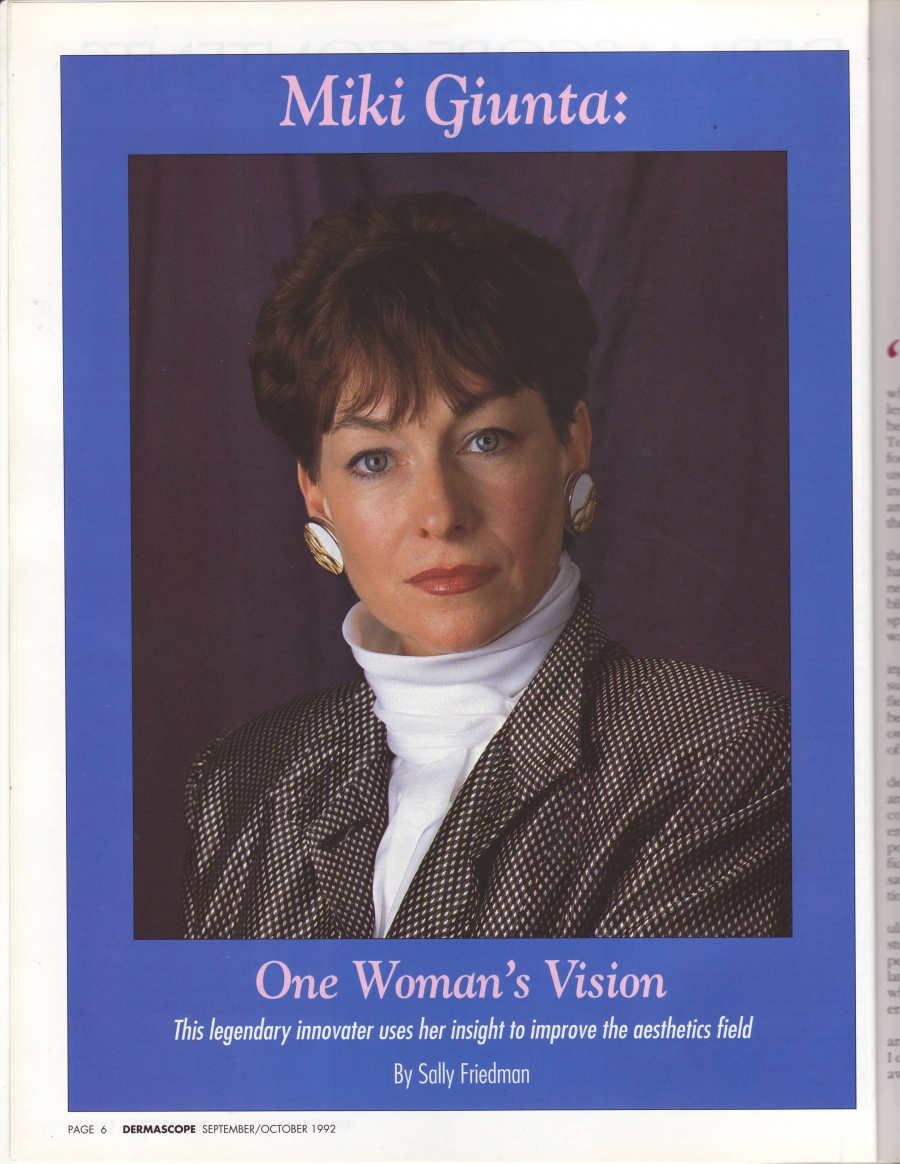 Miki Giunta- A Legend in Aesthetics

One Woman’s Vision -This Legendary innovator uses her insight to improve the aesthetics field.

Growing up in New Jersey, Miki Giunta spent countless hours with her Irish grandmother, listening to stories of the old county and watching as she planted and puttered in the family garden.

“My grandmother taught me a great deal about the natural world,” recalls Miki, who has never forgotten those early lessons.  “She believed in nature as a healer and a provider.”

Today, the internationally known founder of Spa Health Consultants has used her grandmother’s teachings and inspiration, along with intensive study and innovation, to influence the aesthetics industry.

Ironically, even as Miki has given the aesthetics field enormous vision; she has quietly battled a condition that has nearly robbed her of her sight.  Legally blind, this industry leader is willing to speak about her handicap.  In its own way, her loss of sight was also a gain.

The third of four children of working parents, Miki had already begun pursuing an education in the cosmetology field by age 16. “I was always geared to being a wife and having a family of my own, so I married at 18 with high hopes of happily-ever-after,” she says.

It was not to be.  While she was delighted with her son and daughter and devoting herself to motherhood and community service, Miki’s marriage ended in divorce, leaving her to support two young children. “It was a difficult transitional time for all of us,” she says.  “Like many women in that situation, I wondered what I would do.”

At about the same time, during a regular eye examination, Miki received a stunning blow: a brain tumor was suspected.  Nine months and endless tests late, it was almost a relief to learn that what she has was an inoperable, degenerative vision disorder.

“Living with the idea of a tumor or an aneurysm was so terrifying that I felt I could deal with anything else.  The only awful thing was that nobody could tell me when and how my condition would progress.

But something remarkable happened as she faced her crisis.  “A whole new level of understanding opened up for me.  I had always been fascinated by skin and had been studying and researching skin types.  But now, I could pretend my eyes didn’t exist at all, and I could examine and analyze skin by touch alone.”

Skin analysis, an area in which Miki is an acknowledged pioneer, led this courageous single mom into the next chapter of her life.

Committed to the notion that there was more skin care than what we were looking at on the surface, she blazed a trail for others to follow.

“As I studied, I began to write manuals and then to teach others.  I became fascinated with the fact that surface conditions were linked to internal root causes, a concept that I believe has begun a change in our industry,” says Miki.  “I sought different definitions, new explanations of oil content, water content and circulation.  Now its being used across the country, but back in the early 1970’s, this was a revolutionary theory!”

For nearly a decade, through her manuals and teaching, Miki spread the word at a time when it was finally being eagerly sought and accepted.  As her vision failed, she learned to use her hands for exploration, adapting a kind of Braille for the skin.  She was able to define key characteristics with in-depth descriptions for others who could see properly.  By the end of the 70s, this soft spoken, gentle crusader was ready for her next challenge.

Successful as a Businesswomen

Instead of working for others as she had been doing, the visually impaired but unstoppable Miki decided to take the plunge and strike out on her own.

“I selected the best products I could find, including the traditional milks, masques and creams along with holistic products I had discovered.  I had no fancy office -- the children’s playroom in my home was my headquarters,” she recalls.

Miki began calling on salons to offer demonstrations.  Experiencing is believing, and she knew it.  Hardly the stereotypical hard sell sales type, Miki rarely missed making a sale.  Once salon owners experienced her treatments first hand, they were convinced.  The more she studied, the more committed Miki became to holistic approaches not just to skin, but to the increasingly beleaguered human body.

With a partner, Dan Fryda, who shared her vision of bringing a holistic view to the aesthetics market, she started Spa Health Consultants Incorporated in March 1982. All the years of travel abroad and self-motivated research in the medical libraries of Europe were coming in handy.  “I actually held the first aromatherapy seminar in America in 1974, and from that time on, I was convinced that this was the wave of the future.  I studied the healing, curative therapies of the European spas, and I realized that those marvelous treatments were exactly what American spas were missing.”

The moment in aesthetics history had come for what Miki had conceptualized -- and named -- the day spa.  And while there was no drum roll or trumpet blast to mark the moment, this innovator had coined not just a term, but an industry as well.  Under the banner of Systeme Avance Body Care, Spa Health Consultants introduced the widespread use of detoxification products and treatments to help eliminate stored toxins in the body.  The company revolutionized the approach to body fat by identifying different types and their characteristics, and to outline specific, targeted remedies, including seaweed treatments for each one.

How would America respond to these “revolutionary” notions?  According to Miki, all factors were in place.  Consumers were becoming very health-conscious, and they were ready to experiment with what their European counterparts had known all along.  Industry leaders were receptive as well.

Today, day spas have become the most popular trend to emerge in the health and beauty field.  For Miki Giunta, it has been a gratifying, exhausting, exhilarating and undeniably exciting era.  First with a partner, and now on her own, she has not only introduced the market’s first holistic line using algaes and essential oils; she has pioneered a movement that has altered the face of the aesthetics industry.

“Even in hard times, when they stop buying cars and expensive clothes, Americans like to be good to themselves.  Since the days of the two - week stays at an expensive spa are over for most of us, the day spa allows us to feel and look good quickly and affordably.”

Respected By Her Peers

Until now, few in the industry knew that pioneer Miki Giunta was waging her own private war even as she changed public attitudes about skin and body care, “I always worried that because of my failing eyesight, I would offend people who thought I was ignoring them when in reality, I wasn’t recognizing them,” Miki says

She is a warm, caring woman who may lack 20/20 eyesight, but who has incredible gifts of insight and visions.  “I feel fortunate.  I may have a physical disability, but I certainly have found fulfillment in my life.  I just want to go on doing what I have because in some small way, I like to think I have made other people’s lives better.”

We asked some industry leaders to comment on Miki Giunta’s role in advancing the health and beauty industry, and their statements speak for themselves:

Carol Walderman, president, Von Lee International School of Aesthetics, Baltimore, Md,: “Miki has been promoting body care and day spa services long before many salons throughout the country know what aesthetics were.  Her contribution to the industry has been most blamable, and we are grateful that she has had the patience to wait around for the rest of the beauty industry to catch up.  She definitely is an appreciated pioneer!”

Tamara Friedman, founder, Tamara Institute De Beaute, Farmington Hills, Mich.: “When it comes to Miki Giunta, I have nothing but the highest praise.  Miki is more interested in educating than in selling, and what I admire most about her is her commitment to get at root causes.  Twelve years ago, when nobody talked about body treatments, she did.  We owe her a lot.”

Diane Young, president, Diane Young Skin Care Center, New York: “She is one of the best in the business.  She is informed, she is talented, and a lot of us owe her a great debt for her work. Miki Giunta has given our industry professionalism and information and a whole lot more.”