Michael Grandel: A Legend in Aesthetics 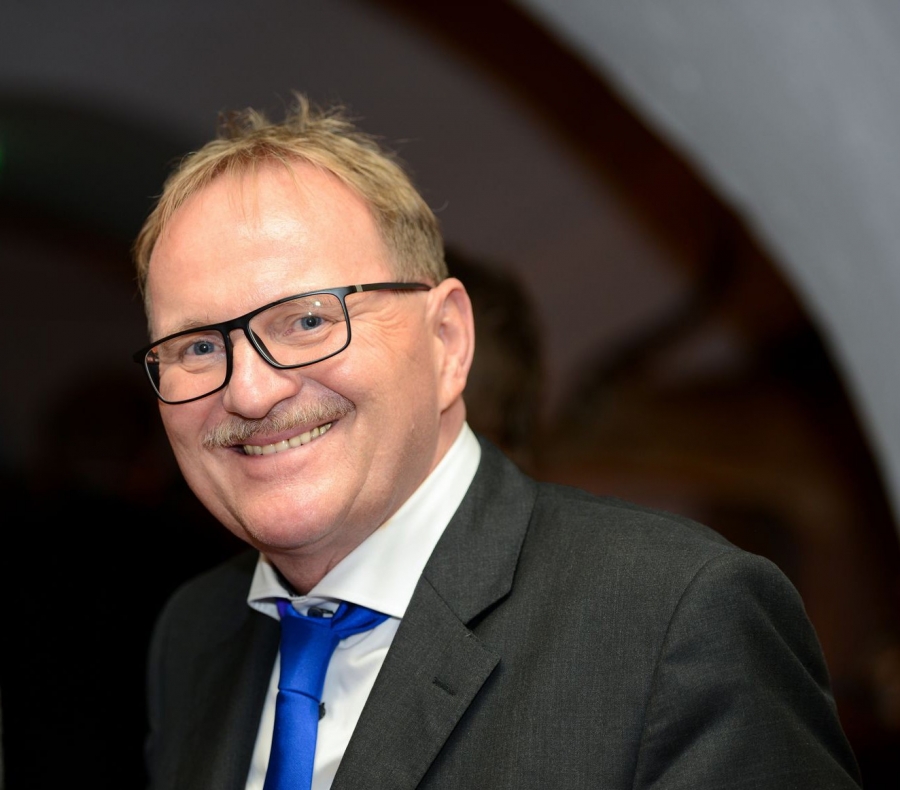 Mark Twain's fictional character Huckleberry Finn could have also been named Michael Grandel and the venues of his adventurous stories could have been set by the Lech and the Wertach, rather than the Mississippi. Concerning hair color and mischief, the young Grandel was in no way inferior to the fictional figure. However, in a move that greatly contrasts those of Huckleberry Finn, the present-day Grandel has succeeded in building up a reputation in many women's minds. His surname is internationally known and renowned in the aesthetics industry. Year after year, thousands of his jars and tube, which are produced in Augsburg, find their way into homes and cosmetic institutions all over the world.

A PASSION FOR BEAUTY FROM THE CRADLE

Michael Grandel was literally born into the world of beauty. His father, Felix, started to involve Grandel into research around the wheat germ at a very young age. Grandel smiles as he looks back on this time: “As a young boy, I used to wander through the Lech’s wetlands. During one of these trips, I had, once again, captured goods in the form of goldish shining blossoms of St John’s wort. As soon as I returned home, I pickled them into wheat-germ oil, which resulted in my very first self-made skin oil. Shortly after, I proudly presented the product to my parents.”

To this day, Grandel has not lost his passion and fascination for nature. Now and then, he still draws beauty secrets from nature, in conjunction with high-technology procedures. For Grandel, new active ingredients are as gripping and absorbing as crime novels are for those that love suspense. Therefore, he is always looking for new, effective substances to further increase the diversity of the beautiful world of aesthetics.

PLUNGING INTO THE DEEP END

In 1947, Dr. Felix Grandel founded Keimdiät GmbH at the original mill site in Augsburg, which he inherited from his mother. Keimdiät translates into English as “diet of wheat germ” and, as the name suggests, the young company’s first range of health products was based on wheat germ. In 1977, Michael Grandel’s studies in economics were interrupted by the sudden and unexpected death of his father: “Amidst my studies, I had to make a hard choice,” said Grandel, “Would I want to keep studying as planned or would I want to step into my father’s shoes so soon?” The young economist made his decision after the end of his studies in the year of 1979 and entered the family enterprise at the age of 25. In 1982, he was promoted and, only three years later, in 1985, he was appointed managing director. Being the sole manager allowed him the possibility to materialize his ideas of a modern company. Grandel jumped at the chance and restructured the business into DR. GRANDEL GmbH, founded a new center for production and logistics, and accelerated a new alignment as a service company and as a partner for aesthetic institutions. He managed to establish his father’s legacy as an internationally noted trendsetter for professional skin care made in Augsburg, Germany.

Today, all of the company strings are still pulled from the headquarters in Augsburg, including marketing and research and development. The warehouses and distribution and shipping offices are located in Augsburg. Moreover, there is a modern training facility for future aestheticians. Grandel, who is still pouring his heart and soul into his company, is in charge of the development of new products and oversees all of the in-progress projects. Every product leaving Augsburg carries the seal: “All products made by DR. GRANDEL are a fusion between approved and innovative substances together with high-tech procedures, which guarantee for optimal effect as well as best tolerance for the body.” Preferably, natural active ingredients are used, the environmental burden is kept as small as possible, and resources are taken care of. Economy and ecology are not in conflict, but rather in harmony.

As a man of marketing, Grandel is mindful of giving every product an explicit utility and value, as well as a precise placement. He strives to diverge from the existing concepts with his own philosophy: “The best thing to happen is to become unique and create something completely new and original,” says Grandel.

For DR. GRANDEL, the human being is always in focus; economy is not an end in itself, but rather a means to serve people and society as a whole. This concept is Michael Grandel’s inspiration and, with this attitude, he is motivating all of his employees. Corporate social responsibility is all about voluntary contributions to the economic system, as well as showing liability beyond the gates of the company: “Regarding environmental aspects, we always endeavor to focus on a holistic view and clever management to conserve resources and nature,” Grandel says. “We support OroVerde – The Tropical Forest Foundation – as well as GoGreen by DHL. Followed by that, all of our packages are shipped in a climate-friendly way, worldwide.”

Furthermore, DR. GRANDEL also actively contributes to society through cultural sponsoring – which currently supports the local ballet company, a partnership that matches perfectly with the DR. GRANDEL brand presentation:  “Cultural sponsoring assorts with our brands inner values – beauty and health converge like a zipper,” states Grandel. Robert Conn, director of Ballet Augsburg, confirms this statement. His dancing career started in Arkansas and New York, and, after several further stations, he finally landed in Augsburg’s theater in 2007. Besides many mutual projects, he was given the task of incarnating the values of DR. GRANDEL’s three brands into three breathtaking choreographies.

In general, values are an extraordinarily important topic for DR. GRANDEL and are, thereby, a crucial extract of the enterprise’s fundamentals, or basics. These fundamentals give all of the company’s employees a reliable reference and frame of order. The foundation of their values consists of integrity, reliance, responsibility, performance, and success and, together, correlate and form the basis of their path to collective prosperity.

Grandel has been running DR. GRANDEL for more than 35 years: “It’s the dynamics and the relatively huge room to maneuver that makes the beauty branch so exciting,” explains Grandel. “For me, as an economist, the marketing component of the business is a special challenge. I am driven by collecting achievements. It is a fantastic feeling to see our cosmetics and the concept, which is linked to it, being internationally successful. Moreover, it is very inspiring for me to actively encourage young associates in their careers, to promote them and their experience throughout, and then to witness their personal progress.”

Grandel finds that the beauty industry never gets boring or monotonous because it subsists on innovation and new concepts. Each of the three brands by DR. GRANDEL annually releases new products, assortments, promotions, and treatment concepts. Recently, the company repeatedly managed to establish trends like BEAUTY XPRESS or BEAUTYGEN by DR. GRANDEL, as well as the “New Look” colors by ARABESQUE, which have been awarded with the prized Readers’ Choice Beauty Forum Award for the most popular makeup brand for cosmeticians in Germany. In March 2014, Grandel was awarded A Life of Beauty at the Beauty International fair in Düsseldorf, Germany. Tradefair of Düsseldorf uses that award to honor personalities who earned great merits in the professional cosmetics scene.

After 37 years in business, Grandel has not lost any of his youthful curiosity and enthusiasm. When asked about the key factor to his success, he gives a humble response: “The human being is, and always will be, in center of my acting.” This simple and genuine truth has always been the creed of his family; it is a philosophy that has been carrying and shaping the family enterprise for almost 70 years.

Now, the family establishment is making a move into the third generation. Grandel’s daughter, Ariane, has earned recognition during her multiannual employments in the United States, Great Britain, France, Switzerland, and Austria. She is currently representing DR. GRANDEL’s banner internationally as training manager and is growing into her upcoming role as brand ambassador.

Grandel’s focus is on people. He enchants his employees and national and international partners with his passion for the industry. The DR. GRANDEL approach is based on treating all people – whether they are business partners or employees – with respect, at all times. Moreover, he has shown complete commitment in committees like the Chamber of Commerce in Augsburg and as chairman of the University Council at Hochschule Augsburg.

Grandel keeps raising the bar and always aims high. He consistently finds the strength and endurance to achieve his goals.

What is your long-term vision for DR. GRANDEL?

My vision for DR. GRANDEL is for the company to be the most attractive alliance offer for skin care professionals, spas, and clients.

What characteristics or skills set you apart from your peers and enabled you to be so successful?

I would call it a seventh sense for creativity. Besides that, I love to delight others with my ideas and, of course, I share my success with my whole team.

What adaptations have you made over the years to stay relevant in the industry?

What has surprised you most during your professional journey?

I am still surprised that sometimes you need to have a lot of patience to manage change processes, although the benefits are obvious.

How and when did you decide that your current career is the right one for you?

At least since I decided to study economics; it was definitely clear that I would become an entrepreneur.

How and where do you find inspiration?

I develop my best ideas when I am in close contact with nature, such as on walks through our wonderful Bavarian forests. My wife, theater, arts, and worldwide traveling are important inspiration boosters as well.

What are your hobbies when not working?

I love gardening, cycling, and activities with my family and friends.

What is the most important lesson you have learned from owning your own business?

This article was translated by Pierre Pudellek.