Luella Bailey- A Legend in Aesthetics 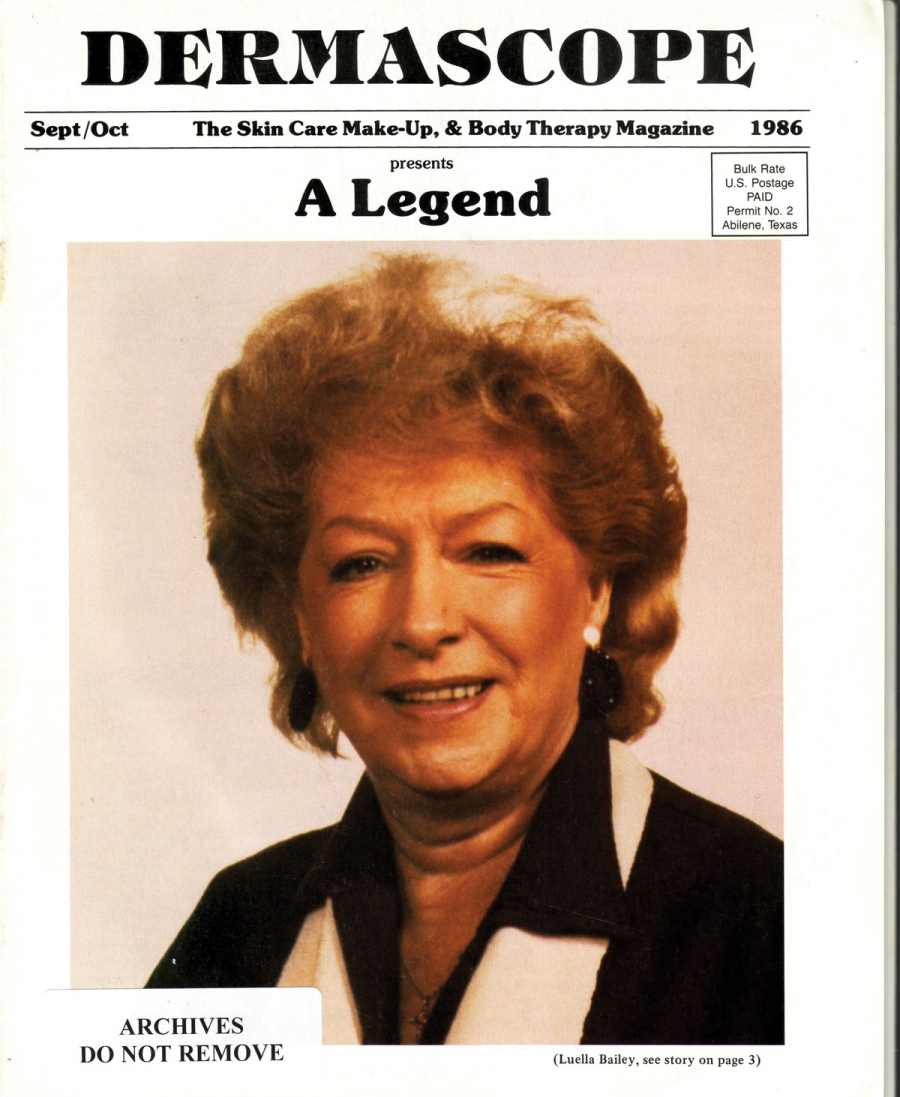 Luella Bailey- A Legend in Aesthetics

During her tenure as national Styles Director she has the good fortune to assist in hosting Mrs. Richard Nixon as guest of the fashion luncheon program when the convention was held in Washington D.C.  She was the guest of honor for the National Millinery Institute convention in New York at which meeting she blessed the “marriage of hats and hair”.  For over 30 years she has been a guest artist and guest lecturer for many organizations and state associations.  The National Association has recognized her by inducting her into the NCHA HALL OF RENOWN.

Luella has always been a futuristic thinker, the first to consider new ideas.  When it became evident that skin care had a great potential, she hastily suggested to the national association that skin care classes be included at the meetings.  Her schools in Florida were the first to include skin care training as part of the regular curriculum even though it was not required by the state.  This all took place in 198, 17 years ago.  She held the office President of the southeastern division of CIDESCO, USA from 1978 trough 1921.  She attended the international meeting of CIDESCO in Brighten England in 1978, and has participated in CIDESCO’s meetings in New York.

She has prepared skin care training seminars for the following:  The Midwest Beauty Trade Show in Chicago, state and affiliate shows, state teachers seminars, The Florida FCA and FHFC seminars, CEU seminars, and in Alabama she assisted the State Board of Cosmetology in setting up the first states to provide skin care training.  In New York, she did the filming of the first educational material on skin care released by NHCA.  Later in St. Louis, she did a follow-up on male skin care.

In the early days, when teaching skin care classes, the person in charge has to see that the equipment was secured set up for operation, secured at night and in many cases repacked for shipment at the close of the meeting.  This is not the case today since we have many more manufacturers in the industry who are willing to help.  For many years Christine Valmy gave great assistance.

Luella assisted Modern Salon Magazine in formulating their first skin care articles for the aesthetic profession.  She also did the technical work for American Hairdresser Magazine on “Programming Teenage Skin Care.”  She was influential in presenting esthetician training to the O.H.F.C of NCHA, now known as HairAmerica.  It was later decided that classes should be held at the annual and semi-annual meeting for the national membership.  This proved to be a valuable insight for NHCA.  Luella also recommended in 1978 that an esthetic section be considered within the OHFC.

Luella Bailey is chairman of the Florida Esthetics Section of NCA.  She has chaired this position since 1982, and has built this section from none to 35 by holding 4 seminars and 1 examination a year.  (25 more are to take the exam in September).  The written and practical for this exam was set up by Luella, including the master sheets, grading sheets, examiners sheets, time, programs, etc.  She based all of the procedures on HairAmerica systems and grading, with the help of Porter who set up the national procedures.  Many stats have contacted Luella for this procedure, both written and practical, as a format in setting up their own esthetic section.  She is very proud of the Florida Esthetic Section of NCA.

Both she and Porter also set up an initiation of a candlelight ceremony in conjunction with the FHFC initiation they are also in charge of.  It is a very impressive ceremony, to be held at the opening program.  The entire committee of the esthetic section march in mass to a reserved section.  The persons to be instated present themselves one at a time as their names are called, and they receive two pink candles.  One is lit by the state president from her gold candle representing the Florida Esthetic Section.  A commentary is read, they receive their diplomas and pins.  (The pins they buy, but they are given the diplomas)  The president then finalizes the ceremony by giving the initiated people the oath of leadership.  The music and lights go up, and they blow out their candles together.

Luella hopes this beautiful ceremony will eventually be adopted by all states.  A solemn ceremony such as this helps people be proud of their position as esthetic leaders in their country.

Luella has long been a leader where professionalism is concerned.  It is her opinion that too many people call themselves skin care specialists, and do not have the training or background in this field.  It appears that improvements are being made, but the progress is very slow.  With the advent of augmenting and combining the various segments of the skin care organizations into one group under the wing of NHCA in HairAmerica, there will be not only a powerful organization behind estheticians, but great leadership and good guidance.

Luella says, “Professionalism is not only a worldly attitude, it is giving unselfishly of oneself and with concern for others.  As professionals, we have a responsibility to the public, not only for estheticians to conduct themselves as professionals, but to continue to educate themselves, and others in the profession so that the entire industry will progress.  Individually, we can do little- - but together, we can accomplish a great deal.  Today, we are great....tomorrow we will be even greater.”

A special note of recognition from Dermascope to Luella who will have been a cosmetician for 50 years in January, 1987.  Congratulations Luella Bailey.