Linda Seidel- A Legend in Aesthetics 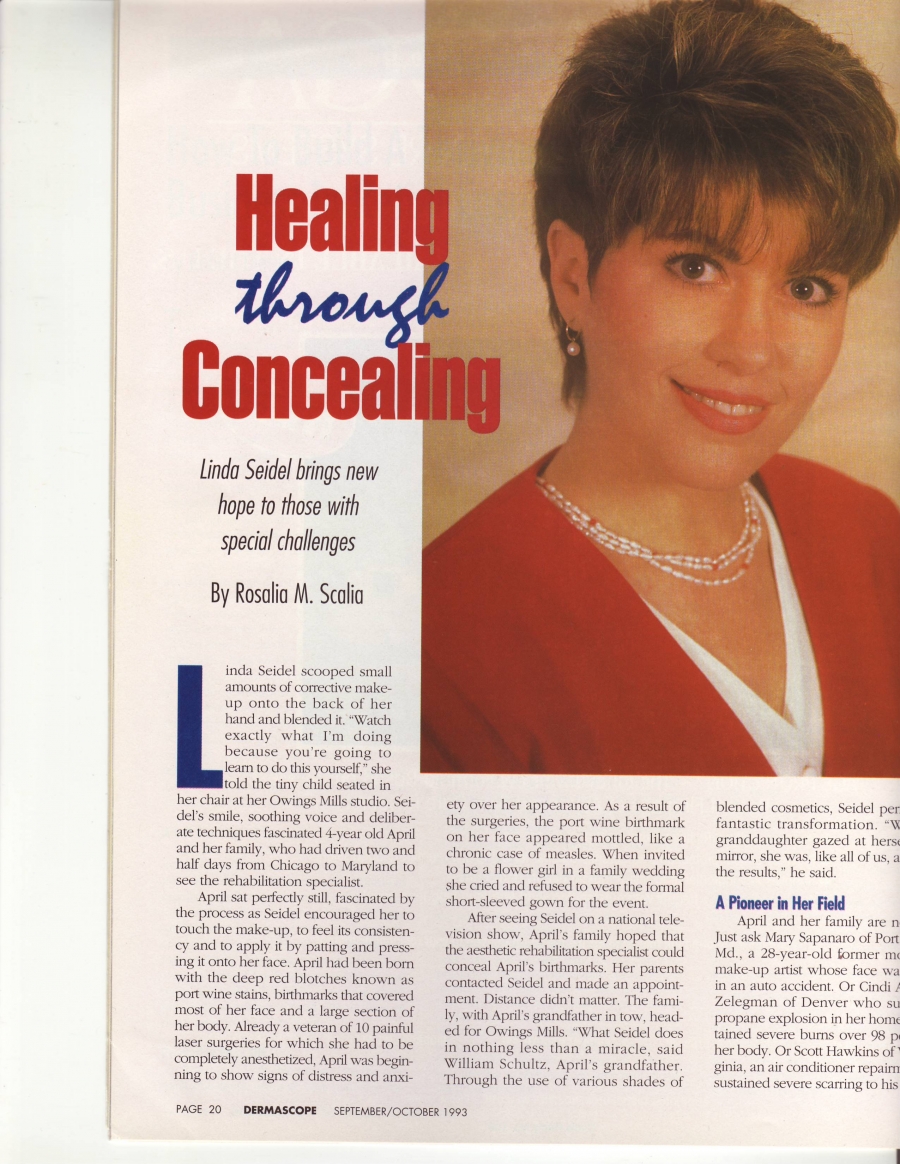 Linda Seidel- A Legend in Aesthetics

Healing through Concealing Linda Seidel brings new hope to those with special challenges.

Linda Seidel scooped small amounts of corrective makeup onto the back of her band and blended it. “Watch exactly what I am doing because you are going to learn to do this yourself,” she told the tiny children seated in her chair at her Owings Mills studio.  Seidel’s smile, soothing voice and deliberate techniques fascinated four year old Aril and her family, who had driven two and half days from Chicago to Maryland to see the rehabilitation specialist.

April sat perfectly still, fascinated by the process as Seidel encouraged her to touch the makeup, to feel its consistency and to apply it by patting and pressing it onto her face.  April has been born with the deep red blotches known as port wine stains, birthmarks that covered most of her face and a large section of her body.  Already a veteran of ten painful laser surgeries for which she has to be completely anesthetized, April was beginning to show signs of distress and anxiety over her appearance.  As a result of the surgeries, the port wine birthmark on her face appeared mottled, like chronic case of measles.  When invited to be a flower girl in a family wedding she cried and refused to wear the formal short-sleeved gown for the event.

After seeing Seidel on a national television show, April’s family hoped that the aesthetic rehabilitation specialist could conceal April’s birthmarks.  Her parents contacted Seidel and made an appointment.  Distance didn’t matter.  The family, with April’s grandfather in tow, headed for Owings Mills.  “What Seidel does in nothing less than a miracle, said William Schultz, April’s grandfather. Through the use of various shades of blended cosmetics, Seidel performed a fantastic transformation.  “When my granddaughter gazed at herself in the mirror, she was. Like all of us, amazed at the results,” he said.

A Pioneer in Her Field

April and her family are not alone.  Just ask Mary Sapanaro of Port Deposit, Md., a 28 year old former model and makeup artist whose face was injured in an auto accident.  Or Cindi Andrews-Zelegman of Denver who survived a propane explosion in her home but sustained severe burns over 98 percent of her body.  Or Scott Hawkins of West Virgin, an air conditioner repairman, who sustained severe scarring to his face and chin in an accident involving Freon.

Seidel’s “magic” draws people from across the nation, Canada and beyond, who have suffered from accidents that result in disfigurements or from unsightly birthmarks.  They come to Seidel in an effort to lead normal lives that allow them to blend I easily with society rather than stand out.  And it is no wonder they come to Seidel.  As the nation’s leading rehabilitation specialist - a field she pioneered - Seidel demonstrates her commitment and dedication each time new clients find themselves at her studio.

“Linda is able to look beyond to the inner person and is somehow able to bring that forward,” said Sapanaro. “What she does goes well beyond applying makeup to people’s faces and bodies.  I know.  I used to do that for a living - make up faces.  Linda plays a vital role in the healing process and she help people she touches to feel whole again, which is so important after losing so much,” she said.

Seidel offers an easy explanation for the gift. “This first time I see a person who needs corrective make up, in my mind’s eye, I can already picture how that person will look when I am finished,” she said.  “Working with people who are disfigured gives me a great deal of inspiration and energy levels, where as I sometimes fell drained when I am doing a simple glamour make-over,” she said.

Seidel, 44, began her career almost 20 years ago as a glamour make-up artist in Baltimore.  She had no idea that her divergent path would lead her on a journey from which she would not return.  It began when a client with a tiny scar in the middle of her cheek felt dissatisfied after a typical glamour make-over.

“I covered the scar the best I could with conventional make-up, and then dismissed it because it was so tiny.  But the women keep asking me, “Couldn’t you cover it up better?”  And I realized after awhile that no matter what I did to conceal the scar (which no one else would have noticed anyway) it would not have been enough.  She was so focused on that scar that she couldn’t see beyond it or around it,” said Seidel.

Through the course of that disturbing session, Seidel realized that the scar, however invisible to anyone else, had become the focal point for this woman and an insurmountable obstacle in her ability to feel attractive.

A week after that session, another client, who then anchored a local television talk show, told Seidel about a plastic surgeon recently interviewed on her show. He had mentioned a product that could conceal scars.  “As soon as this woman told me there was such product available, a light bulb went off in my head, and I knew that corrective makeup was the direction I must pursue,” she said.

Motivated by a keen fascination for the art of transformation and the physical change she could create on faces. Seidel realized that such a product would enable her to help clients like the disappointed woman who could not see past her scar.  “Back then, I wanted to help people look and feel better.  I had no idea how life-changing this could be for someone struggling with the way they looked, or for me,” she said. “I intended to help people suffering with a poor self-image because of scarring and birthmarks, but I had no idea how deeply this new direction would impact my own life.”

Businesswoman on the Rise

Seidel made it her business to research this product and incorporate it into her work at the salon.  She also made it her business to market her new capabilities to area surgeons and dermatologists by calling each one listed in the phone book.  It took months before the first client was referred by Dr. John Hoops, a plastic surgeon at Johns Hopkins Hospital.  In the meantime, she had continued her work at the salon, perfecting her skills with the corrective make-up product.

The referral, whom we all call Asia, was in her 30’s and had a raised port wine stain birthmark covering half of her face.  “The woman was elated with the results, and I thought the experience was great.”