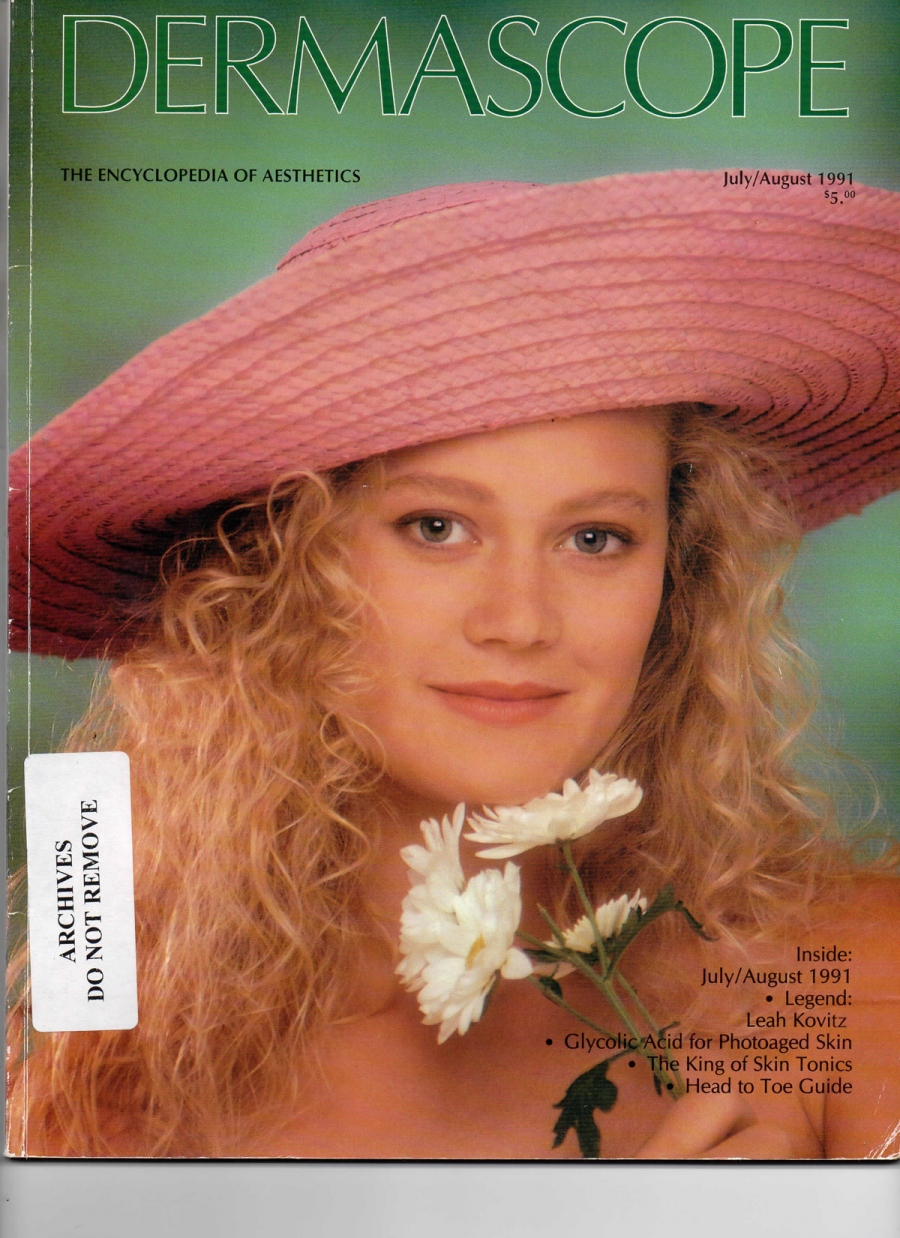 It is difficult to reconcile the two pictures of Leah Kovitz.  The first image is of one of the world’s leading aestheticians: a graceful, cosmopolitan, multi-lingual beauty, elegantly attired to greet guests at one of her resort’s spa salons. The other is that of a soldier, dressed in drab fatigues and clunky boots, sitting under an ancient olive tree, diligently cleaning her Uzi machine gun.

These two pictures reflect only a small part of this man-faceted Israeli beauty.  She is a true legend in aesthetics, in body treatments, in paramedical make-up, and in the operation of skin care centers at two world-class resorts.

“Growing up in Israel, I just accepted that army duty was part of life,” explains Leah, reflecting on the second picture.  “Here in the U.S., 18-year-old girls are still trying to find themselves, applying to colleges or thinking about jobs and family.  We‘re forced to mature quickly in Israel.  We don’t get to think about career or family choices until we are 20 or 21, after our two years of military service.”

In fact, thought, Leah had already begun to prepare for a teaching career before the army.  Through an advanced program, she was allowed to finish her last year of high school while completing her first year of teacher’s training college.  And she was also working at the same time.

“Looking back now, I wonder how I was able to do it,” says Leah.  “Maybe because I was 17 years old, I didn’t know that It couldn’t be done.”

Leah remembers finishing high school classes in the morning, jumping on the bus in Holon, a suburb about five miles south of Tel Aviv, and riding to the teacher’s college on the north side of the city.  Then, in the evening, she would race back to her hometown where she was a recreation leader at the municipal youth center.

Everyone who has heard Leah speak at one of the many international aesthetic congresses knows how comfortable she is on a stage, and no wonder.  In addition to all of her other activities, Leah studied drama with famed Israeli director/producer Menachem Golan, and also pursued training in modeling and make-up.

“I really believe that the turning point for me was my teenage years, when I discovered my artistic side,” Leah confides.  “Unfortunately, serious acne also discovered me, and I have promised ever since then to pay special attention to the skin care needs of teenager.”

Leah survived army basic training (“the best and worst experience I have ever had!”)  and was assigned to the Communications Corps. She eventually ended up in the infamous Gaza Strip due to her ability to speak Arabic, in addition to Hebrew and English.

Discharged from active duty in May 1967, she was immediately called back into service weeks later when Israel entered the Six-Day War.  Once again, she was assigned to Gaza to work in Legal Affairs.  Eventually, she was selected for a civilian post as the assistant director for the Port Of Gaza.

By 1970 it was time for a break, and Leah rewarded herself with a trip to Belgium, she met and married her husband, Bob, who was then stationed at NATO military headquarters.  A two-month jaunt to Europe turned into a two year stay that included marriage, and additional study of European aesthetic techniques.

“Marrying a soldier and moving to the U.S. were the furthest things from my mind,” Leah explains, laughing.  “I had just never pictured myself as an American wife.”

While Bob finished graduate school in Los Angeles, Leah taught Hebrew in various schools throughout southern California.  She also attended Moorpark College, where she was awarded her associates degree with honors in 1977.

That same year, Leah began work in various salons, performing facials and giving make-up lessons.  In 1978 she was introduced to Sheila Cluff, owner of The Oaks at Ojai Spa, who immediately employed Leah as the resort’s skin care specialist.  At the same time, Leah joined a prestigious plastic surgery group in Westlake Village, California, where she did preoperative counseling and post-operative make-up.

This hard working and caring aesthetician recalls: “Those were extraordinary times.  I would observe the surgery in the operating rooms premises.  And I was there when the patients returned for advice on disguising scars, discoloration and swelling during the healing periods.  I am sure that I saw every part of the human body pinched, tucked, lifted or folded!”  She also gained valuable experience in make-up for burn victims and cancer patients.

Then, in 1978, Leah gambled on an opportunity that contributed to her rise to the top of her profession.

“One of the frequent guests at The Oaks at Ojai, Mel Zuckerman, had an idea for a state-of-the-art health and fitness resort in Tucson, Arizona.  He offered me the opportunity to become the resort’s first skin care director and to develop my own line of products and treatments.”

Leah and Bob moved to Arizona in 1979 and formed New Image by Leah, Inc., with Leah as company president.  Leah traveled back to Israel and worked with laboratories in her home county to create the New Image by Leak skin care line.

“I was very insistent that the line be tailored for different skin types, from normal to oily, from dry to delicate,” states Leah.

“And I also wanted the absolute minimum fragrance.  I believe that skin care products should do what they say---- clean, tone or moisturize.  If a client wants a particular scent, I encourage her to spend her money on her favorite perfume.

As the resort grew and prospered, Hollywood stars and world-famous celebrities bought Leah’s treatments.  Over the past twelve years literally tens of thousand of guest have enjoyed the aesthetic experiences of the Canyon Ranch Skin Care Department.

In 1982 Leah began the search for a truly innovative body treatment, one performed without expensive machines or loofah sponges, one that combined both overall cell sloughing plus the benefits of massage.  After visits to France and her native Israel, Leah developed the now famous “Parisian Body Polish.”

“The body Polish proved to be even more successful than I had ever imagines,” says Leah.  “The idea of a cream with a crushed pearl massaged all over the body was an instant hit at Canyon Ranch.”

The demand for the treatment became so intense recently that Leah has now had the Parisian Body Polish treatment and cream trademarked by the U.S. government.  Since it is now available to other salons, the trademark provides aestheticians protection against imitators.  Only the “Parisian Body Polish” is the true treatment created at Canyon Ranch by Leah.

Leah also introduced the Thermal Youth Mask (manufactured in Israel) to Americans in 1980, and she has developed and taught body facial classes at aesthetic congresses throughout the United States and Europe.  Her treatments have been featured in virtually all the media, including Time, Newsweek, W, Harpers Bazaar, The Spa Book, and via numerous television appearances.

In 1985 New Image by Leah, Inc. was selected as the operator of the Personal Services Venter at The Westin La Paloma resort in Tucson.  This world class hotel features a Jack Nicklaus golf course and a personal care facility under Leah’s management with nine separate treatment rooms.  Massage, skin care and nail appointments are available seven days a week.  With the addition of La Paloma, the New Image by Leah staff grew to about 28 employees.

Personal setbacks often have a unique way of impacting professional life.  Nowhere is this more apparent than in the National Cosmetology Association’s “Look Good/Feel Better” campaign to assist cancer patients.  The program was just getting started when Leah learned that her older sister required a radical mastectomy.  Leah flew to Israel to be with her sister during the recovery period, and then insisted that her sister join her at the 1989 NCA Congress in San Francisco where “Looking Good/Feel Better” was introduced.

Leah confides, “The combination of being able to help a family member, contribute to a meaningful charity, and utilize my aesthetic skills has been especially rewarding.  I am proud of the work we are doing here in Tucson with the American Cancer Society and the University of Arizona chapter of the American Cancer Society has named Leah as the skin care coordinator for the entire state’s “Looking Good/Feeling Better” program.

In whatever spare time is left over, Leah enjoys watching her seven-year-old son Eric participate in a year round sports schedule that would make Bo Jackson envious.  Leah is also studying her fifth language, Spanish, so that on future trips to nearby Mexico, when the waitress asks her what she wants to eat, they will get an answer from her (rather than from “my fair-skinned, blue-eyed husband!”) jokes Leah.

Leah has been appointed skin care consultant for the new Canyon Ranch in the Berkshires (in Lenox, Massachusetts) where she will be teaching facial and body treatment techniques as well as helping to maintain the high standards expected by resort guests.  And, to round things out, Leah will continue to lecture and teach around the world and to assist salons, day spas and resorts in introducing new treatments.

“I can’t think of any other field that could be as rewarding to me as aesthetics,” says Leah with sincere passion.  “I’ve had the chance to meet and work with such a wide variety of people --- from resort guests to surgery patients, and from talented aestheticians to outstanding medical practitioners.  What could be more exciting than helping people to improve their self-image through proper skin care and make-up?”