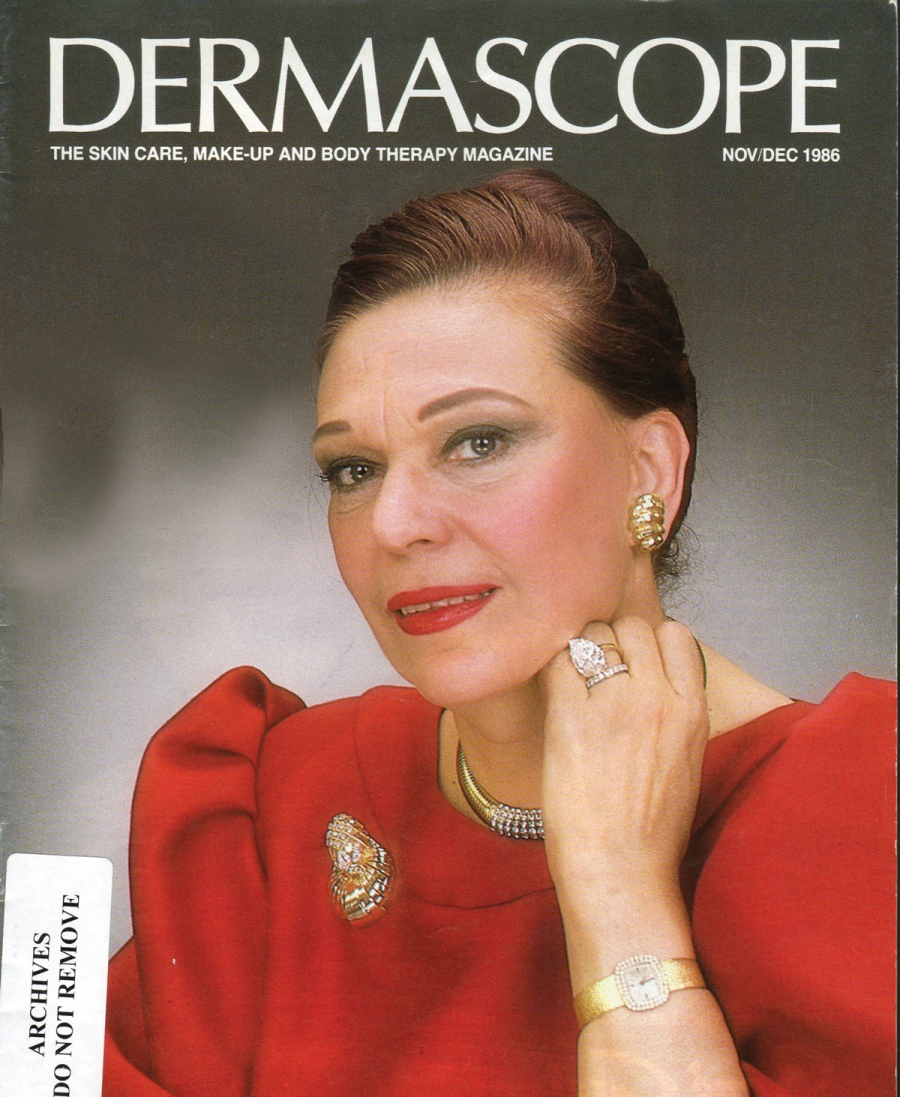 Christine Valmy has dedicated her life to youth and the ultimate in skin care.  She is the originator of the skin care industry in this country, a fact which led the 92nd Congress of the United States to award her a citation for fostering skin care as a profession in America.

Because of this and countless other international and national achievements and the unique skin care breakthrough credited to her, Christine Balmy has earned the undisputed reputation as the worldwide authority in her field.  Her success is not a personal one but the creation and history of scientific skin care as it exists in the United Sates today.

Christine Valmy was born in Bucharest, Romania where she earned a law degree from the University of Bucharest and a cosmetology degree from the Medical School in Bucharest.  After she left Romania she immigrated to the United States in 1961 arriving as so many other immigrants, penniless and unable to speak the language.  She had with her a young daughter and her parents for whom she was the sole support.

As soon as she arrived in this country she realized that the main purpose of cosmetics here was to cover up skin imperfections, an antiquated approach when compared with the standards of Europe.  Valmy devised her own now famous techniques, the “Valmy” method, with a philosophy “to reveal not to conceal” the natural beauty of a health, well-functioning skin.  Her method achieves a fare aching goal of slowing down the biological aging process by scientifically restoring the skin’s natural functions from the inside to the outside.

As “preacher in the desert”, Valmy realized from the beginning she would not be successful in her philosophy unless she convinced the legions of women and men dedicated to beauty to cooperate in pioneering and spreading her ideas.  That was to eliminate the then accepted antiquated care of the skin by covering it with heavy coats of foundation and makeup and reach toward the highest level in the world, as we know it today, by utilizing the most progressive scientific methods available.   Her first step was to create an American association of skin care specialists (estheticians). An association that gained the respect of the international body of skin care CIDESCO, the International Committee of Esthetics and Cosmetology with headquarters in Zurich Switzerland.  Today the United States is a strong member of this international organization with a group of over ten thousand (10,000) estheticians throughout the States.

Christine Valmy is currently the representative of the Esthetics America in CIDESCO.  The fast growth of esthetics in the United States is due to Christine Valmy’s foresight that the profession will grow only if well trained skin care specialists will offer these unique services to the public.  In order to accomplish this Christine Valmy opened in June 1966 in New York the first skin care school licensed in the United States.  In the future when history of skin care is written, it will be noted that after a slow start, Valmy’s New York School has graduated over ninety percent of the practicing skin care specialists (estheticians) in this country.  In recognition to her contributions in the education field, the President, Ronald Reagan has appointed Christine Valmy as a member of the National Council of Vocational Education, a council created by a mandate of the Congress, the Carl-Perkins Act, to advise the President and the Congress of the needs and the role of vocational education in this country .  By creating new job possibilities with new skills Christine Valmy has contributed to the growth of the national economy as it can be seen from a letter sent to her on behalf of the President Lyndon Johnson.

Today, twenty years later, Christine Valmy represents the ideal of the American dream, when an immigrant without financial means or knowledge of a new country can reach the summit of her profession by presiding over a company that operates the largest chain of specialized skin care salons in the world, a multi million dollar company that has the prestige of the leader of the skin care industry in the United States.

Christine Valmy has many interests that prompted her participation in more than one organization.  Recognized for her outstanding qualities, her charm and especially her integrity, Christine Valmy is today member of many boards of different groups Christine Valmy is a trustee of the world famous People to People International, an organization that was founded by President Eisenhower to promote friendship and understanding in the world; she is a trustee of the board of the American Beauty Association (ABA) representing all manufacturers of beauty salon suppliers of equipment, hair and skin care products she is chairman of the National Association of Esthetic Equipment Manufacturers and a leader and member of Esthetics America, the skin care branch of the largest organization of beauty specialists and cosmetologists in the world, the National Cosmetologists Association (NCA)

Christine Valmy is currently listed in Who is Who in the East.  Christine Valmy was awarded, in April 1968, the highest honor of the French Congress of Esthetics held in Versailles, for special merit in promoting the esthetics profession in the United States.  She also was given an award as the outstanding Republican Ethnic Woman of the year in 1981.  The 1976, President Gerald Ford nominated Christine Balmy as the Business Person of the Year for the State of New Jersey, where her plant and laboratories are located.  In 1972, Christine Valmy received the highest CIDESCO International award, the “Medaille de Merit” for her outstanding contributions to the international world of esthetics.  Currently, she is also chairman of a politically active group of former Romanian immigrants name “Concerned  Romanians For A Strong America” and is the chairman of the Women’s Committee of the National Republican Heritage (Nationalistic) Council.

The history of scientific skin care belongs to the world.  Its beginnings are based on the perseverance of a penniless immigrant who overcame seemingly insurmountable odds because of her beliefs… it is the continuing sago of a quiet, unassuming woman of charm and intelligence who reached the pinnacle of her profession... yet continues to be personally involved in the improvement of the industry she founded.

It is the story of a woman presiding over some of the worlds most beautiful and professional skin care salons in the world carrying her name.  The history of skin care in the U.S.A. is Christine Valmy’s story.