Carmen Delgado- A Legend in Aesthetics 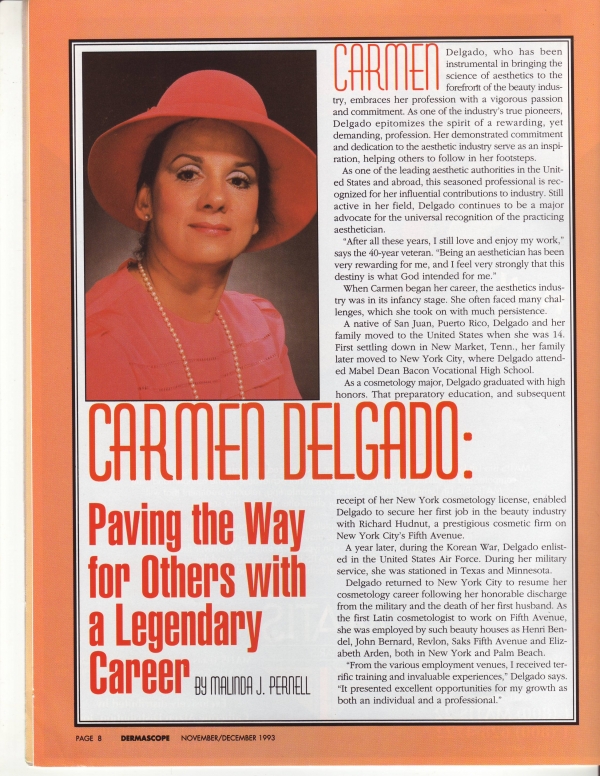 Carmen Delgado- Paving the Way for Others with a Legendary Career

Carman Delgado, who has been instrumental in bringing the science of aesthetics to the forefront of the beauty industry, embraces her profession with a vigorous passion and commitment.  As one of the industry’s true pioneers, Delgado epitomizes the spirit of a rewarding, yet demanding, profession.  Her demonstrated commitment and dedication to the aesthetic industry serve as an inspiration, helping others to follow in her footsteps.

As one of the leading aesthetic authorities in the United States and abroad, this seasoned professional is recognized for her influential contributions to the industry.  Still active in her field, Delgado continues to be a major advocate for the universal recognition of the practicing aesthetician.

“After all these years, I still love and enjoy my work,” says the 40-year veteran.  “Being as aesthetician has been very rewarding for me, and I feel very strongly that this destiny is what God intended for me.”

When Carmen began her career, the aesthetics industry was in its infancy stage.  She often faced many challenges, which she took on with much persistence.

A native of San Juan, Puerto Rico, Delgado and her family moved to the United States when she was 14.  First settling down in New Market, Tenn., her family later moved to New York City, where Delgado attended Mabel Dean Bacon Vocational High School.

As a cosmetology major, Delgado gradated with high honors.  That preparatory education, and subsequent receipt of her New York cosmetology license, enabled Delgado to secure her first job In the beauty industry with Richard Hudnut,   a prestigious cosmetic firm on New York City’s Fifth Avenue.

A year later, during the Korean War, Delgado enlisted in the United States Air Force.  During her military service, she was stationed in Texas and Minnesota.

Delgado returned to New York City to resume her cosmetology career following her honorable discharge from the military and the death of her husband.  As the first Latin cosmetologist to work on Fifth Avenue, she was employed by such beauty houses as Henri Bendel, John Bernard, Revlon, Saks Fifth Avenue and Elizabeth Arden, both in New York and Palm Beach.

“From the carious employment venues, I received terrific training and invaluable experiences,” Delgado says.  “It presented excellent opportunities for my growth as both an individual and a professional.”

Stimulated to continue her professional education, Delgado enrolled in Pratt Institute, a technical college in Brooklyn, N.Y. It was here where she learned the European concept of skin care, studying with the famed makeup artist Christine Valmy and renowned fashion photographer, Francesco Scavullo.  She also served as an image and makeup consultant for clients like Breck Shampoo and Emilio Pucci.

In1964, to advance the standards of the aesthetics profession, Delgado and 11 colleagues, including Valmy, founded the American Association of Esthetics, the first national association for skin care professionals.  Delgado served as the organization’s first secretary.

But to provide a more tranquil family environment for her son, John Robert, Delgado moved to Bloomington, Ind., in 1968.  Aesthetics was an unfamiliar profession in Indiana and she soon realized the monumental challenge of introducing the advantages of aesthetic services and training to the public.

“It was during this facet of my career when I had to think globally and act locally,” Delgado recalls.

Accepting her mission with determination and dedication, she used all available media avenues as an educational platform.  She organized lectures for local cosmetologists who expressed an interest in aesthetics. Later, in 1971, Delgado opened her European aesthetic clinic in Bloomington, the first of its kind in Indiana.

As interest grew in the profession, she organized and introduced chapters of AIA, SCAA and CIDESCO to the state, serving as regional director for each.  The resounding success of her Bloomington clinic and the increasing popularity of aesthetics allowed Delgado to open her second clinic in Indianapolis six years later.

In 1978, Delgado was the first American aesthetician to earn a CIDESCO International Diploma by direct examination, which she considers to be the highlight of her accomplishments.  Also, in the same year, as a mater cosmetologist, she received her cosmetology and aesthetics instructor’s license.

In 1981, Delgado accepted an invitation to implement and direct the Oasis Spa in French Lick, Ind.  Under her direction, the spa received national recognition for its innovative skin treatment programs, comparable to services offered by European spas and health resorts.

Always an avid supporter of stability for the skin care professional, Delgado, along with the Indiana Cosmetology Association, its lobbyist, Richard Harris, and other sympathetic professionals, campaigned aggressively for the establishment of a separate aesthetician license in Indiana.

However, their effort was confronted with widespread resistance from cosmetologist and beauty school owners, who were unsure of the effects of the proposed changes.  “Based on the status at that time, most individuals who were interested in pursuing a career in aesthetics could not afford to leave the state or country to study, and, the establishment of the license would eliminate the roadblock,” Delgado said.  Fortunately, the goal was realized in 1990 when the Indiana Generally Assembly passed the aesthetician license law.

Devoted to the concept of advanced professional training, Delgado continues to be in high demand on statewide, national and international lectures circuits, lending her expertise, knowledge and experiences.

“The learning never stops for the professional aesthetician,” Delgado says.  “One must abreast of the latest trends and developments in the profession and share that knowledge and expertise with colleagues and clients.”

She also assisted in implementing continues education programs for aestheticians at Purdue University in West Lafayette, Ind., and she is an active member of the Educational Committee, Aesthetics Section, of the Indiana Cosmetology Association. “It’s always a pleasure for me to share with others my experiences,” she says. “By doing so, I hope it will encourage them to make their own opportunities in the industry.

“I feel that it is our responsibility, as professionals, to further our education and to keep abreast of all scientific research and trends which may impact our profession,” she added.

This is why Delgado continues to enroll in carious advanced aesthetic courses that are offered throughout the country, Europe and Japan.  She also feels that it is important for aestheticians to join and be active in professional associations and to take advantage of trade publications and journals, lectures and conventions.

As an active patron of many community and political cause, Delgado participates in the Indiana Hispanic Chamber of Commerce, where she served as a vice president.  She is also one of the founding members of the Hispanic Republican Round Table, an advocacy organization addressing the needs and concerns of Hispanic citizens in Indiana; and, she serves as a board member of the Hispanic Advisory Committee for DePauw University, Greencastle, Ind.

Delgado credits her husband of 20 years, Dr. Kenneth Trourentrend, for many of her accomplishments, noting his constant encouragement and invaluable expertise as a researcher on skin properties and anti-viral agents.

As a team, they have been able to implement a successful statewide training seminar, simply titled Heath and Beauty, where medical professionals share their knowledge with aestheticians.

With help from her husband, Delgado also initiated the effort to establish a federal classification number through the Employment Security Commission for the aesthetics profession.  Through their perseverance, they were able to obtain a temporary number, and in August 1993, Delgado and her husband fulfilled their goal for a permanent professional classification number for aestheticians.

As for her thoughts on surviving in the industry, Delgado encourages ethical behavior, active community and political participation and continued education.  “Don’t be afraid to share your knowledge and become actively involved in the community,” she says.  “The more you give, the more you will receive!”

iS UNIVERSITY is dedicated to providing industry professionals with on-demand and unbiased aesthetic education. Our cutting-edge, educational platform is exclusively… Read More

Learn new techniques and discover new possibilities. Aesthetic VideoSource has built a reputation of service and quality as the best… Read More

Agape Pure Wax offers the purest and highest quality waxes on the market. Clients fall in love with the results… Read More