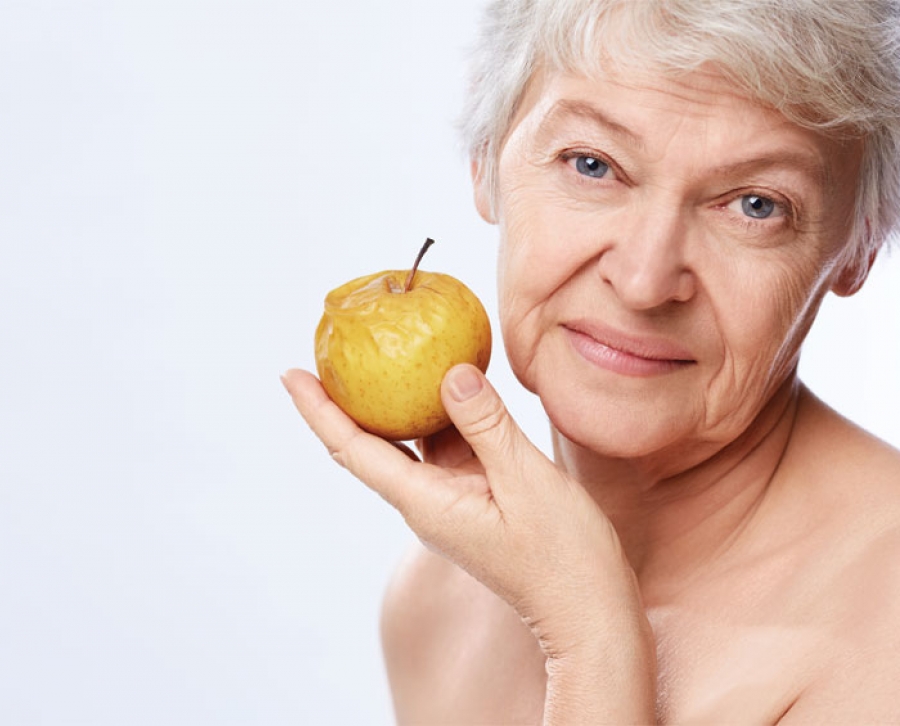 Sometimes the most obvious things in life go unnoticed. We see many wrinkles every day, but ask someone to define a wrinkle, and usually the answer is “Well, everyone knows what a wrinkle is.” We need to look at the microscopic anatomy of the skin to study the basis of the wrinkle which is often like the hole in a doughnut; it only exists by virtue of what surrounds it.

The wrinkle appears to start in the papillary dermis as a result of decreased elastin production, or possible chemically altered elastin. These are very fine changes in the histological picture, not readily visible even to a well-trained eye, but the result is seen in the appearance of the skin. There is loss of tone or elasticity, which gives the skin surface a rather dull hue. Compare the skin of a healthy child with that of an adult and you will immediately appreciate the difference. Beyond this subtle microscopic change, significant findings have been reported to be associated with the origin of the wrinkle.
Grossly, on the surface we see the wrinkle as an abnormality in the smooth skin surface. We look for an even, unbroken, smooth surface but the wrinkle presents us with a fault, a crease, crevice or crevasse. The skin is loose, lacks turgor, and presents no springy feel to the touch. This is aging skin and it is a natural progression. But what causes
this progression? 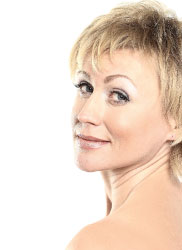 The Biological Clock versus
Environmental Insult Theory
There are two theories of aging: the biological clock and the environmental insult theory. The first theory holds that aging is a physiological process which is coded in the DNA and is expressed at specific times. Old age is understood as the last and final stage of tissue differentiation. The onset of puberty and the graying of hair are two unmistakable events that occur with the passage of time. The limited life span of cultured cells from mammals is often set at 50 cellular divisions. When grown in tissue culture, skin cells taken from older individuals divide less often than cells taken from young individuals. There is obvious truth to this theory, but it does not account adequately for the large variation found among individuals in ethnic groups and among lifestyles.
The environmental insult theory is a complex theory, but in essence, it views old age as an “accident,” caused by an accumulation of biological “errors,” occurring during the lifespan of the person. We know that ultraviolet light, poor nutrition, mental and physical stress all contribute to the final physical appearance known as aging. Whatever the cause, or causes, the final result in aging is a reduced functional capacity of the body, both for maintenance and repair.

The Picture of Aging Skin
Aging skin is characterized by many physical factors, but the most prominent finding is loss of tone or turgor. Color pales due to loss of reflectivity. The surface of the skin is no longer smooth and the many mottled areas appear. Each of these characteristics represents some physiological and anatomical change. Let us look at each of these, but we shall emphasize loss of tone manifested by wrinkles.

Physiological Changes
Skin color is a composite phenomenon resulting from the following factors: blood flow, skin pigments such as melanin, carotene, bilirubin and oxidation products, condition of the outer surface cells and the presence or absence of various skin lesions. The melanin content decreases with time, and the oxidative pigments, called lipofuchins, increase. Decreased blood flow is not a major factor in the face, but it is in the hands and the feet. The skin surface cells become larger and less reflective, while the thinning epidermis also becomes less reflective.

Anatomical Changes
As skin ages, anatomically the dermis is less flexible, less succulent and responsive. The immune response is slower and less exact. All in all, there is a decrease in the ability to launch an effective repair offensive against these negative factors. The fibroblast seems to have given up the battle; for a while it continues to function, making collagen and elastin, and it does so in a perfunctory manner. All this results in the formation of wrinkles.

Natural History of Wrinkles
We start to age the very minute we are born. It is a hostile outside world with which we shall struggle all the years of our life. Changes are present, but not great until about age 25, the time of early eye changes. The eyebrow moves down and fat in the lower lid starts to bulge as the elastin retaining wall is weakened. The nasolabial folds increase in
both depth and length at age 30, followed by crow’s feet and forehead wrinkles about 10 years later. Of course, some unfortunate persons show these signs at an earlier date. At 50, nature seems to begin to give up the struggle and we find a drooping nose, sloping eyes and wrinkles around the mouth and neck.
Fat absorption now occurs so that the cheeks become hollow, the eyes appear smaller, and the bone mass of the skull becomes less. The excess skin folds and bends and produces a complex pattern of wrinkles. In those individuals with high sun exposure, a dreadful landscape appears, characterized by a plethora of deep, dark wrinkles.

Skin, Wrinkles and Muscles
Wrinkles are of three types:

The cause of all wrinkles is linked to loss or denaturing of elastin, but wrinkles can be accentuated by further changes in the dermis. Try to picture the wrinkle as the visible result of a foundation collapse. They are the result of dermal sinkholes. Where the skin is thinnest, we see the smallest wrinkles because the skin surface has only a small distance to collapse. Deep wrinkles can occur only in thick skin; this is why sun damaged skin shows such horrendously deep wrinkles.
The skin is held onto the body by strong, fibrous bands called fascia. The fascia connects the dermal part of the skin to the muscles. When we smile, the skin is moved about by the muscle around the mouth. If there is excess skin which is neither elastic nor resilient, it will fold over, causing a deep wrinkle. Wrinkles are never reduced when a muscle is contracted – they can only be intensified or accentuated.
Consider also that a wrinkle always runs perpendicular to the long axis of a muscle. Next, consider that contracting a muscle will shorten the length of the muscle which, in turn, will throw the attached loose skin into many folds. Thus, one can only accentuate wrinkles by contraction of the muscles. 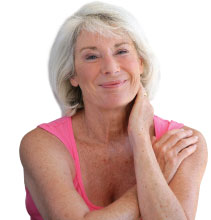 Known Causes of Wrinkles
Many skin physiologists believe that a wrinkle is not necessarily a normal consequence of the aging process. Rather, the evidence points quite strongly to environmental influences. Chief among these is the ultraviolet light coming from the sun. Excessive sun exposure is well established as the major inducer of wrinkles. There is some evidence to suggest that visible light may also be harmful in producing damaged skin.
The major target of the high-energy photons of ultraviolet light is the deoxyribonucleic acid (DNA) molecule. This energy of UVB (290 to 320 nm) has both a direct and indirect effect on the DNA molecule. In the direct effect, the high energy photons interact directly with DNA to denature the molecule. This often leads to cell mutations or cancers.
The indirect effect can occur with both UVA (320 to 400 nm) and UVB. The photons react with biological molecules that are photosensitizers, such as the flavins compounds and porphyrins. These are highly colored molecules that serve many functions in the body. This interaction produces free radical species that can interact with DNA.
Smoking cigarettes produces an astronomical number of free radicals with each puff. The number is approximately 1x1017. This is too large a number to understand by itself, so here is a concrete example: let us say that one free radical is the same as one carpenter ant. I estimate that in a one gallon jar you could put about 30,000 average size carpenter ants, not comfortably but pressed gently. Now we can take off 104, leaving us with 1013, still a very large number because we are looking at 10 trillion gallons of ants, or 100 billion truck loads of ants. It is no wonder that smoking is so damaging to the skin; the body simply cannot cope with an insult this large.
Inadequate intake of proper nutrients deprives the body of many of the essential maintenance and repair materials. Vitamins and minerals are needed in adequate amounts to offset the effects of poor nutrition. The excessive intake of calories appears to have some effect on general aging. This has been shown by those who restricted food intake lived significantly longer than the other well-fed group. How this relates to skin health is not yet known, but it must in some way relate to increased oxygen utilization for the whole body which means more free radicals for the skin as well.

Skin Aging and Skin Color
Melanin is a major skin pigment. Its role in aging remains a mystery. Graying of the hair is a sign of aging, as the melanocytes cease to exist in the hair bulb. Why? What turns this process on and off? We know that melanin can scavenge free radicals but there is more evidence that the real protective agents are antioxidants. We also know that melanin absorbs many forms of energy, including ultraviolet rays, and releases this energy as heat. However, when the energy exposure is too great for the melanin to absorb, it will produce free radicals itself! What then is the actual role of melanin in the body? We remain uncertain. There are less melanocytes in older skin. Why? Again, we have no answer.

Time and The Skin
Keep in mind that skin is dynamic and fluid. It is changing constantly and that means that it is subject to influence from both the inside and outside. Physiological changes are often slow and imperceptible; only in diseased states do we observe dynamic visible changes. As the aging changes progress, they can be slowed even further, perhaps halted, and hopefully reversed. 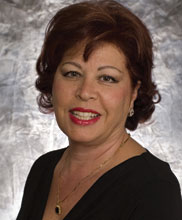 Sonia Boghosian has been involved with the spa industry since 1984. It is due to her continuous support of the aesthetics industry that cell therapy, DNA therapy, and the use of ultrasound and microneedling are now available to aestheticians and their clients. Boghosian is the president and CEO of Bio Jouvance Paris, Europro Equipment, and the International College of Beauty Arts and Sciences. She has also owned and operated many spas. She conducts yearly conferences and expositions for skin care professionals and is a guest speaker for multiple industry-leading tradeshows worldwide. Boghosian is also an active contributing editor to industry magazines and co-editor of many informative articles.